News and Analysis News Stocks Kakao IPO: should you invest in the Korean online bank?

Kakao IPO: should you invest in the Korean online bank?

The $2.2bn listing could make the company the third most valuable lender in South Korea, after KB Financial Group (105560) and Shinhan Financial Group (055550). The IPO is the latest in a string of South Korea companies going public, following e-commerce firm Coupang’s (CPNG) listing in New York in March and ahead of several large shipping and technology firms.

This Kakao IPO analysis provides an overview of the company’s background and all the details you need to know about the listing to decide whether to invest when the stock starts trading next month. 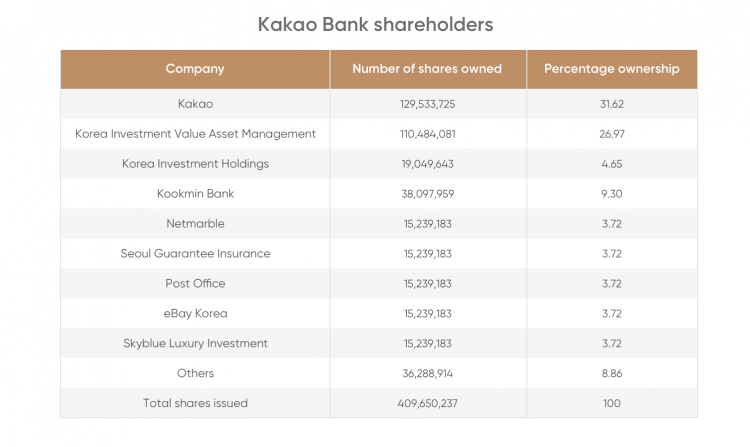 Kakao Bank launched its mobile-owning banking service in July 2017, and had signed up 1 million accounts within its first five days of operations, the company said in an official statement on its website. It surpassed 10 million customer accounts in July 2019 and had 16.53 million at the end of May 2021.

The company is now expanding its demographic to older customers, as 30% of customers opening a new account in the past year were over the age of 50.

The number of monthly active users (MAUs) for the company’s mobile application reached 13.35 million at the end of March 2021.

As of the first quarter of 2021, Kakao Bank's profit-to-income ratio was 48.3%, which is lower than the average of the major domestic South Korean banks, the company said in its statement.

Over the same period, the deposit and loan growth rates for the domestic South Korean banks were 9.0% and 8.0%, respectively.

Kakao Bank is the latest of the Kakao Corp subsidiaries to go public. Its gaming division Kakao Games (293490) went public in September 2020, while its mobile payments business Kakao Pay has received preliminary approval from the Korean financial regulator for its upcoming listing.

Kakao IPO: everything you need to know

Unlike fellow South Korean Internet-based company Coupang, which is listed in the US, Kakao is going public on the Korea Exchange. The Kakao IPO date is scheduled for the first week of August, with the stock debuting on 6 August. The business announced on 28 June that it had submitted its securities declaration to the Financial Services Commission for the share listing.

KB Securities, Credit Suisse and Citigroup Global Market Securities are the financial institutions that are organising the listing.

The Financial Times reported earlier this month that there were concerns about Kakao Bank’s high valuation. The South Korean Financial Supervisory Service (FSS) has probed the IPO valuations of several companies – including gaming firm Krafton and COVID-19 testing kit maker SD Biosensor – and requested they refile their prospectuses with lower offering prices.

Kakao Pay, which is South Korea’s largest online payment company, was also required by the regulator to revise its IPO prospectus.

Kakao Bank said it plans to use the proceeds from the IPO to provide capital support for new products and services, such as expanding credit loans for low- to mid-credit customers and mortgage loans. It plans to invest KRW 350bn in the following areas:

In the medium to long term, the company said it plans to expand into international markets through joint ventures.

Capital.com Kakao IPO: should you invest in the Korean online bank?