The Italian elections saw the centre-right coalition win by a robust margin vis-à-vis the other political forces as broadly expected by opinion polling. Giorgia Meloni, the leader of the ultra-conservative Fratelli d'Italia party, will become Italy's first female Prime Minister.

The main economic measure promised by Meloni's Fratelli d'Italia during the electoral campaign is a "flat tax" on incremental incomes, though the most specific details will be obtained only after the Minister of Finance is appointed.

The Italian bond market was not overjoyed with the election outcome, owing to concerns about an increased government deficit in the midst of a ballooning overall public debt (155% of GDP).

The Italian 10-year BTP yield rose to 4.5% at the opening on Monday, the highest level since September 2013. The 10-year yield spread between BTP and German Bund has increased to 237 basis points, not that far off the historical worrying region above 300 basis points.

In the past, rising political and fiscal uncertainties in Italy have seen the BTP-Bund spread widening, the italian stock market (IT 40) falling, and the euro depreciating, especially against the safe haven Swiss franc (EUR/CHF).

Will this time be any different? 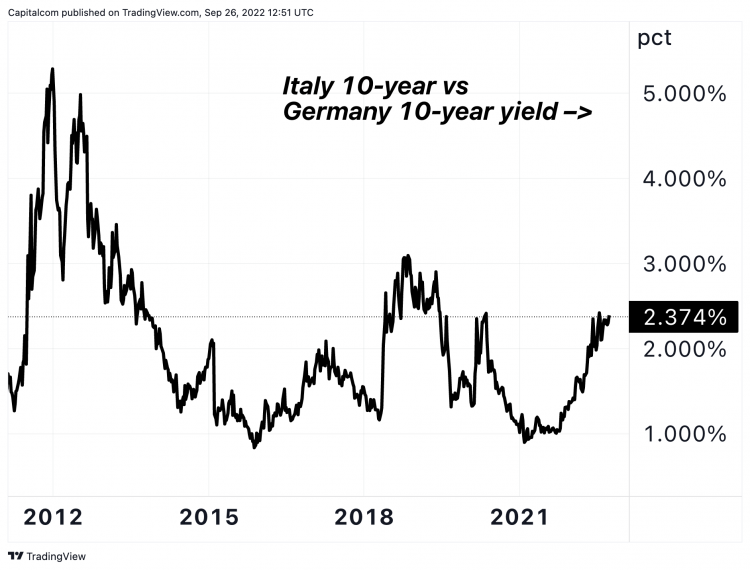 If there is one metric that can more accurately reflect the evolution of Italy's political and fiscal risks, it is the yield differential between BTP and Bund.

In times of rising political and economic uncertainty, the yield on BTPs increases while the yield on Bunds typically falls, resulting in a wider yield spread between the two sovereigns.

It is critical for investors to remember a historical precedent. This is not the 2011 crisis, which was caused by other factors. However, two months after the 2018 Italian elections, the far-right League and the anti-establishment 5 Star Movement joined forces to form a populist and Eurosceptic coalition. Both the Italian equity and bond markets reacted negatively, resulting in a significant widening of the spread.

Today, Italy can rely on a centre-right coalition with a sizable parliamentary majority, but the possibility of implementing massive tax cuts without appropriate provisions carries the risk of a substantial increase in the country's deficit.

If Italian finances are once again scrutinized by the market, and if political relations between Europe and the new far-right Italian government are not ideal, the BTP-Bund spread will likely widen further from here, dragging down both the equity and the currency markets.

What is your sentiment on EUR/CHF?

Give EUR/CHF a try

Is the Swiss franc a good hedge against Italy's fiscal risks? 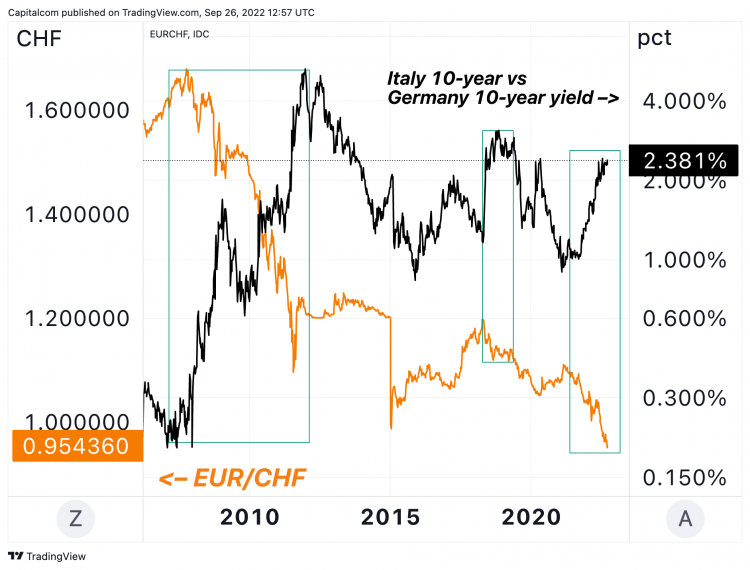 Historically, the EUR/CHF pair provided a valid hedge against periods of rising fiscal and political risks in Italy, as represented by the widening yield spread between BTP and Bund.

A weaker euro against the Swiss franc has coincided with three periods of widening spread between Italy and Germany (a long one between 2007 and 2012, a shorter one in 2018/19, and the current one beginning in 2021).

Increased fiscal unpredictability in Italy, or into the periphery of the European bond market more generally, drives demand away from the euro and into the safe-haven Swiss franc.

In times of uncertainty, investors seek refuge in safe havens, and the currency market may reflect Switzerland's stability.

When the outlook for Italy's public finances and the economy worsen, the appeal of the Swiss franc increases.

In May of 2018, when Italy announced a government led by the League and the 5 Star Movement, raising concerns about a larger public deficit, the Italian stock market fell sharply, and the BTP-Bund spread widened by more than 300 basis points.

At that time, the EUR/CHF pair exhibited a trend that was practically identical to that of the Italian FTSE MIB (IT 40).

If the newly formed Italian government raises concerns about the healthy of public finances in the coming weeks, we could expect a repeat of the 2018 playbook. 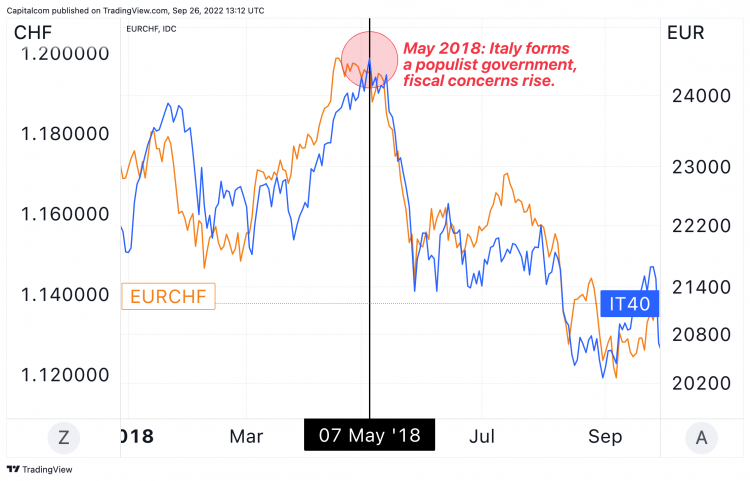 Gold price analysis: Is the precious metal about to enter a bear market?

GBP and the Three Lions: Can England World Cup euphoria boost the pound?