Italian elections: How might they affect the FTSE MIB and the euro?

On September 25, Italy will hold general elections to renew both chambers of the parliament and elect a new prime minister to succeed Mario Draghi.

The most recent polls suggest that a centre-right coalition may be the most likely outcome of the Italian elections. Investors are eager to know how this political shift in Italy will impact the country's economy and financial markets.

In this analysis, we will examine how the Italian election results may affect the Italian stock market index (FTSE MIB 40 – IT40), the euro, and the BTP/Bund spread.

Italian elections: The rules of the game

It is the first election in Italy since the 2019 constitutional reform, which reduced the number of lawmakers in the House of Deputies to 400 from 630 and in the Senate to 200 from 315.

The current electoral law in Italy, known as Rosatellum, is a mixed system in which 37% of the seats are selected by the first-past-the-post method and 61% by proportional representation with a minimum threshold. The remaining 2% of seats are determined by overseas contributions.

After elections, president Sergio Mattarella consults with party leaders before appointing the new prime minister. Next, the PM will present the cabinet nominations to the president.

The new Parliaments will convene on October 13, and if the winning coalition wins an uncontested majority, a new government could likely be in place by then. However, in the 2018 Italian election, the formation of the government took more than two months after the election.

In the Italian political system, a government must always have the support of both chambers of Parliament in order to pass legislation.

What is your sentiment on IT40?

Italians elections: Centre-right coalition leads in the polls and shows a robust majority 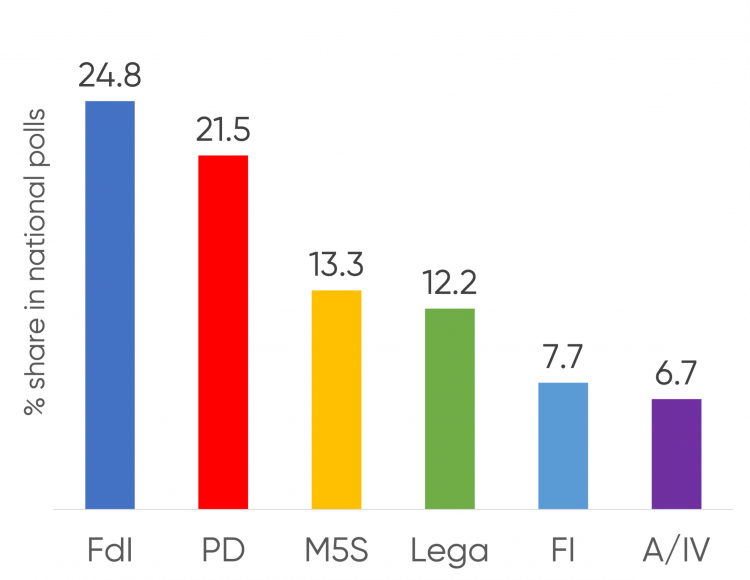 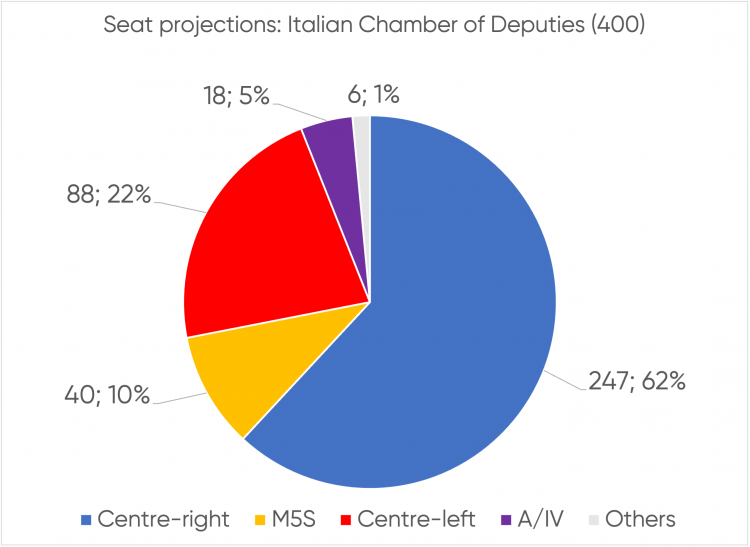 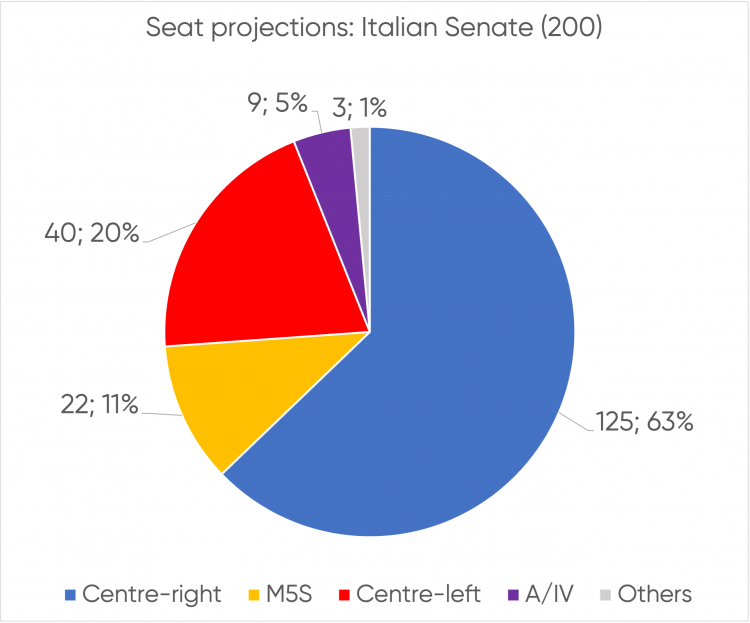 As of mid-September, the most likely outcome of the Italian 2022 elections is a centre-right ruling coalition.

According to "PolitPro AI" which calculates its own election trend based on the most recent election polls conducted by top national opinion researchers, the centre-right parties in Italy show a clear advantage.

The three parties forming the centre-right coalition – Fratelli d'Italia (FdI), Lega, and Forza Italia (FI) – have a combined vote share of 45–46%, which, given the current electoral law, translates to a projected 62-63% of seats in the Parliament.

If this scenario plays out, the centre-right coalition will hold enough lawmakers to secure a robust majority.

Fratelli d'Italia (FdI), a conservative far-right party led by Giorgia Meloni, which was the only opposition party under the Draghi administration, leads the polls with a 24% of the vote.

Partito Democratico (PD), a centre-left party led by Enrico Letta, is in second place with 21.5%.

Next in line is Matteo Salvini's far-right populist party Lega, which has 12.2% of the preferences, while Forza Italia, the liberal party in the center-right, has 7.7%.

The centre-liberal coalition Azione/Italia Viva (A/IV), led by Matteo Renzi and Carlo Calenda, who both support Draghi's return as PM, has 6.7% of the vote. 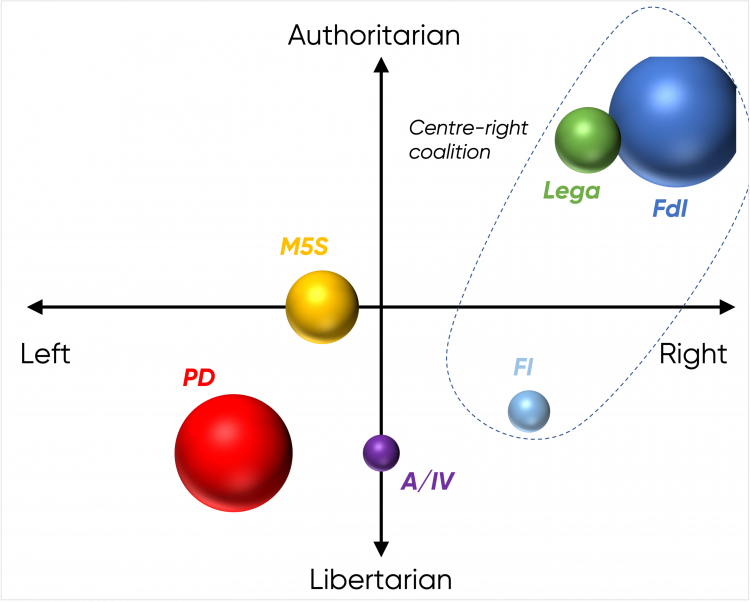 Italian elections: The economic policies of the centre-right coalition

The centre-right government that is expected to secure a solid majority of seats, according to the latest polls, appears to be decisively more shifted towards the more conservative and nationalistic wing rather than a liberal one.

Fratelli d'Italia has its roots in a dissolved party of neo-fascist inspiration, while Lega, the second party of the centre-right coalition, in its earliest days advocated for the independence of Northern Italy and has always held staunchly anti-immigration views.

Both La Lega and Fratelli d'Italia have expressed an anti-euro sentiment in the past, but the Euroscepticist bias is no longer present in their current agendas. Forza Italia, however, the most market-friendly and liberal party in the centre-right coalition, is likely to have a smaller relative weight within the coalition.

In terms of economic measures, the centre-right coalition will be pushing for tax cuts and an income “flat tax”. In addition, they favor raising minimum pensions, subsidizing energy, and increasing defense and military spending.

Measures to finance these lower taxes or higher fiscal expenditures remain very vague. However, with a public debt of more than 150%, and after 2 years of tax breaks due to the pandemic, the room for manoeuvre to adopt extravagant fiscal measures is rather small for Italy.

Brussels is also likely to veto fiscal measures that would significantly increase the government deficit. This issue has the potential to become the most controversial in the relationship between the new Italian government and the European Union, particularly if a centre-right coalition obtains a large majority.

Italian elections: All eyes on the National Recovery and Resilience Plan 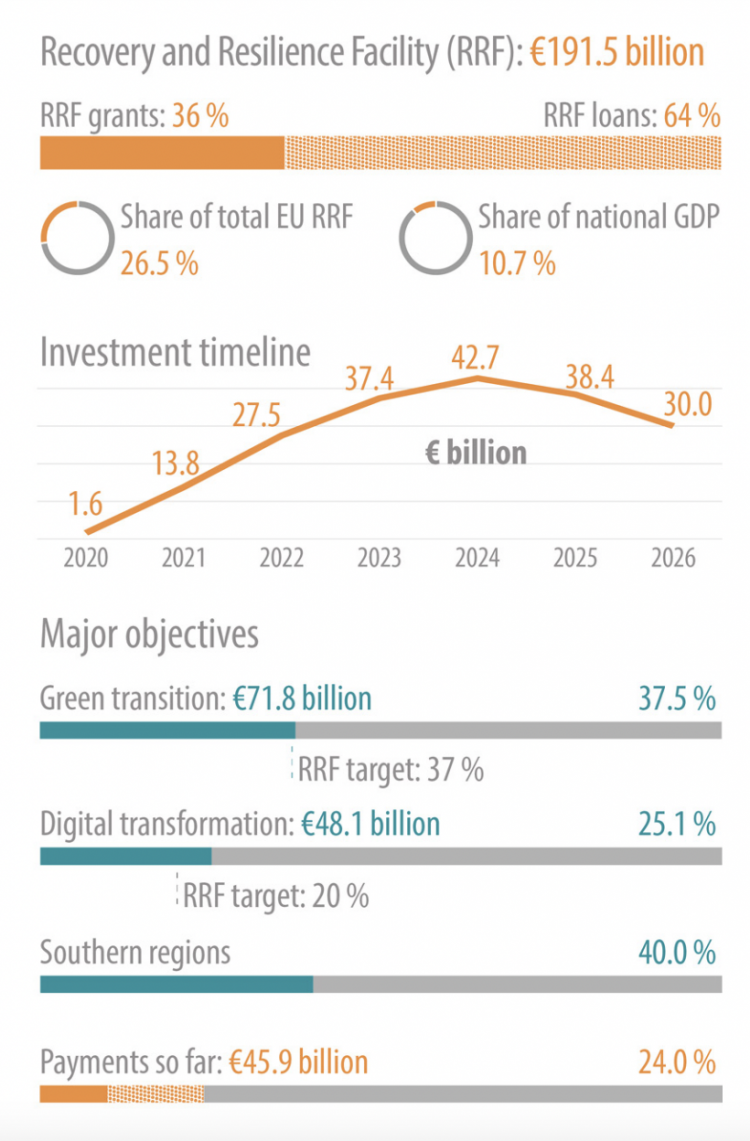 The next Italian government's top priority must be focused on the National Recovery and Resilience Plan (NRRP), which identifies Italy as one of the principal beneficiaries of the broader Next Generation EU (NGEU), with €192 billion in funding (26.5% of the total program).

Italy has received €45.9 billion so far, with the remaining resources (€145.6 billion) contingent on progress in implementing the Italian plan, according to the European Parliament latest data.

The Recovery Fund's next tranches are dependent on meeting a number of milestones (qualitative goals such as pro-growth reforms) and targets (quantitative goals). To fully implement its NRRP, Italy will need to meet 213 milestones and 314 targets.

The risk of losing access to these vital financial resources for long-term economic development in order to implement short-term populist fiscal measures is too high for the next Italian government to take. 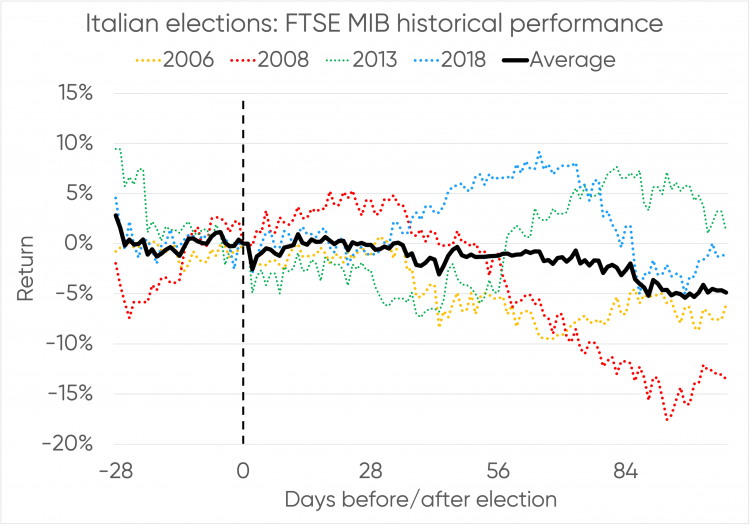 According to our analysis of the four most recent elections in Italy, the stock index of the 40 most capitalized Italian companies – FTSE MIB index (IT40) – has, on average, declined after the election date.

It is important to remember that in the previous elections of 2018 (blue dotted line), the FTSE MIB index did not begin its rapid decline until about 60 days after the election date, when the yellow-green Eurosceptic coalition (Lega and M5S) decided to form a government, causing investors to become very risk-averse on italian assets.

Additionally, we must also emphasize that the FTSE MIB's negative average return following Italian elections is heavily influenced by the 2008 year, which saw global stock markets, not just Italy's, sell off in a coordinated manner due to the subprime mortgage crisis in the US.

As of mid-September 2022, the FTSE MIB has dropped 15.5% since the start of the year. The performance of the Italian FTSE MIB has tracked in footsteps that of the European stock index (EUROSTOXX 50 – EU50) which is down 16% year-to-date.

Other factors, such as inflation, interest rates, the energy crisis and recession risks, have dominated the stock-market performance this year, but investors have yet to price in any country-specific risks associated with the Italian elections.

Italian elections: Could the BTP-Bund spread widen again this time? 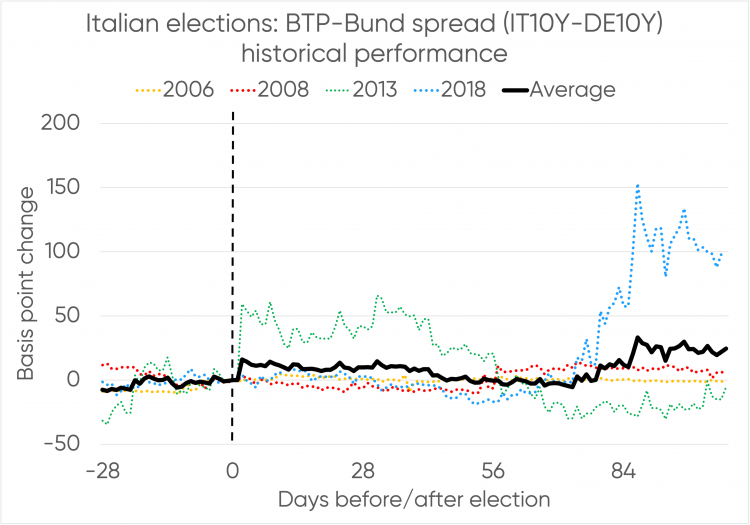 The yield differential, or spread, between Italian bonds (BTPs) and German Bunds is the primary channel by which financial risks spread in the Italian economy.

Following previous Italian election episodes, the 10-year yield spread between Italian BTPs and German Bund has widened on average, indicating that the market has become somewhat more concerned about the future of Italian public finances.

Today, it seems much less likely that we will see the 2018 episode again. However, if the winning coalition indicates its intention to pursue unorthodox fiscal policies aimed at widening the deficit, the BTP-Bund spread may widen.

Italian elections: How could the euro react? 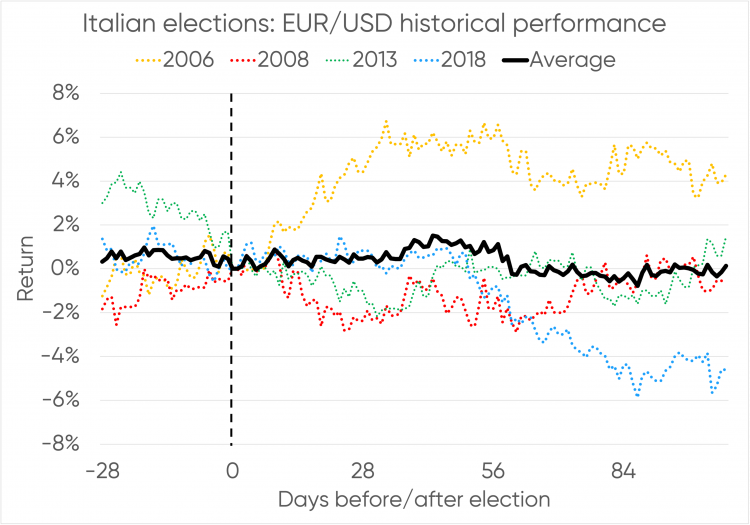 In the past Italian elections episodes, the euro (EUR/USD) had a relatively flat post-election performance, indicating that the event had little impact on the forex pair.

This logic makes sense. So far this year, the performance of the euro has been totally dominated by more pressing factors than the Italian elections, such as the monetary policy and the energy crisis in Europe, which have pushed the single currency below the parity levels against the dollar.

However, it cannot be ruled out that a deterioration in relations between the Italian government and Europe would have an impact on the single currency at a later stage.