News and Analysis News Commodities Is the copper bear market rally already over?

Is the copper bear market rally already over?

By Indrabati Lahiri and Piero Cingari

Five months ago, in early March 2022, copper was trading at about $5.03 per pound. However, this high did not last long, with the base metal having crashed about 37% by mid-July this year, following which it was only able to recover about 16% by mid-August.

In recent times, the industrial metal is struggling to cross key resistance areas, represented by the 50-day moving average. This is largely due to the resurging worries about global economic slowdown as well as concerns about the US Federal Reserve’s continuing aggressive monetary policy tightening.

What is causing the copper bear market rally to slow down now?

China has recently announced disappointing industrial output data for July, which has led to renewed fears of economic recovery in the world’s top copper consumer taking longer than expected. China currently consumes about 52% of global refined copper, while producing about 41%. This has led to headwinds for copper.

The New York Empire State Manufacturing Index also plummeted to -31.3 this month, from 11.2 last month, dropping to an over 2-year low. This highlighted the fact that not only China, but also the world’s strongest economy was seeing a slowdown in manufacturing, mainly due to falling shipments and new orders. This also contributed to a slowdown in copper prices.

UK inflation has recently touched 10.1% in July, which was a new 40-year high, up from 9.4% in June, whereas US inflation stands at 8.5% in July, having decreased somewhat from June’s reading of 9.1%. This has led to both the Bank of England and the US Federal Reserve to highlight that their aggressive monetary policy tightening is far from over, even as the BoE expects the UK economy to be in recession by December 2022. The minutes from the FOMC’s July meeting are also in line with this.

This has taken a significant toll on copper prices, which are also seen as a fore warner of recession. The second quarter of 2022 marked the worst quarter for metals on the London Metals Exchange (LME), since 2008, due to fears of a global recession, with copper being one of the worst hit, along with tin and aluminium.

However, rising natural gas and energy prices, which are expected to keep rising for the next few months could potentially provide a floor on copper prices. This is due to several smelters already having closed down because of higher input costs, causing a crunch in copper production lately.

China has also unexpectedly cut interest rates, in an effort to help bolster the economy, which is still struggling from the impact of rising coronavirus cases, which could go a long way in helping support copper prices somewhat.

According to Piero Cingari, analyst at Capital.com, “A bear market rally that is nearing exhaustion can be seen on the copper daily chart. The price action this week has been unable to break above both the bearish channel and the 50-dma, the RSI has tilted to the downside and the MACD is getting closer to a bearish crossover.

A similar pattern occurred earlier this year, in the first week of June. After a 14% rebound from May’s lows, copper briefly surpassed the 50-day moving average before beginning a severe, steep decline that lasted until mid-July. The RSI and MACD indicators showed similar patterns to what we are seeing now.

Bottom line, copper’s short-term pullback to the bearish channel’s midline in the $3.2-3.3. area seems more likely, given the current technical setup. Breaking decisively the 50-dma and bearish channel resistances would invalidate the thesis and raise the odds of a $4.00 per pound test” 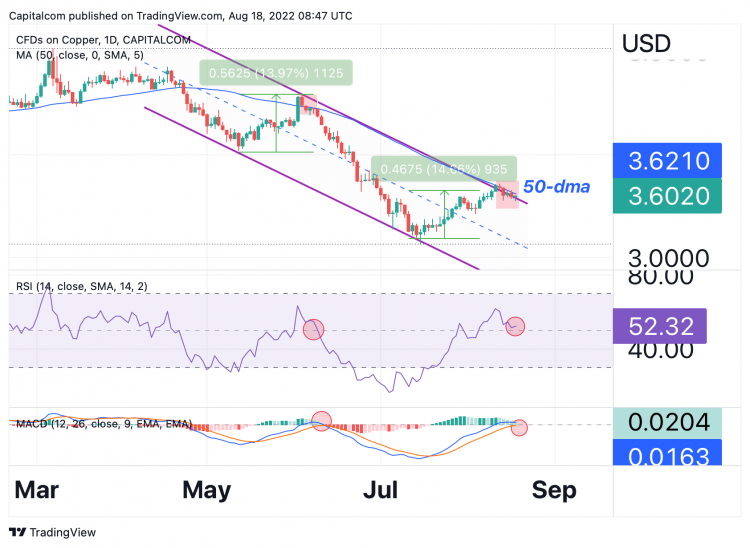 What is the outlook for copper for the rest of the year?

UBS (UBSG) has recently slashed China growth forecasts from 4.2% to 3%, citing the effects of Omicron as well as China’s Zero Covid policy on the country’s manufacturing and industrial activity. While the Chinese economy is expected to do better in the third and fourth quarters this year, the recovery is still likely to be quite slow, which is very likely to still keep copper prices fairly subdued.

J.P Morgan (JPM) has followed suit, by slashing its full-year China forecasts from 4.3% to 3.7%, expecting China to continue implementing strict restrictions for the foreseeable future due to the high contagiousness of the Omicron variant of COVID-19. The International Monetary Fund has also slashed China’s growth forecasts from 4.8% to 4.4%.

With China being the largest consumer of copper, this bleak outlook is likely to significantly affect copper prices for the next few months, making it even more difficult for the base metal to cross the key resistance area demonstrated by its 50-day moving average.

However, these losses in copper prices could be somewhat offset by several copper miners slashing full-year copper production guidance lately, due to a number of factors such as droughts, protests and rising gas prices.

Chinese copper miner MMG (1208), owner of one of the largest copper mines in the world, Chilean mine Las Bambas, has recently slashed its annual production guidance from about 400,000 tonnes to 240,000 tons. This was following output dropping about 30% in the first half of the year, due to the mine having been shut for about 50 days on account of ongoing protests.

Southern Copper (SCCO) has also cut its production guidance at its Peruvian Cuajone mine by about 2.8% to 895,800 tonnes, following long-standing protests. Antofagasta (ANTO) also recently lowered its copper output guidance from about 660,000 to 690,000 to about 640,000 to 660,000 for the year. Vale (VALE) and BHP (BHP) have also followed suit with similar guidance.

According to Fitch Solutions, copper could potentially trade at about $9,470 per tonne by the end of the year, whereas Citi (C) believes that it could possibly touch about $10,750 per tonne by 2030. However World Bank has a more pessimistic outlook, with prices expected to rise to about $10,100 per tonne in 2022, but decline for the next few years after that.

Copper prices will also depend heavily on whether we see a global economic recession in the next few months or not.

Copper price forecast: Is the metal a buy on macro uncertainty?

Oil price battle: US fury after OPEC+ cuts - here’s why it matters

Capital.com Is the copper bear market rally already over?