News and Analysis News Commodities Is silver a buy after a technical golden cross?

Is silver a buy after a technical golden cross?

Silver experienced a technical “golden cross” this week, which happens when the 50-day moving average (MA) crosses above the 200-day MA, reflecting a recent positive momentum. The last time a golden cross appeared on the daily chart of silver was in early July 2020, and the commodity increased by 60% the following month.

Silver prices began an upward trend starting in early February, extending to around $27 per troy ounce on 8 March, and then falling due to the rise in US real yield supported by the Federal Reserve’s hawkish stance on interest rates.

On a fundamental standpoint, silver prices tend to lag behind gold prices, as Goldman Sachs recently argued, and there may be still untapped investor demand to hedge geopolitical risks and inflation in the coming months. In the long term, the switch to green technologies, such as photovoltaic cells for solar panels, and its widespread usage in electronics, might raise silver demand even more, but reserves discoveries may also keep the supply well supported.

However, as we've seen in recent weeks, rising real interest rates in the United States act as a brake on the rise of precious metals like gold and silver. In this case, only a further rise in inflation expectations or a drop in long-term Treasury yields may prove to be supportive for the precious metal.

From a technical point of view, prices have continued to trade in a fairly tight range between $24.5 and $25.5 per troy ounce over the past week. This has allowed silver prices to remain above 50% of the Fibonacci retracement level, avoiding reversing the current trend. 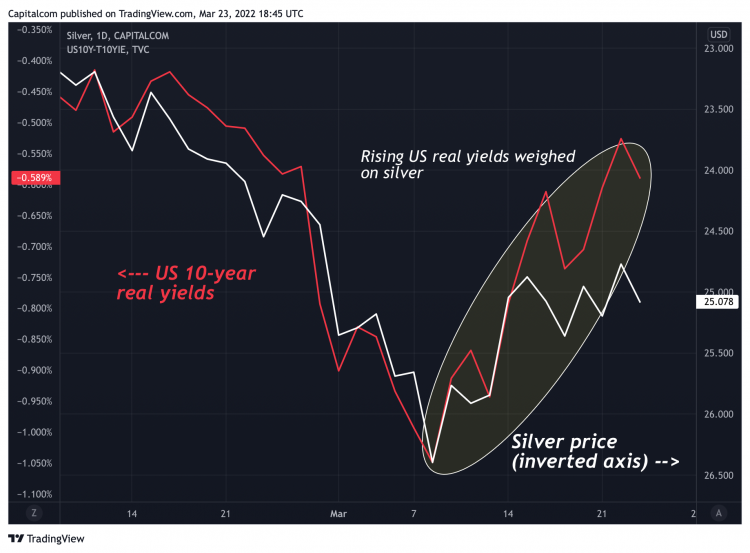 Silver prices have risen by 9% since the start of 2022, broadly matching gold’s performance, driven mainly by rising market inflation expectations and higher geopolitical risks following the Russia’s invasion in Ukraine.

The US five-year breakeven rate, a gauge of how much the market anticipates inflation to run on average over the next five years, has hit its highest level ever, reaching 3.5% from 2.8% at the beginning of the year, conveying greater investor demand for precious metals.

However, the Fed's recent pledges of quicker and more aggressive interest rate rises have pushed up real yields in the US, which have traditionally been a drag on the precious metals rally.

Precious metals are assets that do not offer fixed returns, and therefore when real interest rates rise investors are more tempted to move elsewhere.

Where is silver headed to? 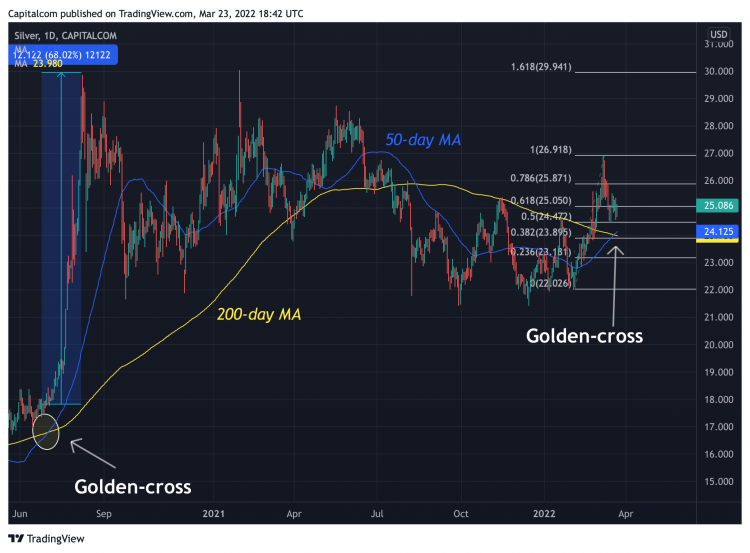 On the technical analysis front, the most relevant signal is the formation of the golden cross on the daily silver chart, as the 50-day moving average (MA) has exceeded the 200 MA. The last golden cross on silver occurred in early July 2020 and the metal grew by more than 60% in the following month.

The Fibonacci analysis, taking the highs and lows of 2022, shows that prices have pulled back to the 50% retracement level, and are currently trading close to the 61.8% level.

Support at 24.5 proved to be solid enough to prevent prices from reversing the ongoing bullish trend.

What does the election of Chile’s left-wing president mean for copper?

Capital.com Is silver a buy after a technical golden cross?