India’s economy grew by double digits in the first quarter of the current fiscal year. While the growth was lower than analysts’ expectations, it shows the country’s economy has remained resilient amid recessions that have loomed in on other developed nations and regions, such as the US and the eurozone.

However, the inflation rate, partly brought about by higher commodity and energy prices, has remained high. Will the elevated inflation increase risks of recession in India?

In this article, we discuss India’s recession history and recent economic indicators that may give a hint on India's recession forecast.

Although there isn't a clear definition of what a recession is, it is generally defined as a time when economic activity is down. Most analysts agree that a recession occurs when a nation's gross domestic product (GDP) declines markedly for two consecutive quarters.

According to the International Monetary Fund (IMF), recessions have several common characteristics:

Since its independence from Britain in August 1947, India can be said to have successfully developed its economy. Within more than four decades, the country’s GDP growth accelerated from just 1.25% after independence to 8.7% from April 2020 to March 2021.

Like other economies, India is no stranger to recessions — economic crises in India have occurred in the past.
Indian economic slowdown marked with a negative annual GDP growth rate has happened several times since the country became independent in 1947. According to World Bank data, there have been three instances when India’s economy registered a contraction of more than 2% since 1961.

The most recent Indian recession happened in 2020, when the country’s economy contracted for two consecutive quarters as Covid-19 restrictions took a heavy toll on the economy. India’s GDP plunged to an unprecedented -23.9% in the first quarter of 2020/2021, which eased to -8.6% in the following quarter, according to the Reserve Bank of India (RBI).

An RBI recession forecast implied that the Indian economy was likely to have entered a technical recession in the first half of 2020-21 for the first time in its history.

In recent India recession news, in the first quarter of the 2022/2023 fiscal year, the Indian economy grew at 13.5% from April to June, according to a preliminary estimate from the National Statistics Office (NSO) on 31 August. While it still posted double-digit growth, it slowed from 20.1% in the same period in 2021/2022.

Q1 2022 GDP growth was below analysts’ expectations of 14.5%, expressed in the Reserve Bank of India’s Survey of Professional Forecasters (SPF), released in August.

Despite its GDP rate slowing, the Indian economy has registered much higher growth compared to other developed nations amid the global economic downturn. For instance, the UK’s economy was estimated to have contracted by 0.1% in Q2 (April-June), while US real GDP growth declined at an annual rate of 0.6% in the same period as hawkish interest rate hikes began to take hold.

The inflation rate in India has remained above the RBI’s target of between 2% and 6% — mainly on the back of rising food and fuel prices. Reopening economies around the world have boosted demand for energy and commodities — from oil to natural gas to wheat and vegetable oils — boosting their prices.

The country’s inflation readings shown by the Consumer Price Index (CPI) rose at an annual rate of 7% in August, ending three months of downtrend. After peaking at 7.8% in April, the inflation rate in India had eased to 7.04% in May, 7,01% in June and 6.71% in July, according to the NSO.

Participants in the RBI’s Survey of Professional Forecasters in July expected inflation to average 7.1% in the second quarter of 2022/2023, easing to 5% in the first quarter of 2023/2024.

ABN-Amro’s recent economic forecast revised India’s inflation projections to 7% for 2022 — up from a previous estimate of 6.5%. It expected the country’s inflation rate to cool to 5.5% in 2023.

As India has the second-largest population in the world, food inflation is one of the most significant economic indicators for the government and the central bank. The majority of Indians' standard of living may be threatened by rising food prices, making them crucial to monitor.

The US Department of Agriculture (USDA) estimates that 50% of typical household spending goes toward food. High food inflation could threaten the living standards in a country where 10% of the 1.39bn population live in poverty, according to data from the World Bank.

Fitch Ratings said in its global economic outlook in September:

The Indian rupee (INR) has fallen 7% year-to-date against the US dollar (USD) as the US Federal Reserve’s (Fed) hawkish policy rate has strengthened the greenback, hurting Asian and other global currencies. 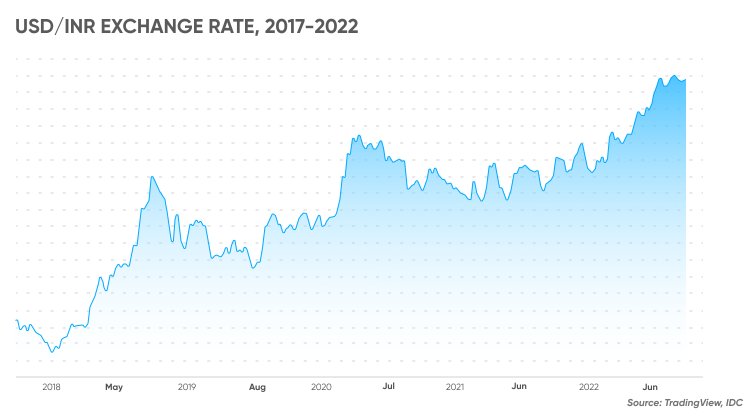 The Federal Reserve (Fed) has had four rate hikes this year — the benchmark federal funds rate is currently in the 2.25%-2.50% range. Analysts expect the Fed to maintain its aggressive rate hike pace of 75bps after data showed August consumer price inflation in the US remained elevated at 8.3%.

On the other hand, the RBI has front-loaded its policy rate by a total 140 basis points (bps) to 5.4% and is expected to hike the rate by 25bps in a meeting at the end of September, according to ING.

Other market participants have changed their stance, and now expect a higher interest rate hike in line with other central banks in developed countries.

"We were earlier expecting a 35 bps increase, however, sticky inflation and continued hawkish stance of DM (developed market) central banks warrant continued front-loading of rate hikes in our view.

Indian government bond yields are expected to increase following comments from the RBI that the frontloading of rate hikes can keep inflation expectations anchored.

“At this critical juncture, monetary policy has to perform the role of nominal anchor for the economy as it charts a new growth trajectory,” the the RBI said in a recent article on the state of the economy, included in the central bank’s monthly bulletin.

If the RBI slows its rate hikes while the Fed keeps its aggressive stance, the USD/INR could rise further due to the policy divergence between the two central banks.

Indian economic outlook for 2022 and beyond

As the country’s GDP remains strong despite elevated inflation and rising risks from increased food prices, what will be the Indian economic outlook for this year and in the medium term? Will an economic recession in India happen again this year?

Deloitte’s India economic outlook in July expected that risks from global economic slowdown, including recession in developed nations, was not enough to tamper India’s economic growth. It expected India’s economy to grow by 7.1% to 7.6% in 2022/2023 and 6% to 6.7% in 2023/2024.

Resilient domestic demand and appetite for global business to look for cost-effective investment and export destinations will help the country ride the headwinds from inflation, supply chain disruptions and global business uncertainties, according to the consulting firm.

“This will ensure that India reigns as the world’s fastest-growing economy over the next few years, driving world growth even as several major economies brace themselves for a slowdown or possibly a recession.”

On 15 September, Fitch Ratings cut its forecast on India’s economic growth but the growth rate remained high. The firm lowered its India’s GDP estimate to 7% in the current financial year ending March 2023, from the previous forecast of 7.8% amid the global economic slump, inflation and tighter. It also slashed its forecast for India’s GDP in FY2024 to 6.7% from 7.4%.

Bank of America (BofA) also expected India’s economy to maintain its robust growth amid the global economic slowdown. It forecast the country’s economy to grow by 7% in FY 2023 as the service sector recovered and 6.5% in FY 2024 on government spending and revival of private investment.

BofA wrote in a note on 16 September:

“In this global backdrop, we see India's growth holding fort. India is poised to be one of the fastest growing large economies in a relatively uncertain world.”

Analysts mentioned in this article did not forecast Indian economic recession despite the country’s economic growth may slow in the near term.

You should always keep in mind that analysts’ predictions can bewrong. You should always do your own research before trading. Performance in the past does not ensure success in the future. Furthermore, never trade with funds that you cannot afford to lose.

India interest rate rise: When will the Reserve Bank of India hike rates again this year?