What is the Hull Moving Average and how does it work? Read on to learn more.

What is the Hull Moving Average (HMA)?

Moving averages are popular analytical tools that track the direction of an asset price by moving to the most recent trading session and discarding the oldest over a period of time. For example, a 21-day moving average incorporates data from the past 21 days and drops data from day 22 and later.

So, what is the Hull Moving Average (HMA)? It is a way of calculating the moving average for an asset price that aims to reduce lag to make it more responsive to the current price, while smoothing out the curve on a chart. 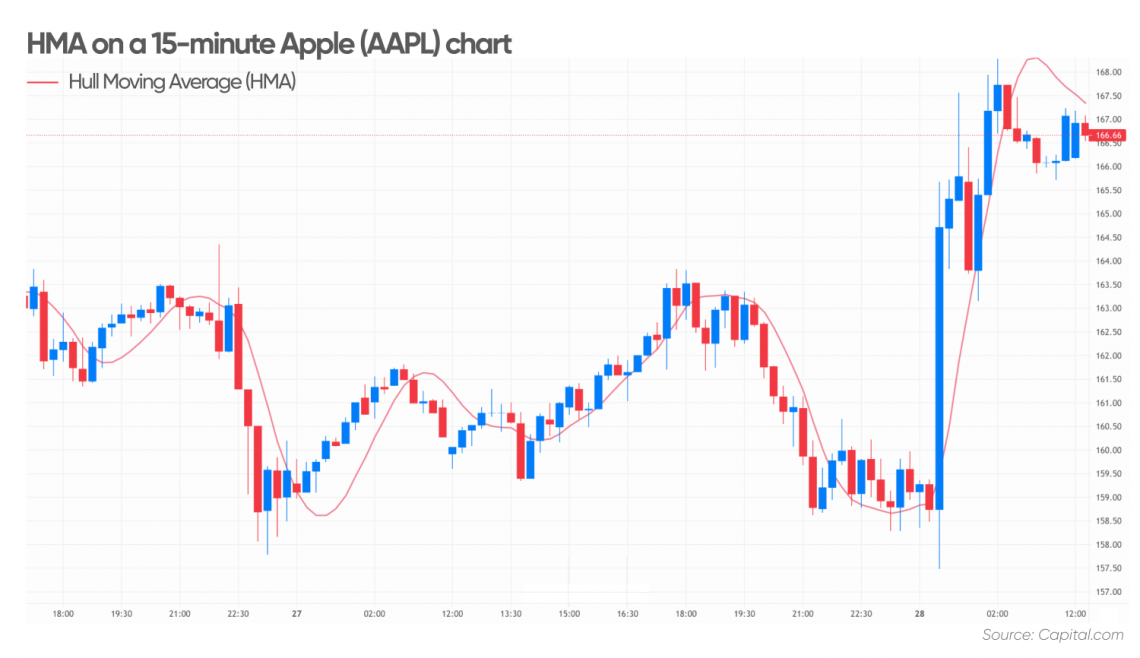 The Hull moving average formula is complex, as follows:

The Hull Moving Average calculation uses two Weighted Moving Averages (WMAs) and adds a third to reduce lag. It reduces the lag by using the square root of the period being analysed rather than the actual period.

Using Weighted Moving Averages gives more importance to recent prices, for a fast-moving indicator that can identify prevailing market trends. Offsetting one weighted moving average with another for the most recent half of the time frame gives even more weight to recent prices, further reducing the lag. You can adjust the period for the calculation to analyse different time frames in line with your trading strategy.

Who invented the Hull Moving Average?

A relatively recent addition to technical analysis, the Hull Moving Average indicator was invented in 2005 by Australian stock market and IT expert Alan Hull when he was working on developing a new indicator. He was distracted by the problem of lag seen in the other types of moving averages and developed the HMA to address the issue.

In late 2017, Hull was a fund manager and moved all his holdings to cash ahead of the 2008 financial crisis. He did not re-invest in the stock market until mid- 2009, preserving capital for his clients.

Why is the Hull Moving Average useful for traders?

The HMA can be interpreted in a similar way to traditional moving averages, but as it responds more quickly it could be a useful technical analysis tool especially for day traders. Like other moving averages, traders could use it to confirm a price trend or spot a change in the trend. By providing buy and sell signals faster than the other averages, the HMA gives traders the opportunity to make larger profits by moving earlier to take or change a position.

Long-term traders could use the HMA to find an asset price with a clear upward or downward price trend to open a long or short position.

How to interpret the Hull Moving Average

A Hull moving average (HMA) trading strategy takes advantage of the superior smoothing of the line on a price chart compared with other moving averages.

How do you interpret the HMA to help make trading decisions? On a technical analysis chart, when the short-term price trend is moving higher and the HMA turns higher, it signals a trader to open a long position on an asset. As the asset price rises, the HMA should remain below the price. If the price drops below the HMA, it suggests a sell signal. 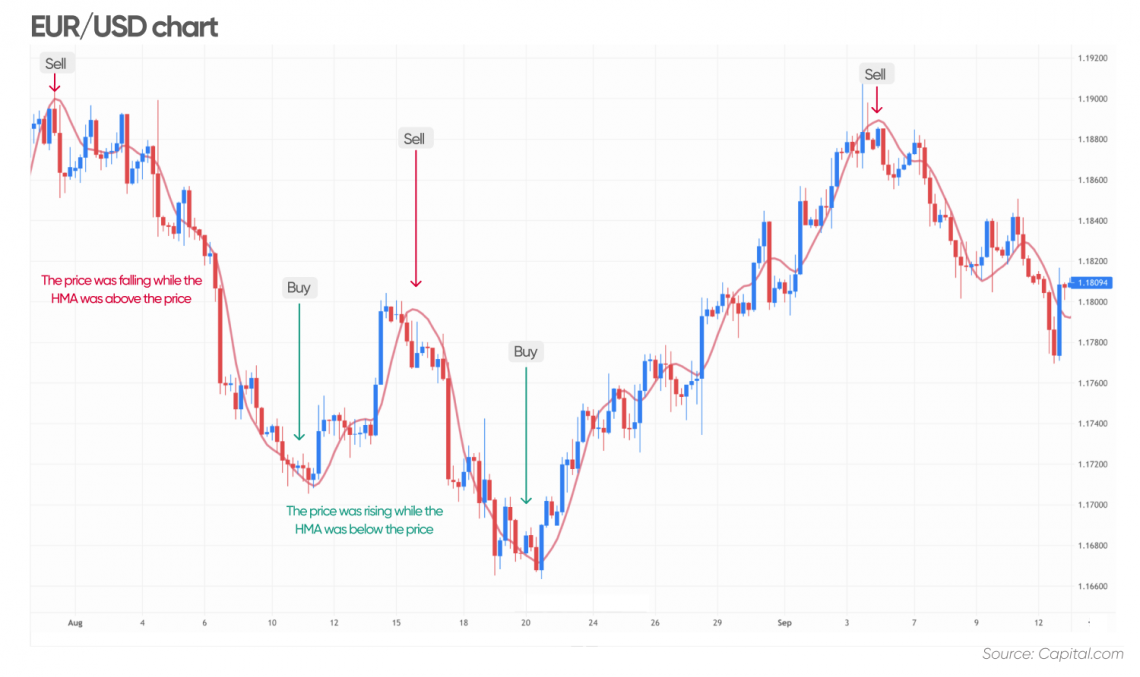 Conversely, when the short-term price trend is falling and the HMA turns lower, it signals a trader to take a short position. And as the price moves lower, the HMA should remain above the price. Once it moves below, it suggests the trader to close out the short position.

The HMA is an effective reversal filter, so its exit signals for a position could be more reliable than its entry signals.

How to trade using the Hull Moving Average

As the HMA reduces the lag seen in other moving averages, short-term traders can use a Hull Moving Average strategy to look for turning points to identify entry and exit prices for trading positions. Traders can also use the HMA to monitor long-term prevailing price trends.

You can use the HMA to analyse prices for different assets, such as stocks, exchange-traded funds (ETFs), foreign exchange (forex) rates and cryptocurrencies.

As with all technical analysis indicators, the HMA is not sufficient to be used on its own to make trading decisions. One should use the HMA in combinations with other indicators and techniques for price analysis.

Traders should also be aware that moving averages like the HMA can overshoot current asset prices, so they need to take this into account and use it with other indicators.

And while the HMA can provide effective entry and exit signals for trading positions, it is relatively complex, which leaves room for errors to be introduced into the calculation.