News and Analysis News Commodities How did gold perform during the Fed rate-hike cycles?

Following weeks of decline due to optimism around negotiations between Russia and Ukraine, gold reacted positively to the most recent major central bank announcements, which indicated tighter policies as well as increased risks to the economic forecast.

The Federal Reserve (Fed) formally began a new rate hike cycle on March 16, 2022, lifting interest rates by 0.25 percent for the first time since November 2018 and pledging six more hikes (one at each meeting) by the end of the year due to continued inflationary pressures.

The next day, the Bank of England raised the Bank Rate from 0.5% to 0.75%, its third straight increase since December. A week earlier, also the ECB also moved in actions, by quickening the pace of tapering, and in words, by promising a more data-dependent approach while not ruling out a rate hike this year.

The biggest central banks have marked a watershed moment, recognising that the ultra-expansionary monetary policies that defined the post-Great Financial Crisis decade are no longer appropriate at this new macroeconomic juncture.

What effect might this historical shift in monetary policy have on gold's performance? How did the precious metal do during prior Fed’s hiking cycles?

Are interest rates on the verge of reversing their secular decline? 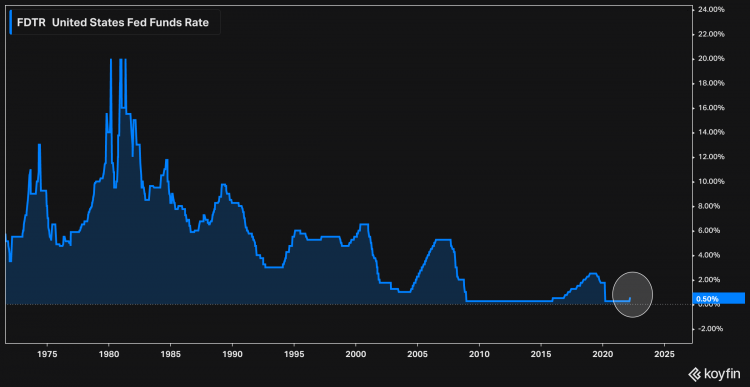 performance of US dollar and gold during Fed rate-hike cycles since 1970 – Credit: Capital.com / Data: Tradingview

Gold performed well when the Federal Reserve hiked interest rates, with an average performance of 25.8% over the hiking cycle, but with a relatively high standard deviation of 53%. However, these figures are substantially influenced by gold's astonishing performance throughout the rate hike cycles of the 1970s.

When the analysis is limited to post-1980 rate rise cycles, the average gold performance falls to 6.5%, and the standard deviation drops to 27%.

On average, a rate-hike cycle of the Federal reserve lasts 16 months and deliver a 4.6% average percentage point increase in interest rates. Since 1983, hiking cycles have been longer, but interest rate rises have been less pronounced (2.7 percentange points increase on average).

There is a substantial negative correlation between gold and dollar performance during Fed hike cycles. Except for two cycles between March 1974 and June 1974 and July 1999 and June 2000, gold did better when the dollar fell and vice-versa.

Can the US dollar hold its haven role if Treasuries sell off?

Capital.com How did gold perform during the Fed rate-hike cycles?