Start Trading Try demo
Identify some of the biggest trading biases and learn how to avoid them with Capital.com

What is herd mentality bias?

Herd mentality bias occurs when people rationalise a course of action based on the fact that several other people are doing the same. In trading psychology, this can take the form of panic buying (or selling) after witnessing an increasing number of people doing the same. Herding could be a reaction to asset bubbles.

Herd bias comes from the idea that following the crowd will lead to desired outcomes and is based on the rationale that knowledge of the many outweighs the few. But it is more ingrained than that; no one consciously decides to follow the herd, it is simply hardwired into us.

In behavioural finance, herd mentality bias refers to cases where investors copy the behaviour of other investors, led by their emotions and instinct, rather than by independent analysis. 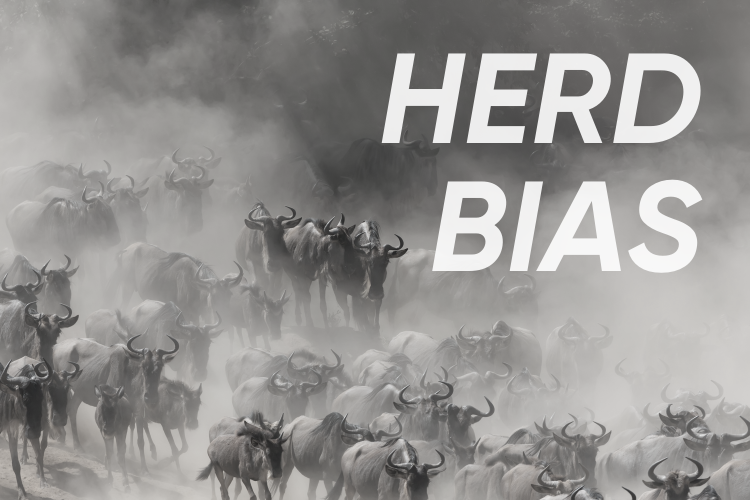 Herd bias in trading and investing

Crowd psychology is a type of collective behaviour that has been observed since 1841 in Charles Mackay’s Extraordinary Popular Delusions and the Madness of Crowds. Mackay describes economic bubbles as an example of the ‘madness of crowds’. It was one of the first written accounts that links economic bubbles to herding.

In his book, Mackay references the Dutch tulip mania of the early 17th century. During the Dutch Golden Age, the contract prices for tulips reached extraordinarily high levels, only to dramatically collapse in February 1637. This is considered the first recorded speculative bubble.

A more recent example would be the dotcom bubble of the late 1990s and early 2000s. During the dotcom bubble, people frantically started investing in US internet-related technology companies, irrespective of these companies’ fundamentals. As a result, the prices of tech stocks spiked dramatically and then later crashed.

So is herd mentality always a bad thing?

Herding can be a case of collective irrationality, but that does not necessarily mean that traders cannot use it. If a trader thinks they are able to identify when a market is in a speculative bubble due to herding, then they can use this in their decision-making process. During the 2021 GameStop bubble some traders recognised that herding was contributing to the rise in the GameStop share prices, and used this knowledge to trade the bull run, whilst being aware that it was a bubble.

Occasionally, something that may seem like classic herding could simply be a case of sound investing. The fundamental analysis of a stock could be at odds with the stock price. Consequently, it could become oversold and you will witness many traders purchase the stock and the price will start to rise again, which could easily be mistaken for herding.

Sometimes, what may seem like herd mentality, with countless traders rushing to an opportunity and driving up the price, may just be an example of market sentiment. Market sentiment is the general tone of investors towards a particular security. Herd mentality is often conflated with market sentiment at times. But to separate the two, one is a general tone of the market, whereas the other is an instance of countless people rushing into a market purely because others are.

How to avoid herd bias

Biases are psychologically hardwired into us, so they might be difficult to avoid. However, there  are five strategies to consider when trying to become a better trader.

When you are ready to make a trade, it is crucial that you stop and take the time to consider your goals. Consider whether the underlying asset has inherent value that matches the quantity of orders. Once you are aware of herding you can look at securities with a genuine level of scrutiny.

However, if you base your decisions on your own opinions, you apply a level of scrutiny to your decision making that should hopefully avoid herding altogether. Ask yourself– Why are you making this decision? Being aware will naturally lead to better-informed decisions.

When you’re making decisions in time-critical environments, such as trying to catch the start of a trend in the markets, you can be more likely to copy herd behaviour if everyone seems to be piling into a market. Just because everyone else appears to act fast, does not mean that it is the best strategy. Take time to assess whether buying into a market suits your strategy. Even if this risks being behind the curve, it is all part of the discipline and will stop you from buying into fads.

Due to the effects of stress on the brain, people are more likely to give in to herding pressures when they’re in a stressful situation. It is a way of decision making that attempts to alleviate any further stress. The markets can be extremely stressful, so try to avoid letting that cloud your decision making.

You could be more likely to justify an investment decision if others are doing it. Similarly, a decision can seem initially unappealing if you’re the only person supporting it. It’s the obvious thought “if I’m the only one thinking it, I must be wrong”. Following your own path as a trader means being confident in your trading strategy.