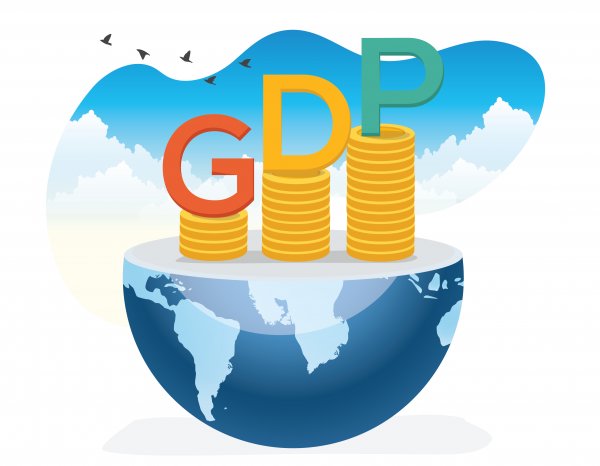 What is gross domestic product (GDP)?

Have you ever found yourself wondering “what does GDP mean?” The gross domestic product definition is as follows: Gross domestic product (GDP) is a  broad monetary measure of a nation’s overall economic activity, valuing all the final goods and services produced in a particular period of time, typically annually or quarterly, within the country’s boundaries. The gross domestic product (GDP) is one of the key indicators used to gauge the overall performance of a country’s economy. It includes all public and private consumption, the foreign balance of trade, investments, government outlays, additions to private inventories and paid-in construction costs. Within each country, GDP is usually measured by a national governmental agency. GDP is considered to be one of the principal indicators in economics, allowing analysts to build a better picture of a nation’s financial situation. When the economy is doing well, wages increase and a lower unemployment rate is indicated as businesses demand more labour to meet the growing economic needs. Rising GDP signifies that incomes within the country are increasing respectively as well as consumers purchasing power, and vice-versa. A significant change in GDP, whether negative or positive, usually reflects in the stock market.

Gross domestic product, which represents economic production and growth, has a large impact on nearly everyone within that economic environment. It can affect everything from personal finances to investments to job growth. Understanding the GDP of a given nation may be very helpful for investors when taking any investment decisions in a particular region. It is also vital when comparing country’s growth rates to find the best international opportunities. For example, you may choose to buy shares in companies that are located in a rapidly growing economy in the hope of higher returns.

Where have you heard about gross domestic product?

If someone is talking about the size of an economy, they are most likely referring to gross domestic product. You will usually hear news reporters, economists and politicians often use the GDP growth rate to compare the relative performance of different countries.

What you need to know about gross domestic product.

Now that you know what gross domestic product definition is and what GDP stands for, we can look further into the details.

The basic concept of GDP is rather old. It was created between 1654 and 1676 by William Petty, an English economist, scientist and philosopher. He came up with the idea to calculate an estimate of the total: income and expenditure, population, land and other assets of Wales and England, in order to fight landlords against unfair taxation during the Anglo-Dutch wars. Later, in 1695, the method was further developed by Charles Davenant, an English politician, mercantilist and economist. In 1934, the modern concept of GDP was introduced by Simon Kuznets in a US Congress report. In 1944, after the Bretton Woods conference, GDP was finally widely adopted as the main tool for measuring national economies.

In the past few decades, governments across the world have added various modifications to increase GDP specificity and accuracy. The means of calculation have also evolved to keep up with changing measurements of industry activity and the consumption of emerging intangible assets.

As there are, in fact, a few ways to measure a country's gross domestic product, it is important to know what types of GDP there are. Economists typically use two types of GDP for measurements: nominal and real.

Nominal GDP is a country's economic output, the value of the final goods and services produced in a given year without an adjustment for the price level.

Taking into account that GDP is based on the monetary value of services and goods produced, it is subject to inflation. The price level has a large impact on the nominal GDP value. Rising prices usually cause an increase in nominal GDP, while falling prices typically tend to make the nominal GDP value smaller. However, it doesn’t necessarily reflect any changes in the quality or quantity of the production output. That is why when looking at nominal GBP solely, it is hard to tell whether it grew as a result of production expanding or a price increase.

For this reason, economists use an adjustment for inflation to find, what’s called, an economy’s real GDP. By adjusting the output of any given year for the price levels that prevailed in a reference year, also known as the base year, economists adjust GDP for inflation. Simply put, real GDP is equal to the economic output adjusted for the effects of inflation. It is calculated using the GDP price deflator, which is the difference in prices between the base and the current years. Real GDP accounts for the change in market value, which narrows the difference between output stats from year to year. This way, it is possible to compare a country’s GDP on a yearly basis and see if there is any real growth.

Real GDP comes in handy when comparing the GDP of two or even more years, as it removes the effects of inflation, focusing solely on volume. Nominal GDP, on the other hand, is used when comparing different quarters of output results within the same year.

Commonly, the components of GDP include personal consumption expenditures, government spending, business investment and the balance of trade.
GDP can be determined in three different ways. These are the income approach, the expenditure approach and the production approach.

The income approach is based on the principle that all expenditures in an economy should equal the total income generated by the production of all economic goods and services. It calculates GDP as the total income received by all economic entities within the country, in the form of factor income, such as profit, wages, rental income, dividend income and interest income.

The expenditure method is based on the principle that all the products and services must be purchased by somebody. It means the value of the total production output has to be equal to people's total expenditures in buying goods. It calculates GDP as the total value of personal consumption expenditure, gross domestic private investment, government spending and net of exports over imports within the economy during a given period.

The production or value-added approach is the most direct of the three. It consists of summing the gross value added of all industries in the country. In other words, it calculates GDP as the sum of the value added by all services and goods during their production within the economy during a given period.

It is important to note that all of these methods, in essence, give the same result and yield the same value of GDP.

The World Bank is known to have one of the most reliable online databases, which includes the most comprehensive list of different country’s GDP data. Additionally, the International Money Fund (IMF) also provides GDP data through its multiple databases, including International Financial Statistics and World Economic Outlook. Another very reliable source where GDP data can be found is the Organisation for Economic Cooperation and Development (OECD), which provides both historical data and forecasts for GDP growth.

Find out more about GDP per capita.

To learn more about the gross domestic product, see also GDP per capita and debt-to-GDP ratio.

What is GDP per capita? It's a measure of a country's output using its gross domestic...

What is the debt-to-GDP ratio? This measures a country’s national debt in relation to...

Capital.com What is gross domestic product (GDP) | Definition and Meaning