The Fed and other central banks continue to struggle to contain inflation. In July, another US CPI print above 8% is expected. The BoE has already acknowledged that inflation will persist. Raising the target for inflation to 3% would be more in line with the inflation trend in the coming years and would exert upward pressure on gold. 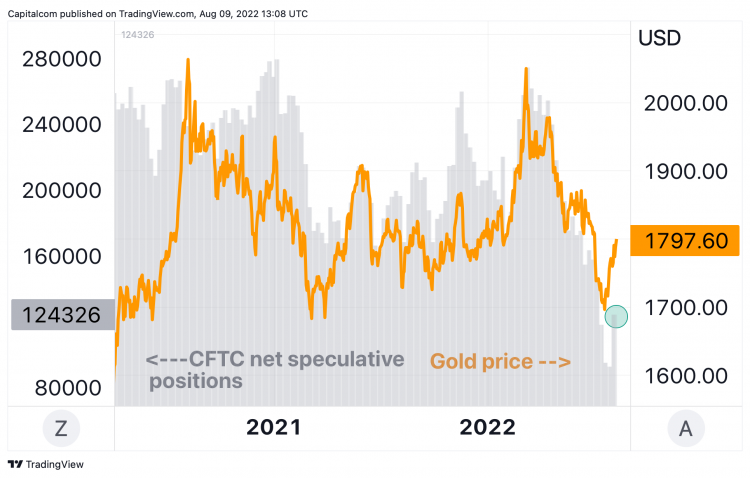 According to the latest Commodity Futures Trading Commission (CFTC) weekly Commitments of Traders (COT) report, gold net speculative positions increased by 34% to 124.3K contracts on the week ending August 2, up from 92.7K the previous week.

This marks the largest weekly increase in gold net speculative positions this year. Speculators' positioning on gold has consistently declined from a peak of 274.4K in the first week of March to 92.7K at the end of July, the lowest level since May 2019.

Despite this increase, gold net long positions remain relatively clean compared to their one-year average, implying that a further increase in sentiment toward gold could lead to significant price upside. 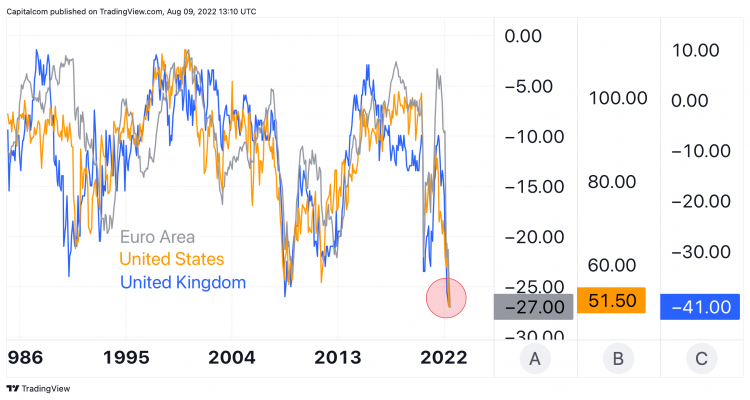 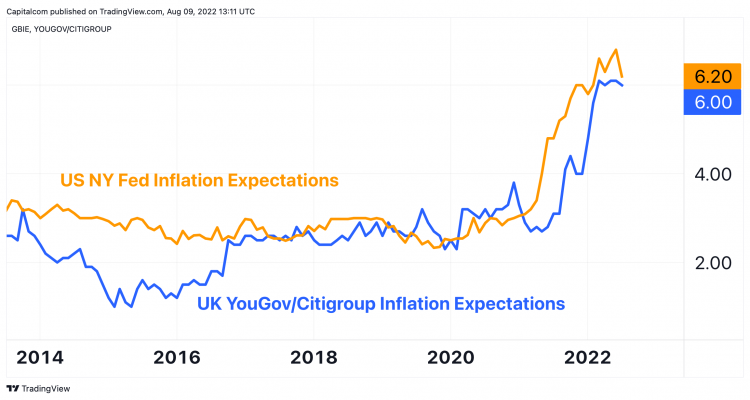 Inflation expectations (UK and US) 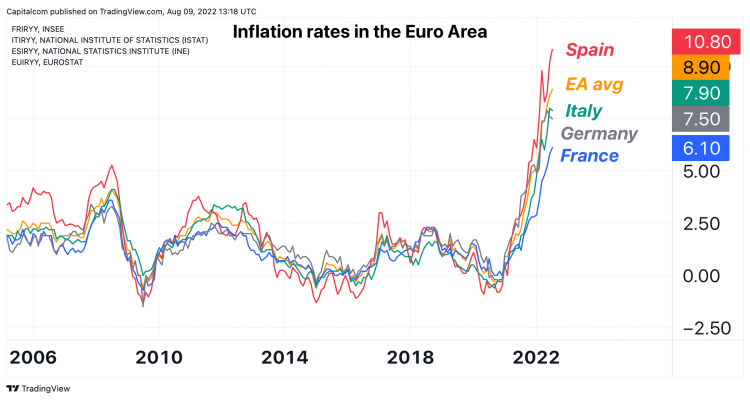 Inflation rates in the Euro Area 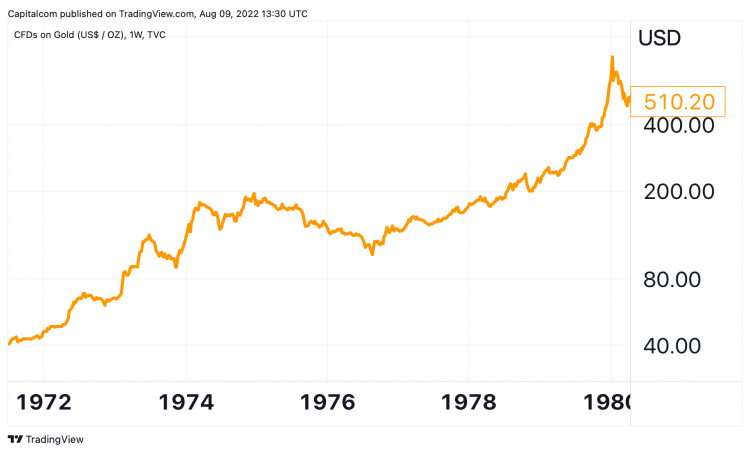 Inflation expectations (UK and US)

Inflation rates in the Euro Area

The United States entered a technical recession in the first quarter of the year, but the labour market remains exceptionally robust.

The US economy added 528,000 nonfarm payrolls in July, more than double what economists predicted, and wage growth continued to overshoot, with a 5.2% annual surge in hourly earnings (vs 4.9% expected).

The Fed now faces the hard task of abruptly and rapidly cooling an extremely hot labour market in order to prevent further wage pressures from translating into higher consumer inflation.

However, clouds of a severe downturn are gathering in Europe, as consumer confidence has plummeted to pre-recession levels in the midst of the gas energy crisis and skyrocketing inflation rates. The fourth quarter of this year will see the United Kingdom enter a prolonged recession, according to the Bank of England, which also warned of the possibility of a lengthy period of price inflation.

A weaker economic outlook and persistently high inflation create the conditions for a prolonged phase of stagflation, a regime where gold has traditionally done well, especially in the 1970s.

The link between gold and inflation is strong and growing 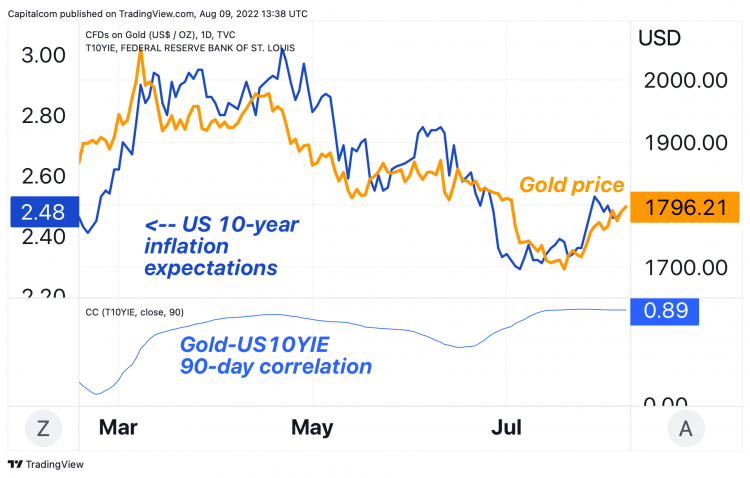 The correlation between gold and inflation expectations (10-year US breakeven rates) has been extremely strong this year, and is currently equal to 0.89 for the 90-day rolling timeframe.

The market currently anticipates that inflation in the United States will average approximately 2.5% over the next decade, which is certainly higher than its 10-year average (1.97%) and the Fed's 2% target.

Gold is therefore seen as a hedge against inflation that stays above than the target for a long time.

If the US CPI continues to come in higher than anticipated and above 7-8% in the upcoming months, more doubts will be raised about whether this inflation can be controlled by raising interest rates alone. This could push inflation expectations higher, weigh on the dollar, and favour gold.

The link between gold and interest rates is negative but fading 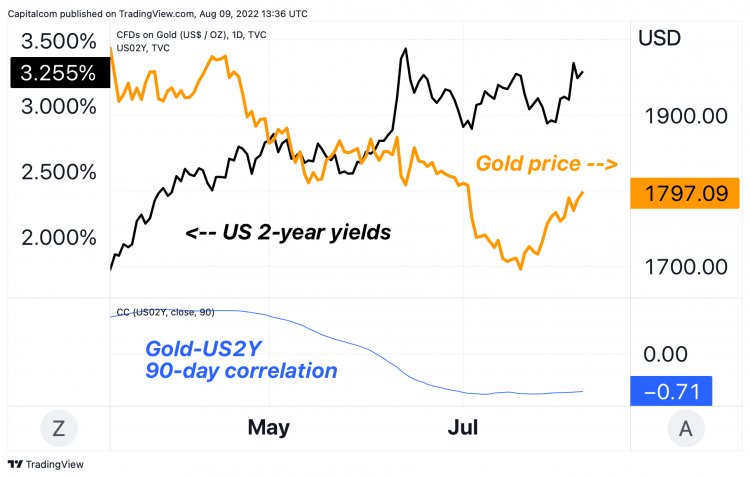 Looking at the relationship between gold and interest rates, expectations of future Fed interest rates hikes have been a drag on gold prices this year. Higher yields on U.S. Treasuries and a stronger dollar have a negative impact on the precious metal because they increase the opportunity cost of holding a non-yielding asset like gold.

The 90-day rolling correlation between gold prices and US 2-year yields - a proxy for the Fed's policy rate in the near future - is currently -0.72, indicating that gold and US interest rates remain negatively correlated.

However, unlike previous Fed rate repricing episodes in May and July, the one that occurred recently following the US job market report did not result in a significant drop in gold prices. Despite rising US two-year yields, gold prices actually rose.

Consequently, this could be an early sign that the negative relationship between gold and the Fed's expected interest rates is beginning to fade, as investors start to believe that raising interest rates alone will no longer enough to keep inflation under control. 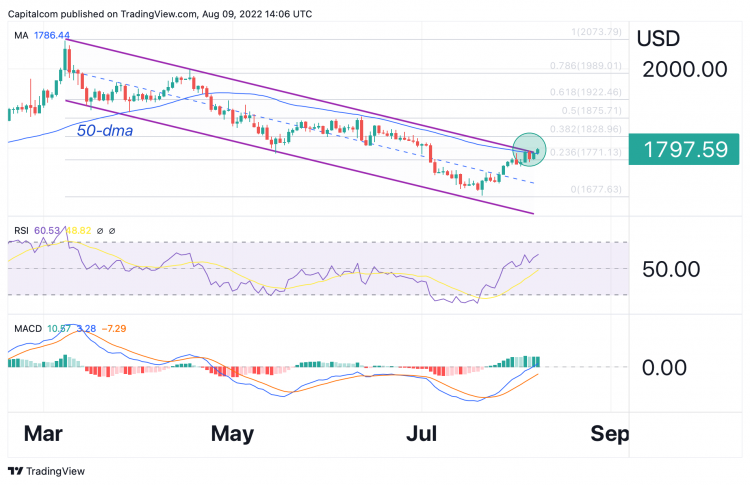 On the daily chart of gold, prices have recently broken out of the descending channel that has been in place since the peak on March 8th, as well as the 50-day moving average (dma).

For the past two weeks, the 14-day RSI has been hovering above 50, rebounding nicely from severely oversold levels in July and indicating that bulls have gained the upper hand in short-term momentum. MACD is also rising, with the MACD line crossing the zero line for the first time since May.

Gold's Fibonacci retracement analysis suggests that the next obstacles to monitor are $1,828 (38.2% Fibonacci retracement level of the high-low range for 2022) and $1,875 (50% Fibo level). Crossing this significant threshold would provide further confirmation of the trend reversal and would likely open the door to a test of the $1,900 psychological mark.