Gold and the US dollar (DXY) have been fighting like heavyweights in a ring since April, with both assets throwing blows and striving to gain an edge.

In the early rounds of the match, the dollar appeared to be in good health thanks to the impetus given by the Federal Reserve's interest rate hikes. But something has begun to itch the greenback's performance in recent days, providing support for the precious metal's rebound and reversal of the trend.

Investors are beginning to fear that if the Federal Reserve tackles inflation too aggressively through interest rate rises, the US economy might enter a recession later on. As a result, the dollar's strength may not be sustainable in the medium run.

Will this be the turning point in the fight, with gold cornering the US dollar in the future rounds? 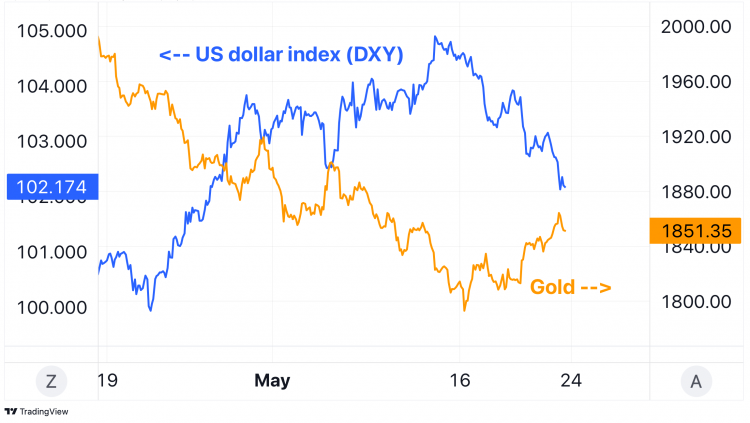 In contrast to what happened in 2021 and at the start of the year, the dollar and gold have been inversely linked since April 2022. As the dollar increased in value, the precious metal slowly depreciated. How can this divergence between gold and the dollar be explained?

The strengthening of the US dollar has been the result of the Federal Reserve's move to change direction and indicate to the market its desire to substantially hike interest rates to combat inflation at its highest level in over four decades.

As a result, investors have anticipated higher interest rates in the United States, which has increased demand for the dollar relative to other currencies, such as the euro and the yen, which are still bound by record-low interest rates.

Precious metals, like as gold, are weakened by rising interest rates (or the expectation of their rise) since they do not now offer stable and positive yields like the dollar at this stage.

What is the gold-to-dollar ratio telling us? 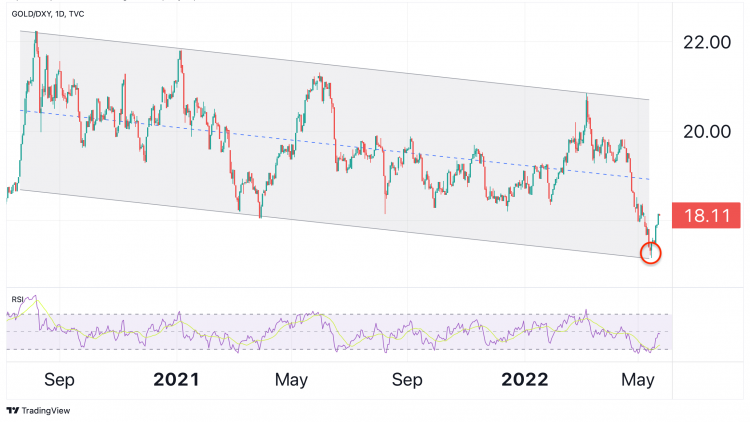 The gold-to-dollar ratio is a barometer that gauges the relative strength of the yellow metal against the performance of the US dollar index (DXY), allowing traders to spot underlying trends in these two key assets.

As seen in the chart above, the gold-to-DXY ratio has been trending lower since the second half of 2020, indicating that gold has underperformed the US dollar.

However, the gold-to-dollar ratio did not fall in a straight line; there were periods when gold outperformed the USD while remaining inside the bearish channel.

Early in May, the gold-to-dollar ratio struck the channel's bottom line and is presently climbing from an oversold position.

This might signal the start of a new period of gold's outperformance against the DXY index.

Why has the dollar's outlook worsened while gold's has improved?

The market has already priced in, to a significant extent, the interest rate rises that are expected to be implemented by the Federal Reserve in the next year or so.

And unless there are more surprises about inflation, interest rate expectations seem stable for now.

In fact, US inflation hit its peak in March, at 8.5% year-over-year, and it has already started to go down, albeit very slowly, in April.

In the meantime, the conflict between Russia and Ukraine, trade restrictions, the crisis in commodities and the global supply chain, and the end of ultra-stimulating monetary and fiscal policies have all had a negative impact on the global economy.

As the chances of an economic recession rise, investors are starting to doubt that the dollar's strength will last too long. Moreover, gold has traditionally performed positively during recessionary periods, as we recently showed here.

This means that the prospect of slower economic growth, which is already happening in China, could relieve the pressure on the Federal Reserve to keep interest rates high for longer, allowing the precious metals to gain.

Gold and silver prices are oversold now: time for buyers to step in?

Capital.com Gold vs dollar: Heavyweight fight could be turning in the metal’s favour