Gold technical analysis: The start of a new bullish trend?

As global stock markets face a revival of volatility owing to growing inflationary fears and geopolitical tensions between Russia and Ukraine, gold has aroused investors' interest in recent weeks.

The precious metal surpassed the significant technical resistance level of $1,850 per ounce on February 11, extending the rally toward the $1,865-70 region on February 14.

Last week, the annual rate of inflation in the United States hit 7.5% in January 2022, the highest since February 1982, fueling market expectations of more aggressive Federal Reserve interest-rate hikes, but without undermining the bullion's recovery.

As the correlation between bonds and equities continues to strengthen, with both assets losing ground hand in hand since the beginning of the year, gold has been increasingly seen as a portfolio diversifier, with the potential to offer a hedge in a context of high geopolitical uncertainty and galloping inflation.

Technically, gold prices have recently recovered from the lows of January 28, exceeding the highs of January 25 ($1,853), and triggered some bullish technical signals that will be closely analysed in the paragraphs below. 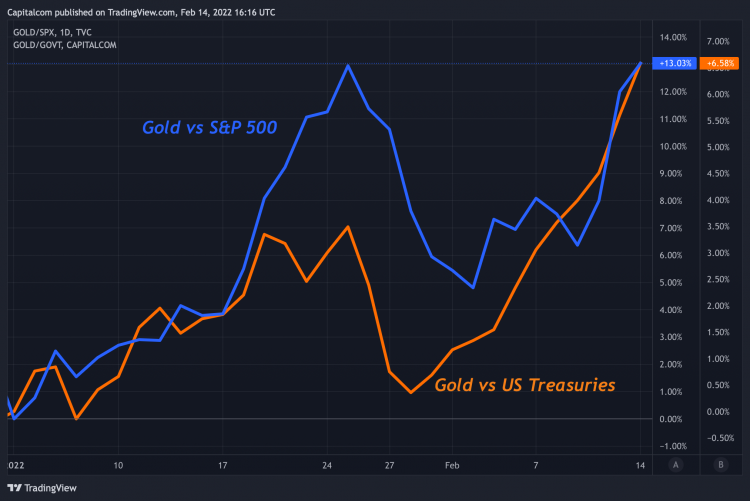 Typically, investors fleeing stocks would seek refuge in the safe haven of government bonds (US Treasuries) to protect their assets. As a result, bonds and stocks move in opposite directions (negative correlation) during period of volatility in risky assets markets.

However, since the beginning of the year, both the stock and the bond market have experienced negative returns, with gold beating both considerably. 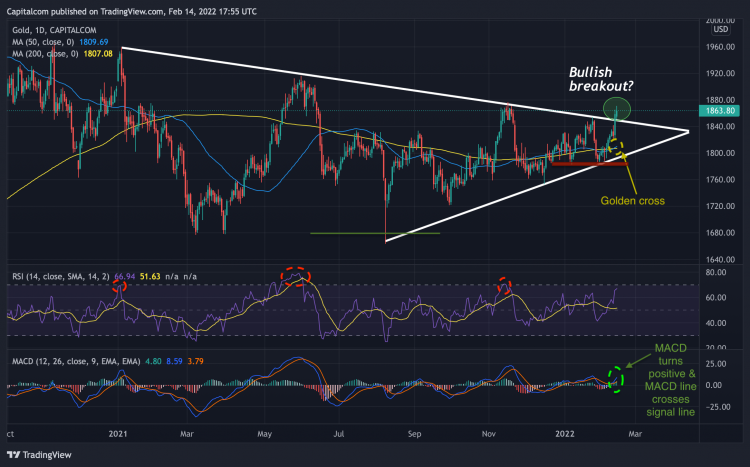 On February 14, gold made an upside breakout of the triangle pattern that had been in place since mid-December.

The positive price momentum has been also recently reinforced by the formation of a golden-cross pattern, as the 50-day simple moving average (SMA) crossed below the 200-day SMA on February 10.

The moving average convergence divergence (MACD) indicator turned positive last week, with the MACD line crossing below the signal line, for the first time since January 10.

On the daily chart, the 14-day relative strength index (RSI) is approaching the 70 (overbought) mark, which has been hit on three times, forming the descending highs of the triangle pattern. As a result, if overbought levels are reached, it is prudent to watch any profit-taking behavior.

On the downside, a major support level of $1,780 might be spotted. If prices breakout below $1,780, the possibility of an uptrend is much reduced, reopening the prospect of a further downward action towards $1,720 (lows of September 2021).