Why has Newmont Corporation (NEM) fallen so much recently?

Why has Newmont Corporation (NEM) fallen more than other gold miners?

What is the outlook for Newmont Corporation (NEM)?

The world’s biggest gold miner, Newmont Corporation (NEM) has fallen almost 48% since its mid-April highs, as the company missed second-quarter earnings and raised input costs for 2023. Newmont Corporation currently has a market capitalization of about $35.39 billion, as of August 2022.

In the last two weeks, Newmont Corporation (NEM) has substantially underperformed the gold mining sector, as represented by the VanEck Gold Miners ETF (GDX), by more than 15%.

Has Newmont reached a bottom, or does it still have room to fall?

Why has Newmont Corporation (NEM) fallen so much recently?

This has led investors to believe that the company was facing issues with input costs rising faster than expected, which was one of the key drivers of the second quarter. This has led the market to have a negative reaction, following the company publishing its second quarter results on July 25th, causing shares to plummet. Moreover, speculations of this not being a one-off event, but rather, a precursor to a long period of higher inflationary pressures and rising costs. The company also seems to be struggling somewhat in North America, as production seems to be dipping there

The steep fall of the last few months has mostly been prompted by rising costs impacting the price of input materials and labour costs especially, which the company also highlighted in their H1 2022 results. This has been coupled with falling metal, especially gold prices, which took a huge hit on the company, as gold production is the bulk of its output.

The company has also significantly increased its capital expenditure, up by 25% since last year, worth about 104 million, which also took a toll on profit margins. Moreover, higher fuel and energy costs, due to ongoing supply chain issues from the Russia-Ukraine conflict also ate into profit margins.

Newmont Corporation (NEM) also signed a profit-sharing agreement with the Penasquito mine union in Mexico, worth approximately $70 million, which was yet another big hit to the company’s margins lately. Not only that, but the company also faced increased COVID-19 costs of about $10 million during the second quarter of the year, in order to maintain health and safety standards, most of which were unable to be adjusted from their non-GAAP metrics.

What is your sentiment on NEM?

Give NEM a try

Why has Newmont Corporation (NEM) fallen more than other gold miners?

Falling gold and other metal prices have affected mining companies across the board in the last few months, with Rio Tinto (RIOgb) and Anglo American (AALI) already having announced lower earnings and slashed dividends. Gold miners have more or less mirrored each other in their rise and fall over the last few months.

Barrick Gold (ABX) has also fallen almost 36% since mid-April, with Franco Nevada (FNVca) falling about 21% since the same time as well. A number of gold as well as other miners have also cut production guidance for the rest of the year as well as 2023, due to rising costs, as well as the fear of aggressive monetary tightening by the US Federal Reserve pushing the US economy into recession.

However, Newmont Corporation (NEM) has fallen more than other gold miners lately due to a few very important factors. The first one is falling gold prices. As the company is leveraged to gold prices, when they fall, the miner takes a big hit. Furthermore, unlike other gold miners, the company does not hedge its gold sales, which means that it suffers more on a downturn and profits more from an upturn.

What is the outlook for Newmont Corporation (NEM)?

Newmont Corporation (NEM) has recently lowered its gold production outlook for the near future, on account of continuing labour shortages and operational challenges at one of its mines. It has thus revised its attributable gold production for the year to 6 million ounces, a let down from the previous 6.2 million ounces. The company has also received a “hold” rating from a consensus of analysts.

According to Piero Cingari, analyst at Capital.com, "Newmont (NEM) stock prices have been falling precipitously, halving in value from highs of $86 in mid-April.On July 25, following the release of the disappointing second-quarter results, the stock fell to a year-to-date low of $44.Since then, however, a very solid support appears to have formed at $44, which has not been broken downwards, indicating that the sellers’ strength may have worn off.

NEM may have bottomed out here, but it has yet to gain traction, as prices have remained in a tight range between $44 and $47 for the past two weeks. The RSI is still in oversold territory (26) but is rising slightly. Instead, the MACD provides a bullish crossover signal as the MACD line crossed from below to above the signal line.If we are on the verge of a new bull trend, the first hurdle to overcome is undoubtedly the psychological level of $50, which served as support prior to July 25th.

A breach of this level would also lead to a breakout of the 2022 bearish trendline and encourage a test of $54.04 (the 23.6% Fibonacci retracement level from April 2022 high to July 2022 low). Alternatively, if there is a fresh round of pessimism, the market may retest the $41-41.7 level that served as support in March and April of 2020." 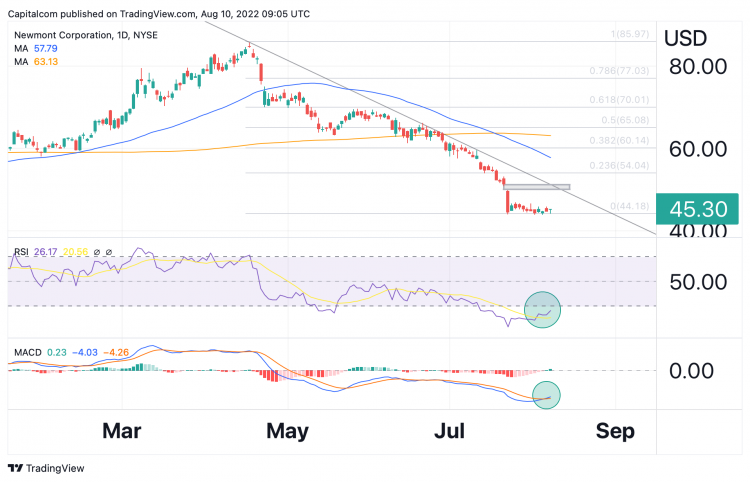 Newmont Corporation's fall in price may already have been priced in by investors – Credit: TradingView