Take a look at who's making a comeback. Gold prices are back above $1,700 per ounce, where they were in mid-September, after a 5% weekly rise as of October 4, European trading hours.

A sharp drop in Treasury yields and a slightly weaker dollar aided gold's rise recently, as the market begins to speculate on the end of Federal Reserve rate hikes.

The most recent macroeconomic data indicate an ongoing economic slowdown and have bolstered market expectations for a Fed policy reversal. The ISM Manufacturing PMI fell unexpectedly to 50.9 in September 2022, down from 52.8 in August and below market expectations of 52.2. Also in September, the University of Michigan consumer sentiment was revised down to 58.6 from 59.5.

Is this the end of the gold's bear market and the start of a new rally for the precious metal, or is the market pricing in the end of rate hikes too soon?

Gold vs US Dollar and Real yields 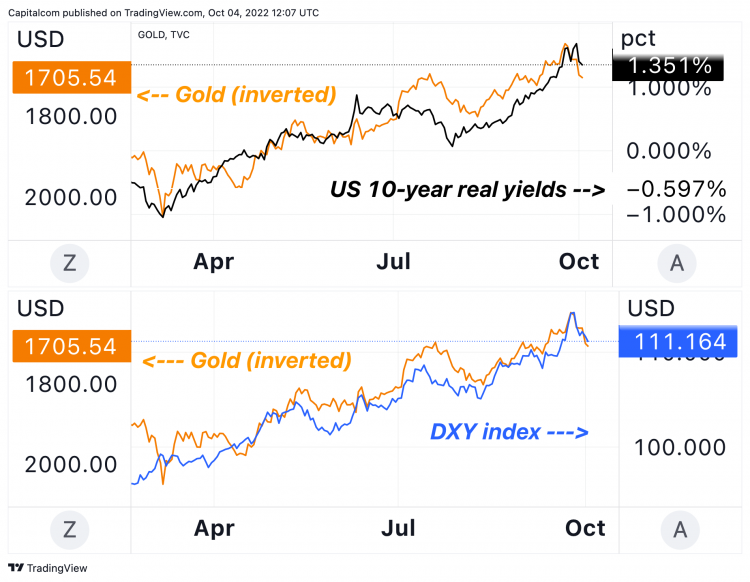 US 10-year Treasury yields have fallen nearly 40 basis points from their September highs of 4%. The movement in nominal yields was marked by a drop in real yields, as investors begin to price in lower Fed interest rates next year.

Gold fundamental analysis: A glimpse of light at the end of the tunnel?

The recent price movement in gold does not, in my opinion, clearly indicate a reversal of the metal's major bearish trend, but there are some early signs that the worst may be behind us.

Gold typically performs very well when there is the smell of an impending economic recession.

Such a connection is grounded in the conventional wisdom that rate-sensitive assets like gold benefit from the Federal Reserve's accommodative monetary policy during economic downturns by way of interest rate cuts.

Is the Federal Reserve's hiking cycle truly at a crossroads?

In this case, the market may be playing too soon for some reasons.

Therefore, the movements in gold prices over the past few days represent more of a breath of oxygen rather than a major reversal trend in the market.

However, gold could continue to do well in the coming weeks if we continue to see negative and worse-than-expected economic data. 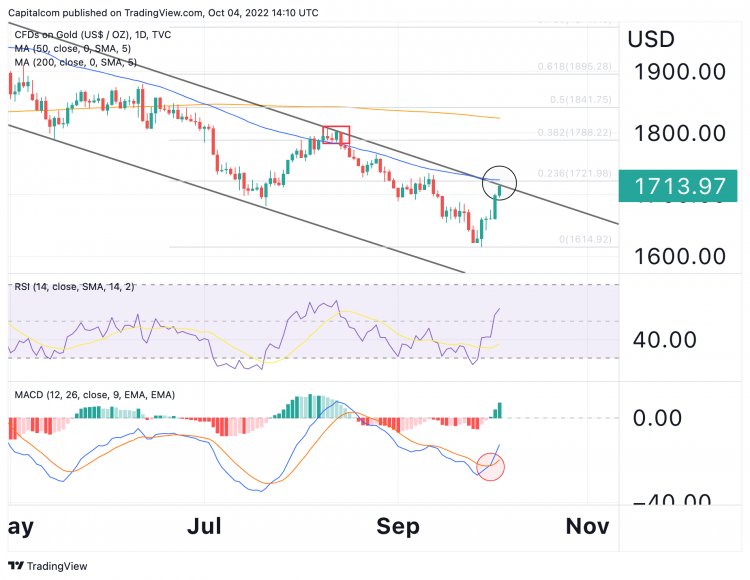 Gold prices are currently testing a multi-resistance region between $1,710 and $1,720, which is given by the bearish trendline from March's 2022 highs, the 50-day moving average, and the 23.6% Fibonacci retracement levels of 2022 high-low.

Gold prices previously met resistance at the 2022 bearish trendline and retreated in mid-August.

From the oscillator analysis, we can see that the MACD is forming a bullish crossover and that the RSI is moving above 50 for the first time since mid-August, supporting a short-term positive momentum.

The break of this multi-resistance region could signal an extension of the bullish wave towards $1,788 (38.2% Fibonacci) and $1,800-1.810 (August highs) as potential short-term targets. If prices retreated from the resistance, a stop loss could be placed at 1,680.

Key data to watch for gold