News and Analysis News Forex GBP/USD analysis: UK inflation shock and gas crisis are here to stay - how will the pound perform?
Menu

GBP/USD chart to watch: US natural gas trades at steep discount to UK gas, weighing on the pound

BoE interest rates: What the market is pricing in? Will the pound benefit?

GBP/USD technical analysis and forecasts: retest of 1.175 in sight?

For the first time in over 40 years, the UK inflation rate in July 2022 topped the double-digit mark (10.1% year on year), while core inflation, which excludes energy and food items, rose by 6.2% in the year, marking the highest increase since the series began in 1997.

The pound has lost 12% against the dollar (GBP/USD) in the past year due to a widening interest-rate gap between the Federal Reserve and the Bank of England (BoE) and worsening macro fundamentals in the UK. The consumer inflation shock in the UK and Europe is backed by stubbornly high production costs, especially wholesale oil and gas. The UK producer price index is 17.1% higher than a year ago, the highest rate since July 1980.

As we recently highlighted in our latest EUR/USD analysis, the widening gap in gas prices between Europe and the United States is becoming a key macro factor influencing exchange rate movements. Not even the pound is exempt.

This creates a significant trade advantage for the dollar versus the pound and the euro.

With a recession looming over the UK, will the Bank of England have enough leeway to raise interest rates and support the pound? Or will the energy crisis and gas price disparity between the United Kingdom and the United States continue to boost the US dollar?

GBP/USD chart to watch: US natural gas trades at steep discount to UK gas, weighing on the pound 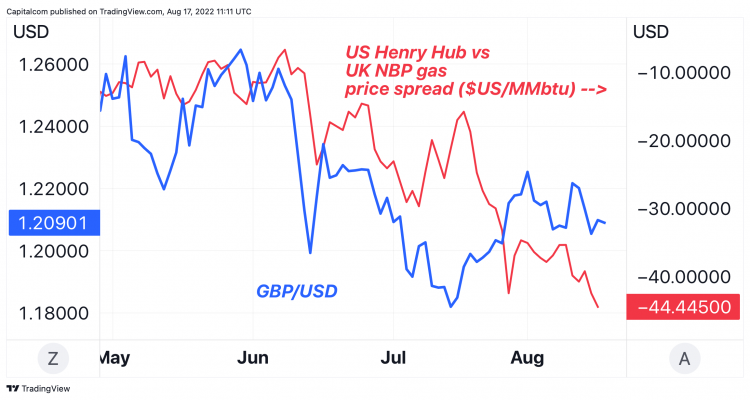 Europe is experiencing its worst energy crisis in history, which is materially worsening the UK's economic and trade fundamentals.

Inflation in the UK has risen above the danger zone, according to all available indicators. The CPI index is up 10.1% year on year, the core CPI is up 6.2%, the PPI is up 17.1%, and Yougov/Citigroup public inflation expectations are at their highest level ever (6%). 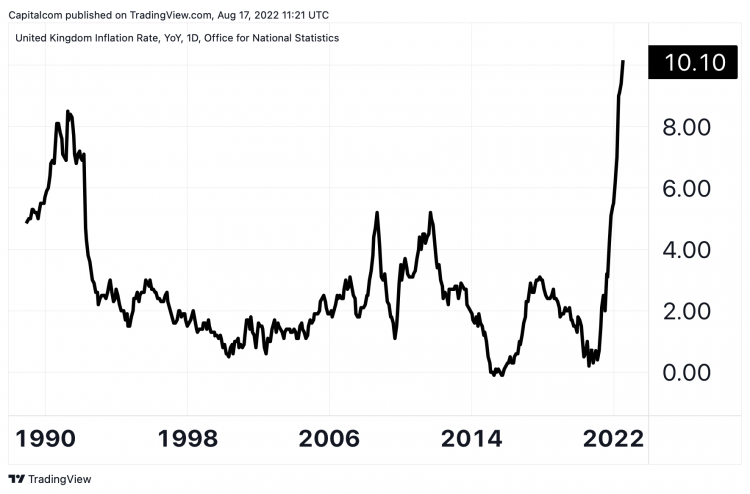 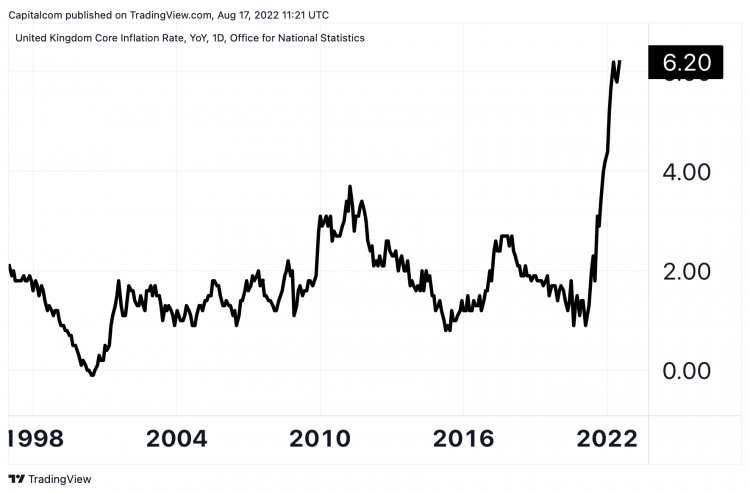 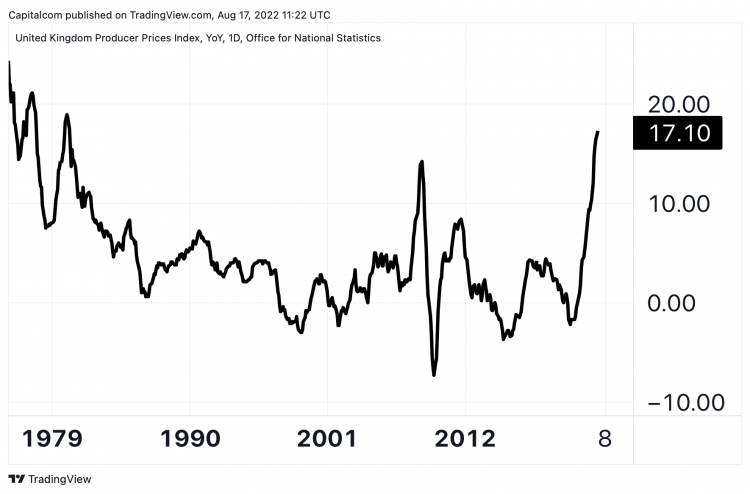 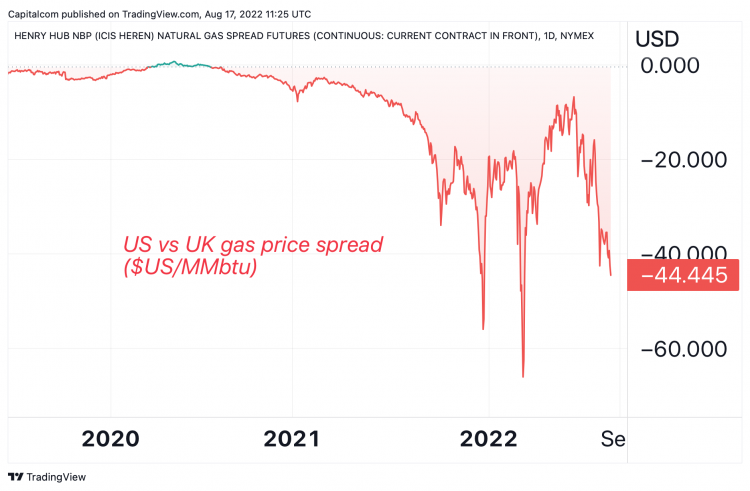 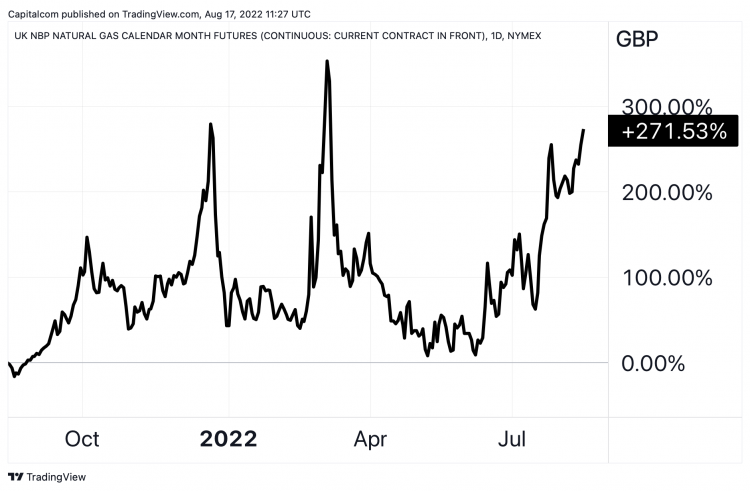 Real wages (adjusted for inflation) are 5% lower than a year ago, the lowest level since the financial crisis of 2009, which will likely have a negative impact on future consumption. According to the Gfk Group survey, consumer confidence remained severely depressed at all-time lows (-41) in July. Falling real wages and low consumer confidence have historically been linked to impending economic downturns in the UK.

In its July meeting, the BoE predicted a protracted economic downturn beginning in the fourth quarter of this year. This will likely hurt the pound, especially if the US avoids a major recession.

BoE interest rates: What the market is pricing in? Will the pound benefit? 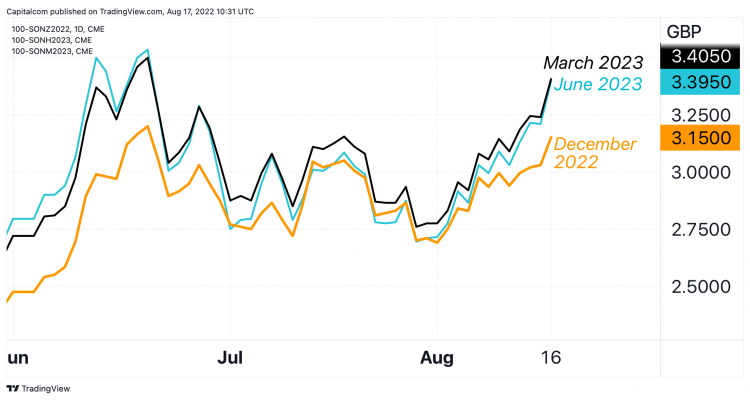 Market expectations for the Bank of England's future interest rates can be measure by using the Sterling Overnight Index Average (SONIA) Futures.

As of August 17, 2002, the markets are fully pricing in a 50-basis-point hike by the Bank of England in September, which will bring the policy rate to 2.25 percent.

Market participants expect UK interest rates to reach 3.15% by the end of the year, representing a 140 basis point increase from the current rate (1.75%).

Despite the fact that the UK is expected to enter a recession by the end of the year, the BoE's rate hike cycle is expected to cease only by mid-2023. Markets expect UK interest rates to rise to 3.4% by March 2023 and then remain unchanged in June 2023.

Raising interest rates is the Bank of England's first line of defence against a major depreciation of the British pound. However, if inflation remains stubbornly high and the gas crisis worsens, weighing on economic growth, rate hikes alone will not be enough to keep sterling afloat, especially if the US economy continues to hold up relatively better.

GBP/USD technical analysis and forecasts: retest of 1.175 in sight? 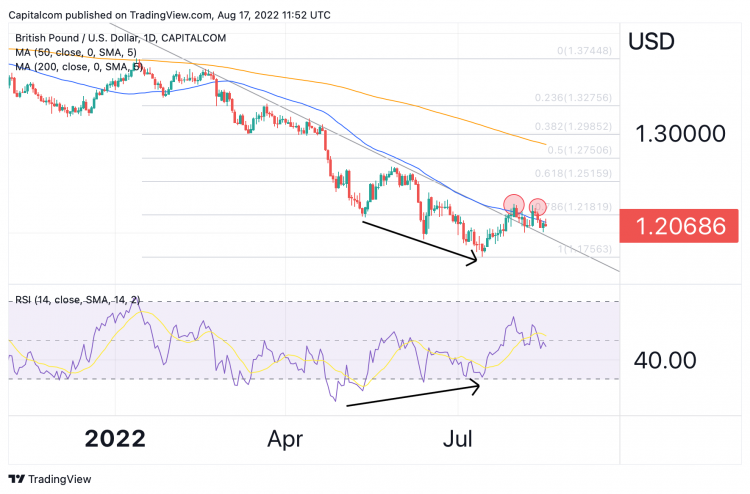 The pound's relief rally appears to have stalled in the last few sessions after reaching a double top at 1.228 levels.

1.20 provides a psychological and August support level for the pair. Breaking below this level would increase bears' chances to test 1.19, first, and 1.175 (2022 lows) after.

However, the range between 1.188 and 1.195 was a consolidation zone between June and July, and dip buyers may return to this region. On the upside, bulls must break through the 1.229 resistance before aiming for the 1.241 (June 16 high) levels.

Capital.com GBP/USD analysis: UK inflation shock and gas crisis are here to stay - how will the pound perform?