GBP/USD has seen another boost this morning as the consumer inflation data has confirmed that price pressures remain highly elevated in the UK. Headline inflation, which includes volatile prices like energy and food, did come down slightly from a year ago (10.5% vs 10.7%) but the monthly growth remains unchanged at 0.4%, which highlights the ongoing inflation dilemma in the region.

Core inflation actually rose on a monthly basis, with the year-on-year figure unchanged at 6.3% but above expectations of a small drop. This puts further pressure on the Bank of England to act more forcefully to bring down inflation and ease the cost of living crisis on UK households.

Markets are now gearing up towards a 50bps hike on February 2nd which would take the bank rate to 4%, the highest level since the 2008 financial crisis. The market-implied yield currently stands at 3.86%.

Given how the recent data has shown resilience in the UK economy it seems like it should be pretty much a done deal for Governor Bailey and the Monetary Policy Committee (MPC) to hike rates another 50bps but given their reluctance throughout the last year markets are not fully convinced they will go for 50bps over 25bps, hence the implied yield hovering below 4%. 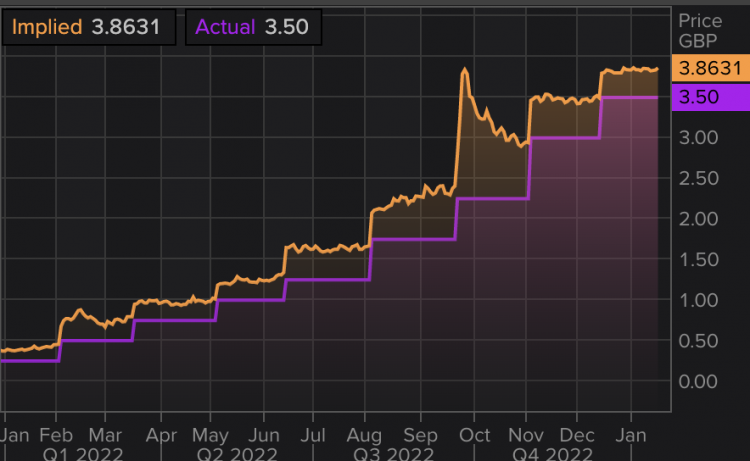 The focus over the next two weeks heading towards the MPC rate decision will be any comments from voting members that give further insight into what can be expected on February 2nd. We also have some more data coming out before then, including retail sales this Friday and PPI next Wednesday but the brunt of the data has already been priced in.

On the charts, GBP/USD has managed to build momentum higher over the last 2 weeks and is now sitting comfortably above its key moving averages, which gives buyers a slight advantage. The higher core CPI reading has boosted hopes of a more hawkish Bank of England which has been keeping GBP pushing higher in recent months, especially now that the Fed has started slowing down its hiking schedule. The next challenge for buyers is the December high at 1.2446 which was reached just before the December BOE meeting which showed that Gov Bailey is still playing hard to get and focusing his efforts on not over-tightening and damaging the economy in the process.

Past this area, we face the highs from May at 1.2666 but I wouldn’t be surprised if we see some sideways trade around 1.25 on the move higher, similar to what happened back in June. The path of least resistance seems to remain to the upside so further upside momentum is likely, but similar to what we’ve seen this month so far, we may see the pair come off from its daily highs as it moves higher, showing some resistance from sellers to let go. I think that as long as we see GBP/USD holds above its 200-day SMA (1.1982) then we’ll see modest gains heading into the BOE meeting in two weeks. 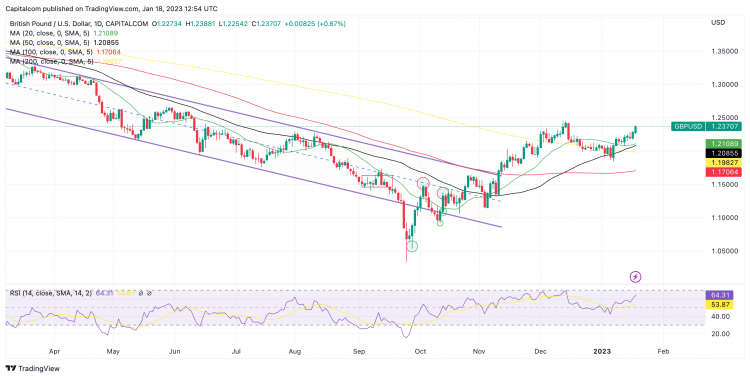 Natural Gas 2.769
Trade
+2.600%
US100 12037.3
Trade
+0.870%
BTC/USD 23138.75
Trade
+1.530%
XRP/USD 0.40357
Trade
+2.060%
Oil - Crude 79.21
Trade
+1.670%
The difference between trading assets and CFDs
The main difference between CFD trading and trading assets, such as commodities and stocks, is that you don’t own the underlying asset when you trade on a CFD.
You can still benefit if the market moves in your favour, or make a loss if it moves against you. However, with traditional trading you enter a contract to exchange the legal ownership of the individual shares or the commodities for money, and you own this until you sell it again.
CFDs are leveraged products, which means that you only need to deposit a percentage of the full value of the CFD trade in order to open a position. But with traditional trading, you buy the assets for the full amount. In the UK, there is no stamp duty on CFD trading, but there is when you buy stocks, for example.
CFDs attract overnight costs to hold the trades (unless you use 1-1 leverage), which makes them more suited to short-term trading opportunities. Stocks and commodities are more normally bought and held for longer. You might also pay a broker commission or fees when buying and selling assets direct and you’d need somewhere to store them safely.
Capital Com is an execution-only service provider. The material provided on this website is for information purposes only and should not be understood as an investment advice. Any opinion that may be provided on this page does not constitute a recommendation by Capital Com or its agents. We do not make any representations or warranty on the accuracy or completeness of the information that is provided on this page. If you rely on the information on this page then you do so entirely on your own risk.