EUR/GBP chart analysis: Who is the least bad?

The Bank of England (BoE) raised its Bank rate by half a percentage point to 1.75 percent at its August meeting, the highest rate hike in the UK in 27 years, owing to elevated inflationary pressures exacerbated by Europe's recent gas crisis.

The move to raise interest rates from 50 basis points had gained traction among market participants in recent weeks, and thus the pound had already largely priced in this event.

So why hasn’t the pound rallied after the BoE’s strong rate hike? 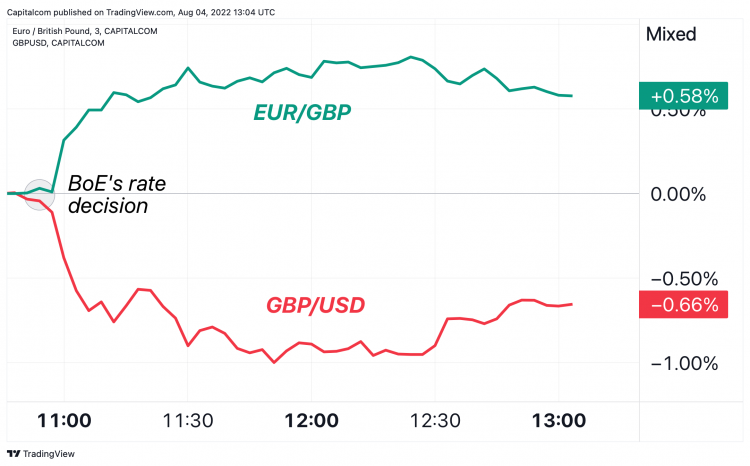 The answer lies in the lines of the BoE's policy statement, which paints a bleak economic picture for the United Kingdom in the coming years, given the combination of sluggish growth and persistently high inflation.

"GDP growth is slowing," and the UK is now expected to enter recession in the fourth quarter of this year. According to BoE Governor Andrew Bailey, this will be similar to the UK recession of the early 1990s, but less severe than the Great Financial Crisis of 2008. Real household post-tax income is projected to fall sharply in 2022 and 2023, given adverse impact on rising gas and global energy prices on household incomes.

Regarding the inflation outlook, the BoE expects inflation to peak at 13.3% in October this year. Then, the slowdown in domestic demand and the worsening economic picture are expected to reduce inflationary pressures over time. However, the Bank of England warned of the risk of more persistent price inflation leading to longer-lasting domestic price and wage pressures, which would be incompatible with the goal of bringing inflation to the 2% target.

On the rate guidance, the BoE stated that there is no predetermined path and that it will be decided meeting by meeting, similar to what the Fed and RBA recently stated, thus disappointing GBP bulls who expected a more hawkish BoE. “All options are on the table for September meeting and beyond that” and “uncertainties around the outlook are exceptionally high”, BoE Governor Andrew Bailey said during the press conference. 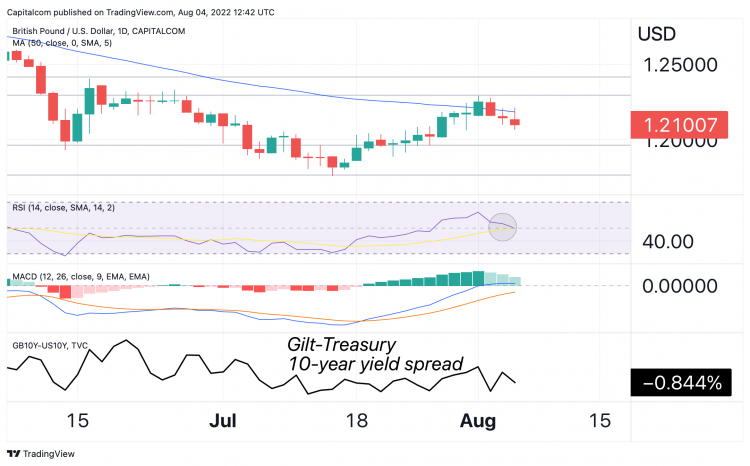 Despite the rate hike, the BoE cooled the cable (GBP/USD) due to the dire economic projections.

The United States is also likely to experience an economic slowdown, but it appears to be less vulnerable to rising energy prices than the United Kingdom and other European countries. As a result, the dollar could benefit from a differentiating factor against currencies like the British pound and the Euro, which would be affected by a drastically worsening macro picture.

If the US continues to demonstrate solid economic resilience, there is a risk that the rate differential between Treasuries and gilts, which is currently around 0.85% (or 85 basis points) for the 10-year maturity, will widen further, putting pressure on the GBP/USD exchange rate.

From a technical standpoint, the daily RSI fell below 50 and the MACD appeared to have peaked around the zero line, indicating the beginning of a downtrend.  Looking at the daily chart, the next level of support is at 1.195 (lows of July 26).

If GBP/USD breaks below this level, a retest of the psychological level of 1.18 and the 2-year lows at 1.176 is likely. In contrast, a recovery to 1.228 (highs of August 2) and above that to 1.24 (highs of June 16) requires a combination of weaker-than-expected NFPs and a quicker-than-forecasted slowdown in US inflation rates, which would support a Fed's dovish repricing.

Bottom line, both fundamentally and technically, the dollar appears to have the upper hand against the pound at the moment. This case will be further strengthened if upcoming non-farm payrolls in the United States exceed expectations.

EUR/GBP chart analysis: Who is the least bad? 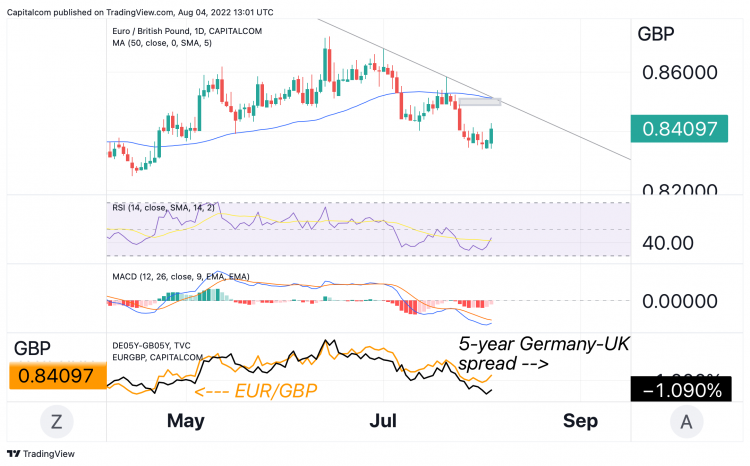 Since both the UK and Euro area economies are exposed to similar shocks and negative effects real incomes and consumption, the euro and the pound are racing to see which currency will perform less poorly in terms of economic growth in the upcoming months. Markets will be less concerned about the BoE-ECB policy divergence and more focused on economic indicators going forward.

A sideways phase, characterized by fairly tight trading ranges, could therefore come forward for EUR/GBP in the near term, pending more information on the length and size of the recessions.

On a technical level, 0.849-0.85 already represents an area where the euro could see selling pressure. Downwards, 0.834 has shown solid support over the past weeks, despite the market pricing in the BoE’s 50 basis point hike in advance.

Rising RSI and MACD attempting a bullish crossover can provide the EUR with a very slight tailwind in the very short term. However, the single currency lacks the catalysts that could lead to a material appreciation against the pound.

The 5-year yield spread between Germany and the United Kingdom, which has been strongly correlated with the EUR/GBP exchange rate, should be constantly monitored, to keep track of the relative growth outlook between the Euro Area and the UK economy.

Canadian petrodollar: What is the outlook for USD/CAD as oil prices ease?

Currency wars: Yen battles back, but can rally survive US jobs data?

Capital.com USD/GBP weakened after the Bank of England (BoE) raised its Bank rate by half a percentage point to 1.75% as UK economy is expected to enter a recession at the end of the year. Read more...