News and Analysis News Forex GBP/USD analysis: Pound sinks to March 1985 levels. Is the worst yet to come?

The last time the pound (GBP/USD) traded below 1.14 against the dollar was in March 1985, when seven-time Formula 1 world champion Lewis Hamilton was born just two months earlier in Stevenage, UK.

On the 30th anniversary of the 1992 Black Wednesday, the pound fell to its lowest level in more than 37 years, losing 17% of its value since the start of the year, amid dismal economic data painting the UK economy on the brink of recession.

Retail sales in the UK plunged in August, falling 5.4% year-over-year and 1.6% month-over-month well below expectations of a 4.2% and 0.7% drop, respectively.

The UK CPI report released this week on Wednesday left little room for optimism, despite the fact that overall inflation in the UK fell to 9.9% in August from 10.1% in July. The core inflation rate, which excludes energy and food, reached a new record high of 6.30% year-over-year in August 2022, indicating that the inflationary crisis has already spread like a wildfire to the entire UK consumer basket.

Monthly timeframes in the GBP/USD price chart are needed to get back to 1985 levels.

According to the monthly GBP/USD chart, the next significant support is now located at 1.077 (February 1985 lows), which marks the all-time low for the pound.

The monthly relative strength (RSI) index is deep in "oversold" territory, but this hasn't been enough to prompt buying on dips so far. GBP/USD's monthly RSI dropped even lower during the 1984 and 2008-2009 crises.

The long-term major bearish trend, starting from the highs of $2.07 in November 2007, continue to follow a falling wedge pattern. The support trendline connecting lower lows – 1.43 in February 2009 and 1.22 in September 2016 – is pointing straight towards the all-time lows at 1.077.

The daily chart of the GBP/USD pair also shows a steep declining channel, with the pair hitting -17% year-to-date.

The daily RSI has hovered below the mark 50 since mid-August, reaching oversold levels on August 31 and then exiting shortly thereafter.

The most recent GBP/USD price action, however, sends the oscillator pointing south once more, indicating that bears maintain complete control of the short-term trend.

"God save the Pound": Can the BoE come to the rescue? 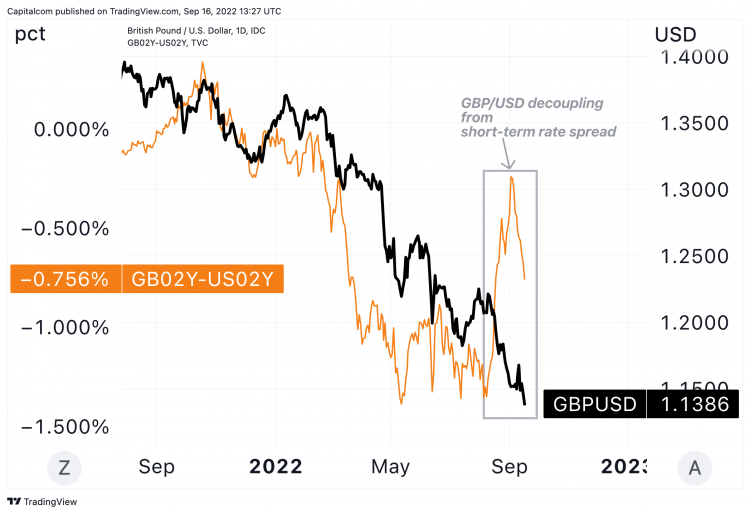 The pound's massive depreciation is justified by the rapid deterioration of the UK macroeconomic fundamentals, as explained here.

The Bank of England (BoE) is in the worst possible position for a central bank because it must raise interest rates even though the economy is heading to a recession.

However, the anticipated rate hike by the Bank of England may not be sufficient to significantly reverse the pound's downward trend.

Even if the BoE hikes interest rates by 75 basis points on Thursday 22, as I expect, this move won't reduce rate differentials with the Federal Reserve, which will likely deliver a similar hike a day earlier.

Additionally, GBP/USD has already started to decouple from its correlation with short-term interest rates between the UK and the US. As the chart above shows, the 2-year yield spread between gilts and Treasuries has recently moved in the opposite direction of the GBP/USD trend.

This means that in the currency market, investors are beginning to factor in downside risks other than rate differentials for the pound, such as the likelihood of inflation spiralling out of control and necessitating emergency interest rate hikes from the BoE.

As UK real interest rates remain close to record lows of -8%, the market is likely to test the BoE's ability to deliver outsized interest rate hikes in the coming period. 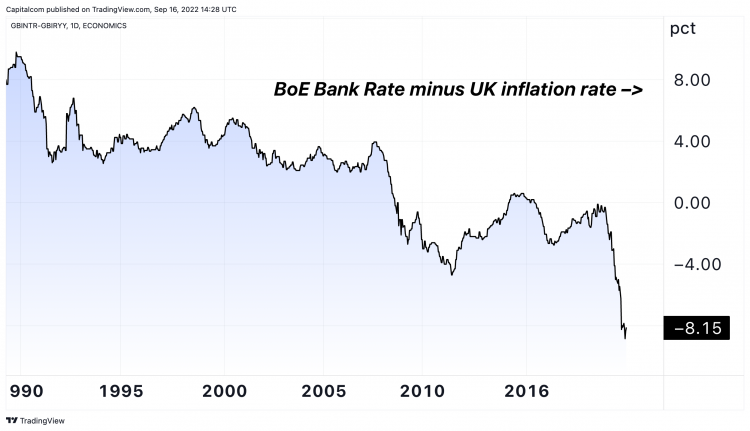 Real interest rates in the United Kingdom are at their lowest levels ever – Photo: Capital.com, Source: Tradingview

Capital.com GBP/USD analysis: Pound sinks to March 1985 levels. Is the worst yet to come?