What drives the GBP/PLN pair?

GBP/PLN forecast: Will the zloty depreciate further, or will the pound weaken?

Where does that leave the British pound to Polish zloty forecast?

The British pound (GBP) has gained in value against the Polish zloty (PLN) in the past month as the central bank of Poland raised interest rates by 0.25 basis points less than expected in July. The Bank of England (BoE), which hiked rates by 50 basis points on 4 August, is expected to continue raising rates, while providing relative support to the pound.

But currency analysts are cautious on the outlook for both the pound and the zloty in the coming months, based on the macroeconomic environment with decades-high inflation and looming recession. What does that mean for the value of the GBP/PLN foreign exchange (forex, FX) pair?

In this article, we look at the key drivers for the exchange rate and the pound to zloty forecast round-up.

What drives the GBP/PLN pair?

The GBP/PLN forex pair refers to how many Polish zlotys – the quote currency – are required to buy one British pound – the base currency.

The name for the Polish zloty is derived from the Polish word for gold – zloto – and was first used as the country’s currency in the 14th Century. The current version of the zloty dates back to 1995 when the PLZ was redenominated as the PLN. Poland joined the European Union (EU) in 2004 with plans to adopt the euro (EUR) as its national currency. But it has not set a target date and euro sceptics in the government are resisting pressure to join the single currency in the near term.

The value of the pound sterling has largely been driven by the status of the Brexit process since the UK voted to leave the European Union in a 2016 referendum. The pound has weakened since the start of the Covid-19 pandemic on a combination of economic uncertainty, rapidly rising inflation and political instability, falling in July to its lowest level against the US dollar since 1985.

The Polish zloty, Czech koruna (CZK) and Hungarian forint (HUF) are considered to represent the performance of central and eastern European (CEE) currencies. The CEE currencies have been affected in 2022 by geopolitical events such as the Russian-Ukraine war driving up energy prices and US-China tensions increasing over the status of Taiwan.

What is your sentiment on GBP/PLN?

Give GBP/PLN a try

Start trading
or
Try demo
“The zloty does not respond purely to domestic factors (especially the NBP’s monetary tightening), but remains largely driven by external developments.”

The GBP/PLN exchange rate reached a high above 6 in November 2015, subsequently retreating as the value of the pound fell in 2016 in response to the outcome of the Brexit referendum. GBP/PLN dropped to a rate of 4.74 in September 2016, although it rebounded to 5.27 by the end of the year. The pair dropped again to 4.60 in August 2017, its lowest level since 2011. 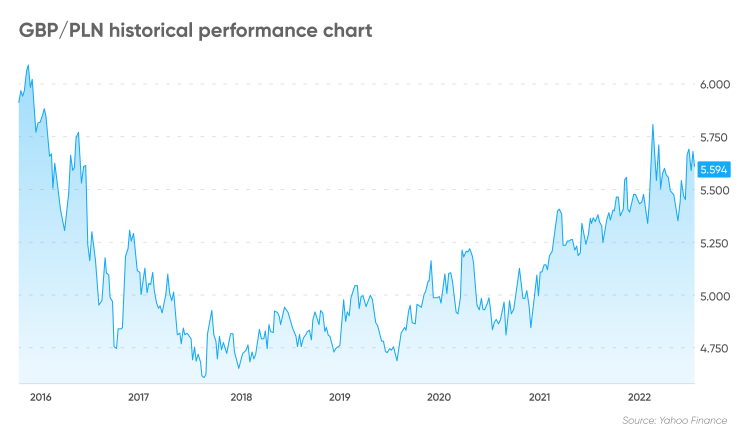 The GBP/PLN rate moved back above 5.00 in February 2019, and reached 5.20 at the start of the Covid-19 pandemic in March 2020. While the rate pulled back to 4.80 in August 2020 as Covid-19 cases climbed in the UK, the rollout of vaccines later in the year and the full reopening of the economy from lockdown restrictions lifted the value of the pound and it has since remained above 5.00 zlotys.

The Russian invasion of Ukraine and subsequent concerns about the impact of sanctions on commodities supply in Europe saw the GBP/PLN rate soar to 6.02 on 7 March. But the pair then pulled back, dropping to 5.46 by the end of March and falling further to 5.35 in early June. The exchange rate turned higher in June and has since moved up to the 5.60-5.70 range.

The BoE began raising interest rates in December 2021 with a 15-basis point hike, followed by four 25-point hikes. On 4 August, the central bank lifted the rate by 50 basis points for the first time since February 1995, bringing the benchmark rate up to 1.75%.

Higher interest rates are typically bullish for a currency, as they offer higher returns for fixed-income investors and increase demand for the currency from overseas. But of concern for traders is the Monetary Policy Committee’s August report, which forecasts the UK economy will enter recession in the fourth quarter of 2022 that will persist until the fourth quarter of 2023. It expects the economy to contract by more than 2% between the third quarter of this year and early 2024.

Meanwhile, in Poland, “the trend of the zloty's depreciation was temporarily halted in mid-July by a better-than-expected reading of Poland's current account balance for June, the maintenance of Poland's credit rating at "A-" by Fitch and an improvement in investment sentiment in Europe due to the restoration of gas supplies to the EU via the NS1 pipeline after being shut down for ten days of maintenance by Russia's Gazprom,” noted Jarosław Kosaty, analyst at Spanish bank Santander.

But Russia subsequently announced further maintenance, raising concerns on the market that it could be part of a strategy to prevent European countries from accumulating gas reserves for the winter, increasing risk aversion and weighing on the value of the zloty, according to Kosaty.

Unlike other central banks around the world that have indicated they will continue raising interest rates as they look to get inflation under control, the Narodowy Bank Polski (NBP) indicated that it will end its interest rate increases.

“The market had hoped that in such circumstances the MPC would raise interest rates by at least 75bp at its July meeting, as it did in June, and given the weakness of the zloty, abandon rhetoric suggesting an imminent end to the rate-hiking cycle. However, contrary to the trends in core markets, the MPC did not abandon its policy of ‘ending rate hikes’ and raised rates by only 50bp, 25bp less than the market consensus expected.”

What do the challenging geopolitical and macroeconomic conditions mean for the value of the British pound against the Polish zloty?

GBP/PLN forecast: Will the zloty depreciate further, or will the pound weaken?

Analysts at Dutch bank ING are cautious on the outlook for sterling in the wake of the MPC’s August report. “The fact that the Bank is stepping up the pace of rate hikes while also forecasting a meaningful recession shows just how worried it is that worker shortages and supply issues could keep inflation elevated even as the economy weakens. In other words, it’s the supply side of the economy – much more so than what’s happening with demand – that will heavily determine when and after how many more hikes the BoE will stop tightening,” the analysts wrote in an FX market commentary on 4 August.

“The BoE’s narrative of further forceful tightening even as the economy heads into recession is a tricky one for growth-sensitive sterling. On the one hand, we think extreme inversion of the UK Gilt curve and a policy rate over 2% in September could actually help sterling from the bond side... Yet a central bank reluctantly tightening rates to address supply side shocks is not particularly positive for sterling.

“Even though the BoE looks set to increase the pace of tightening, the backdrop for Sterling remains negative due to macro and political uncertainty,” according to analysts at CIBC.

But Erste’s Gumanova also sees the potential for external factors to drive CEE currencies including the zloty lower in the short term:

“The June agreement with the EU on unlocking [Poland’s] RRF funds helped, but the proceeds are yet to start flowing in (pending the EU’s final green light). External developments will likely dominate and weigh on local FX in the near term. However, as these subside, the fundamentals point to a gradual appreciation of most of them – especially the koruna and the zloty.

“Geopolitical risks lurk around every corner and the China-Taiwan escalation is certainly not helping the region,” ING analysts noted.

“The approaching end of the rate-hiking cycle signalled by the NBP amid further increases in CPI inflation readings and accelerating rate hikes in core markets, particularly the US, put negative pressure on the zloty,” Santander’s Kosaty wrote.

“We expect the downward pressure on the zloty to persist in the coming months, as:

In the longer term, we expect limited appreciation of the zloty, due to the expected improvement in investment sentiment in Europe and the gradual weakening of the dollar in global markets.”

Where does that leave the British pound to Polish zloty forecast?

Analysts at Denmark-based Danske Bank are bearish in their GBP/PLN forecast for 2022, expecting the exchange rate to weaken from 5.71 in late July to 5.65 in a month and 5.56 in three months’ time. But the pair could then move up to 5.60 in six months and 5.64 in 12 months, the bank’s GBP/PLN prediction shows.

While, at the time of writing, analysis by Trading Economics was a similar GBP/PLN forecast to Danske Bank of 5.67987 for the end of the current quarter, it expected the pair to rise to 5.83520 in a year, based on its global macro models projections and analysts’ expectations.

Analysts have yet to issue a GBP/PLN forecast for 2030.

When consulting forecasts for currencies or any other asset, remember that analysts can and do get their predictions wrong. We recommend you always research and consider the latest market trends and news, technical and fundamental analysis, and expert opinion before making any investment decisions. Keep in mind that past performance is no guarantee of future returns. And never invest money you cannot afford to lose.

Capital.com GBP/PLN Forecast | Will GBP/PLN Go Up or Down?