The euro-dollar exchange rate (EUR/USD) dropped below the parity threshold on Thursday, hitting an intraday low of 0.995, due to growing fears of a one-percentage-point rate hike by the Federal Reserve in July and following Mario Draghi's resignation as Italian prime minister

Moving to Europe, the single currency continues to receive negative political headlines. Despite gaining a vote of confidence in the Senate despite the boycott of the Five Star Movement, Draghi announced his resignation as Italian prime minister due to the coalition's narrow majority.

According to today's US macro figures, the number of Americans filing new jobless claims jumped by 9 thousand to 244 thousand in the week ending July 9th, the most since November 2021, and slightly above market forecasts of 235 thousand, but not enough to decisively invert the dollar's strength.

Chart of the day: EUR/USD broke parity as Draghi resigns 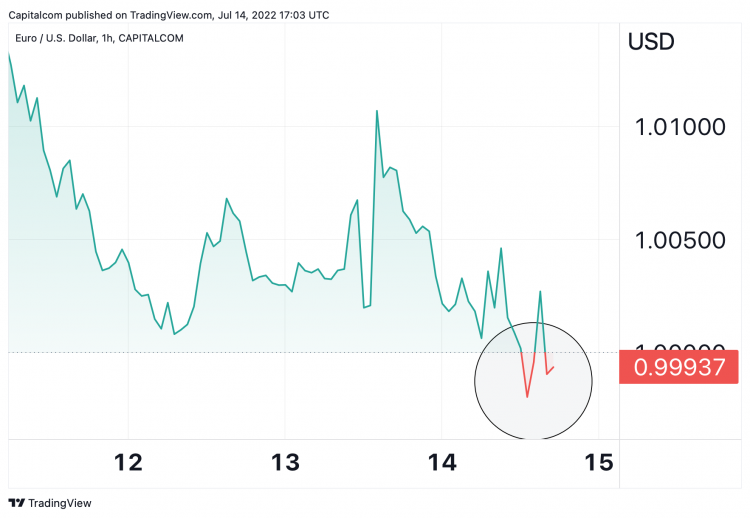 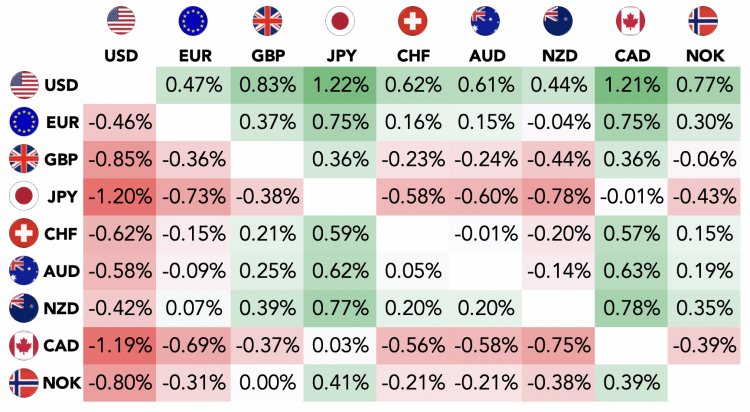 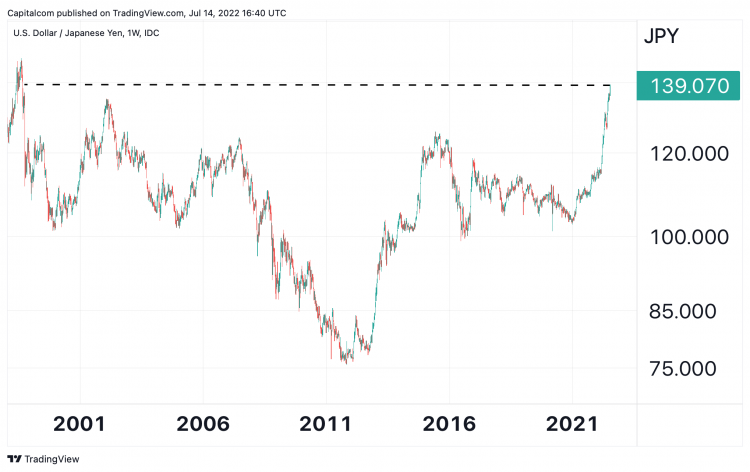 Japanese yen (JPY) trading news: The Japanese yen's depreciation continues unabated, fueled by expectations that the Fed will raise interest rates by one percentage point in July and the Bank of Japan's dovish stance. USD/JPY reached an intraday high of 139.4 before falling down to 139 at the time of writing. It is at its highest since August 1998. As previously said, the prognosis for the USD/JPY pair can only be altered by the development of indisputable indicators of a severe recession in the United States, which might herald a policy shift by the Federal Reserve.

Pound shows no signs of recovery: GBP/USD flirts with 1.18 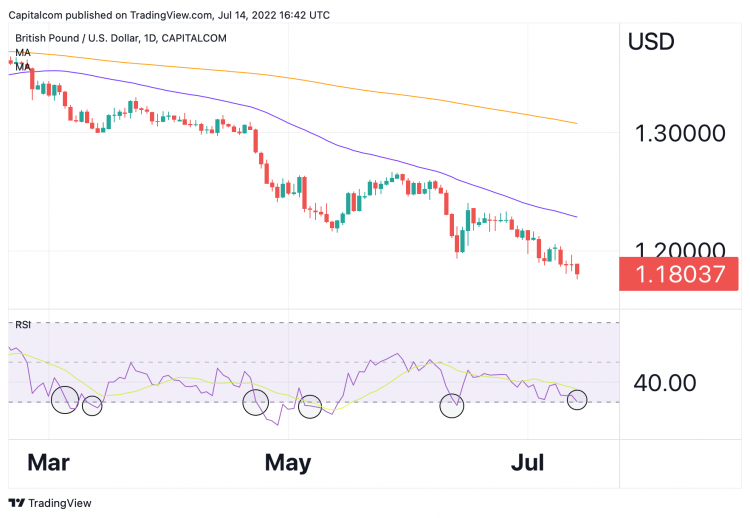 British pound (GBP) trading news: The British pound also had a session in the red today, as bets on a possible 100 bps rate hike by the Federal Reserve pushed the cable (GBP/USD) to an intraday low of 1.178, before slightly rebounding to 1.18. As the fight for Downing Street heats up, investors remain focused on the political environment. The first poll for a new Tory leader was held yesterday, and the second round is being held today, with Rishi Sunak leading. The 14-day RSI is once again approaching oversold territory, but has failed to deliver a significant bullish reversal signal in all other occurrences this year. 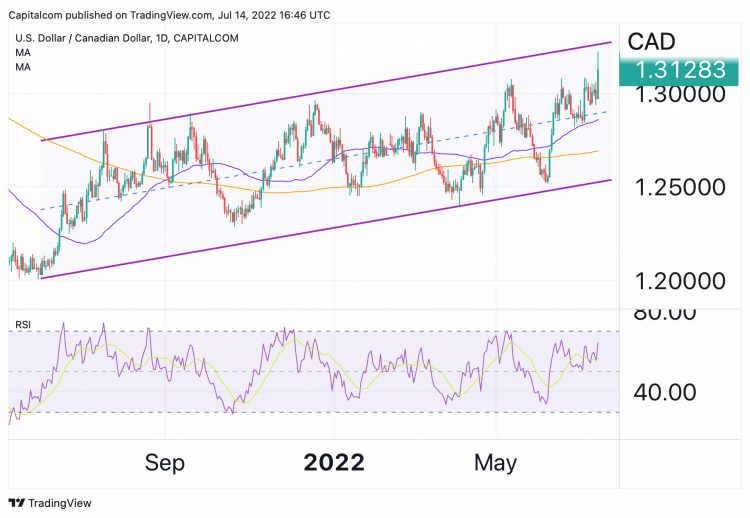 Canadian dollar (CAD) trading news: It is a negative day for the Canadian dollar that falls more than 1% against the dollar, touching an intraday low at 1.32, before returning to 1.31, the lowest level since October 2020, while oil shatters towards 90 dollars a barrel (-3% today) under the growing signs of a recession in the United States. Yesterday, Loonie was the best performer among the G-10 currencies, after the Bank of Canada unexpectedly raised rates by 100 basis points to 2.5%, while the market expected a jump from 75 basis points. The USD/CAD pair continues to remain in the upper bullish channel range effective from May 2021. The 14-day RSI indicator has been travelling above 50 for over a month now.

Can yuan’s growing international standing protect it from shrinking economy? 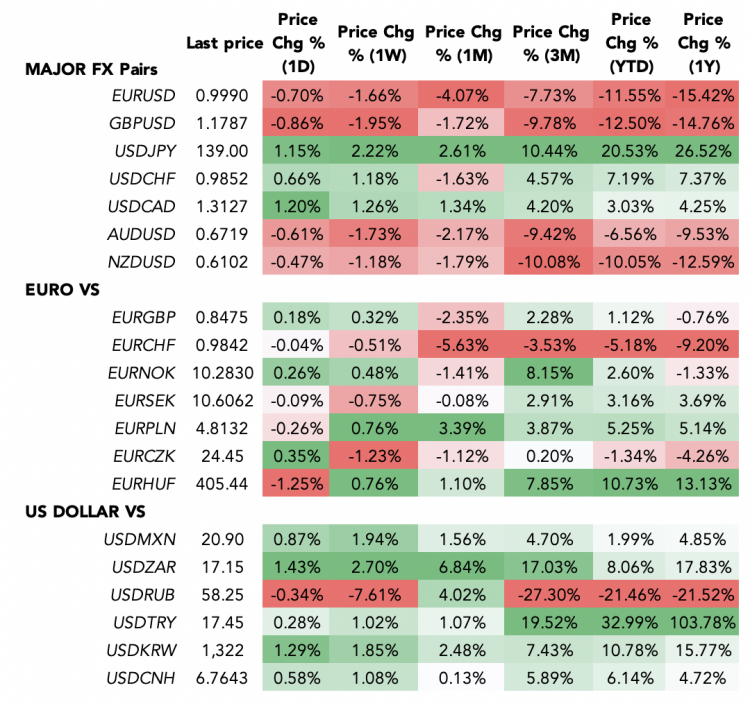