The US dollar/Swiss franc (USD/CHF) exchange rate began the new week on a negative note, falling to 0.963 (-0.8% on the day) as of writing, as haven demand for the franc increased following the Swiss Nationa Bank's surprise rate hike last week and the stock market turmoil, with the S&P 500 (US 500) setting new year-to-date lows last Friday.

Last week, we flagged a double top bearish pattern in USD/CHF, with the pair perhaps reaching 0.955 support. The unexpected half-percentage-point rate hike by the SNB, which along with the Bank of Japan was the only central bank that hadn't said it planned to raise rates until last week, has boosted Swiss franc buy flows. It was the SNB's first rate hike since 2007, after keeping its policy rate at record lows of -0.75% since 2015, in order to prevent high inflation from spreading more broadly to Swiss goods and services.

SNB Governor Thomas Jordan also stated that the franc is no longer overvalued and that the Bank is prepared to intervene in the market to prevent it from falling against the dollar.

Major currency pairs were little moved as the US market is closed today for the Juneteenth holiday.

The US dollar index (DXY) fell to 104.3 (-0.32%), giving back some of the previous session's gains. Despite the fact that several Fed members (Kashkari, Waller, and Bostic) recently expressly endorsed another 0.75 percent hike at the July FOMC, weakening economic growth forecasts have weighed on the greenaback lately.

The Federal Reserve has revised down growth for the current year to 1.7% from 2.8% in March, and dollar bulls have badly digested disappointing retail sales, industrial production, real estate, and the Philadelphia Fed index data last week. The 10-year US yields held at 3.2%, down from 3.5% from a week ago.

The focus now shifts to Fed Governor Jerome Powell's hearing in Congress on Wednesday and Thursday this week.

The dollar slides on rising US recession worries

The French parliament elections took place over the weekend. For the first time since 1997, the elected president did not obtain an absolute majority of seats in the National Assembly. This undoubtedly complicates the legislative process in France and risks feeding political noise in the coming years, as Emmanuel Macron must seek backing from either the far left or far right factions.

The euro (EUR/USD) remained unaffected by the unfavourable political outcome, in part because the US market was closed for the Juneteenth holiday, which kept EUR/USD volumes quite low. In the European morning trading, the EUR/USD pair broke over the 1.05 mark, up by 0.2% on the day.

The Australian (AUD/USD) and New Zealand (NZD) dollars were the best performing major currencies today, both up 0.9 percent against the US dollar.

The Reserve Bank of Australia's Governor, Philippe Lowe, said the board will do all it takes to keep inflation under control, supporting the demand for the Aussie. Hawkish comments boosted investor expectations of faster rate hikes in both Australia and New Zealand, owing to the need to battle inflation and avert a big currency depreciation, such as the one experienced by the Japanese yen.

Meanwhile, Australian bond yields remain high, with the 2-year yield at 3.5 percent and the 10-year yield slightly around 4 percent. The market is now awaiting the release of the minutes from the RBA's June meeting.

The British pound (GBP) began the new week with nationwide strikes by train workers, evoking the social unrest of the 1970s. GBP traders are eagerly awaiting the May inflation data on Wednesday, which is predicted to be the highest in 40 years at 9.1 percent year on year. The sterling remained little moved (+0.1%) at 1.225 against the dollar.

The Japanese yen is also flat today, with USD/JPY stable at 134.9.

The Canadian dollar (CAD) gained ground (+0.2% today), despite additional losses in oil prices with WTI falling below $110 a barrel, as investors anticipated faster interest rate hikes by the Bank of Canada, which is expected to respond to the Fed.

The Norwegian krone (NOK) jumped 1.5%, fueled by fresh gas disruptions between Russia and Europe, which fueled speculation of increased gas imports from Norway. 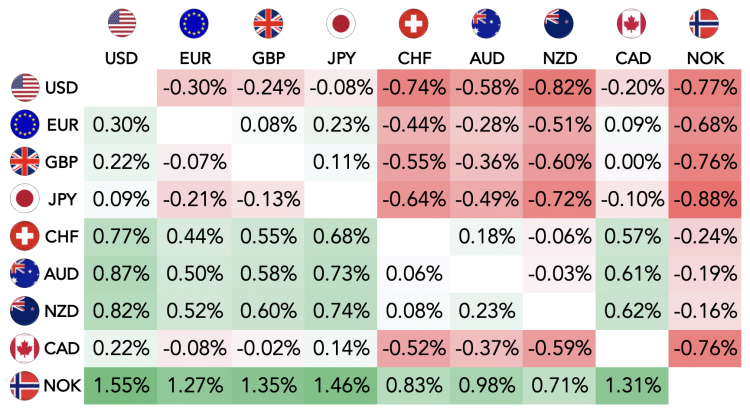 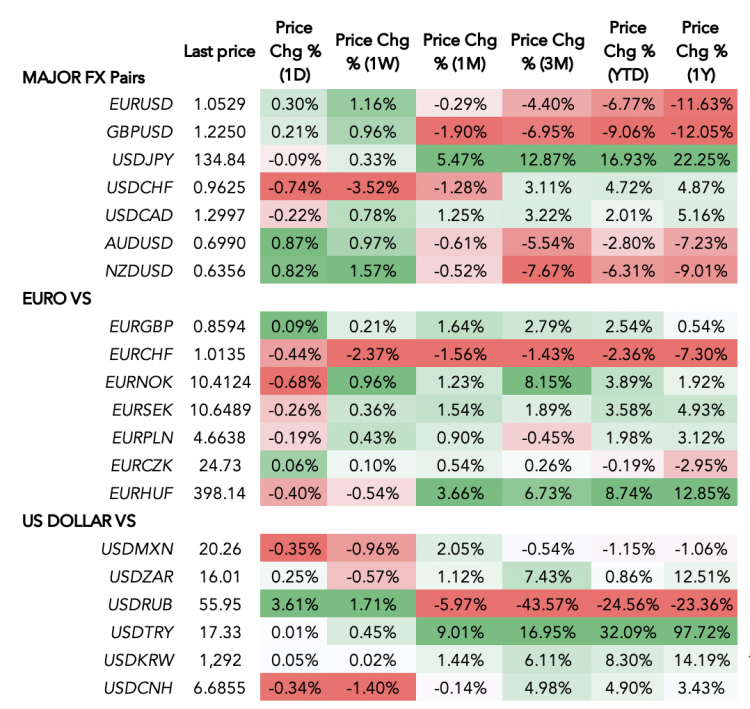