The outbreak of the Ukrainian conflict has resulted in massive demand swings across a wide range of asset classes, including gold and precious metals.

In February, gold saw its greatest monthly rally since May 2021, outperforming the US dollar and the stock market since the beginning of the year, but has trailed behind the broad commodities market.

As the prices of a wide variety of commodities, from wheat to oil, to palladium and natural gas, increase on mounting supply-side disruptions, the risks of the global economy devolving into stagflation get larger.

Economic sanctions imposed by Western nations on Russian banks would further isolate Moscow from the rest of the world, which will have a negative impact on the capacity to conduct commercial and financial transactions with Russia on a global scale.

Meanwhile, inflation, which was already on the increase before the start of the conflict, is expected to be exacerbated by the rise in commodity prices.

What influence will these major economic shocks have on gold in the coming months?

Goldman Sachs has raised its price target for gold to $2,150 per troy ounce in the coming months, citing rising stagflationary risks to the global economy driven by the Ukraine war and commodity inflation.

According to the top US investment bank, the combination of slower economic growth and higher inflation will drive investment demand for the metal. In this sense, gold is perceived as a "fear trade" and a hedge against geopolitical risk.

Changes in the growth dynamics of the United States will be the primary driver to monitor for the bullion performance in the coming months.

Five factors why gold may shine

Western sanctions, such as banning certain Russian banks from the SWIFT international payments system, cause major economic harm to the Russian economy, which risks extending to the country's main trading partners, such as the European Union.

The major danger to the global economy is undoubtedly the detrimental effect of the conflict on consumer and business confidence throughout Europe, as well as the inevitable rise in energy costs as trade ties with Russia deteriorate. As the global outlook darkens, mounting economic uncertainty may prompt investors to seek refuge in safe haven assets such as gold. 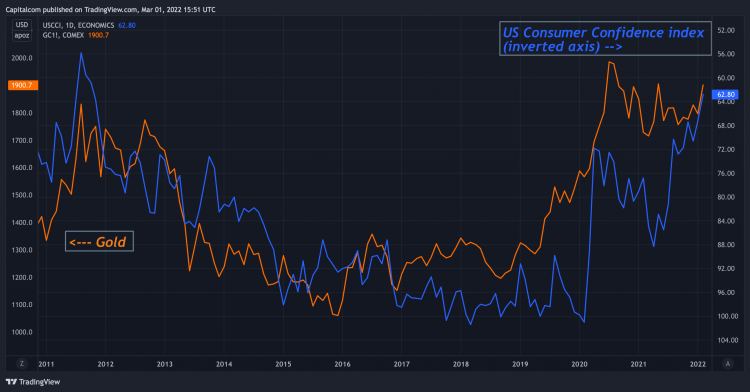 Even before the outbreak of the conflict in Ukraine, inflation continued to rise, surprising analysts’ expectations.

Since the start of the Russian invasion in Ukraine, crude prices have risen past $100 per barrel, natural gas in Europe (the Dutch TTF benchmark) has jumped by more than 60%, and wheat is approaching $10 per bushel.

The spike in commodity prices over the last month has simply added fuel to the flames of inflation.

Still, energy inflation continues to make a significant contribution to overall inflation across the globe. In the Eurozone, the energy index has a 10% weight in the entire consumer basket, which means that for every 10% yearly increase in energy costs, headline inflation in the Eurozone climbs by roughly 1%.

Gold has been traditionally considered as an inflation hedge. Over the last decade, gold price patterns have been strongly tied with the University of Michigan Inflation Expectations Index, which measures the inflation that consumers anticipate over the next 12 months.

Gold has been linked with University of Michigan Consumer Inflation Expectations 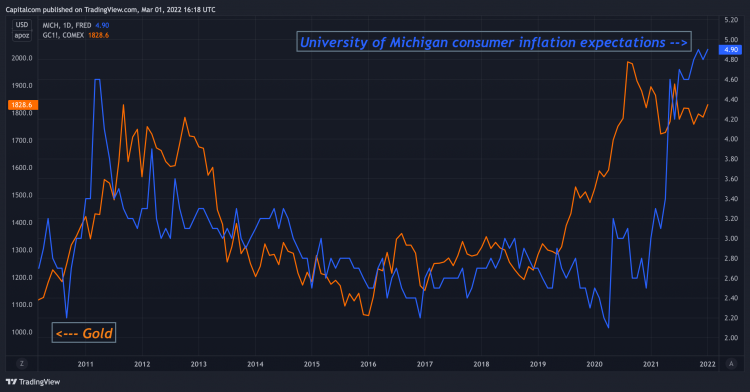 3) Lower for longer real yields: a blessing for gold?

Before the conflict, the market speculated about the possibility of faster interest rate hikes by the Federal Reserve and an early start of the quantitative tightening, i.e. the reduction of assets held by the Fed.

The conflict in Ukraine could now change the outlook for the Federal Reserve's monetary policy. Expectations of a 50-point base hike at the Fed's March meeting have in fact plummeted in recent days, and the market is now pricing in a 0% chance of this event occurring.

We have also seen investors flee to bonds, with the 10-year Treasury rate of return materially falling from 2% levels.

Because market inflation expectations actually rose after the war in Ukraine, as measured by U.S. break-even rate levels, the combination of lower nominal yields and higher inflation expectations resulted in a further decline in U.S. real yields, which historically acted as a brake on rising gold prices, since the metal is a non-yielding asset. 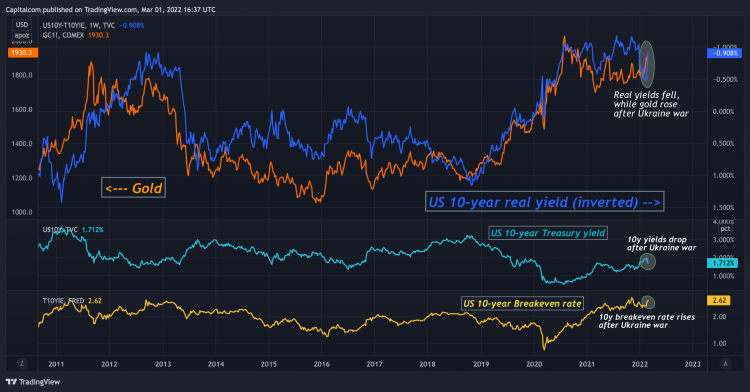 US 10-year real yields fell, while gold prices rose after the outbrake of the war in Ukraine – Credit: Capital.com / Source: Tradingview

In recent weeks, there has been a significant increase in investor interest in safe-haven assets, such as gold.

SPDR Gold Trust (GLD), the world's biggest gold-backed ETF, had net inflows of $3.2 billion, or 5% of its assets under management (AUM), in the first two months of 2022.

In particular, inflows into GLD have surged significantly since the end of January as geopolitical worries between Russia and Ukraine have severely escalated. 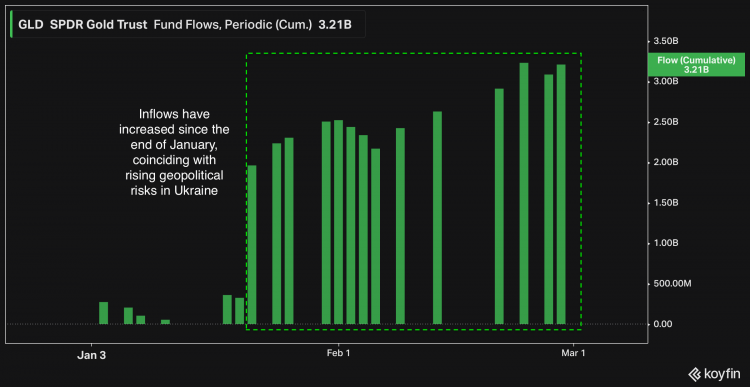 5) Historical precedent of gold during stagflation

During the last major historical episode of stagflation, which occurred at the turn of the 70s and 80s, gold was an asset that shined in terms of performance.

As the gap between inflation and economic growth widened in the United States, a sign of worsening stagflation in the economy, the price of gold skyrocketed.

Between 1976 and 1980, gold increased eightfold, from 100 to about 800 dollars per ounce, while the spread between annual inflation and yearly GDP growth exceeded a double-digit rate. 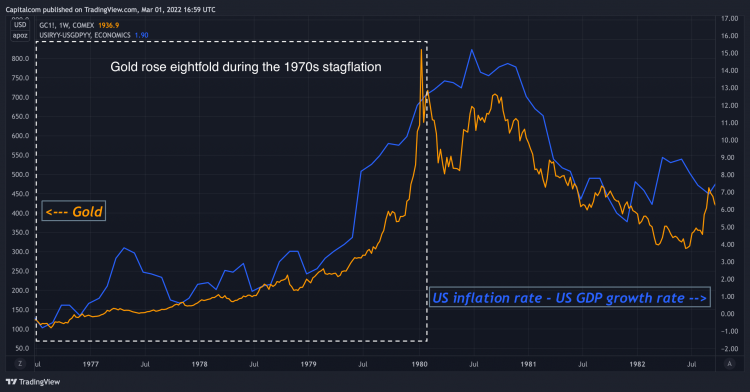 Is the Russian rouble facing a 1998-style crisis?

S&P 500 trails world stocks: Is it time for a paradigm shift?