Eurozone third quarter economic growth jumped to 0.3% compared to previous flash estimates of 0.2% Eurostat reported this morning. The news helped EUR/USD lift to 1.0493 earlier, not quite hitting 1.05; mid-morning the pair was trading lower at 1.0487.

Is eurozone sentiment improving? The yield spread between 10-year German and Italian bonds has narrowed which may encourage policy makers to feel braver.

For now this is the last chance for European Central Bank policy members to give a view before the quiet period kicks in: the ECB’s final 2022 meeting is 15 December and a 0.5% rise is more or less locked down; any last-minute surprise words from ECB personnel won't go down well.

Can the eurozone bloc avoid a full-blown energy crisis this winter – and how will it hit EUR?

While industrial production was up 0.8%, energy-intensive production gaped 3.6% lower month-on-month; in total a 13% fall compared with October 2021.

But pull out the dimming energy intensive bricks and the German economy, says ING, looks impressively robust – for the moment.

“Today’s industrial production data has two messages: German industry, excluding energy-intensive sectors, is more resilient than some pessimists had thought but at the same time, the gradual slide into recession still looks unavoidable.” 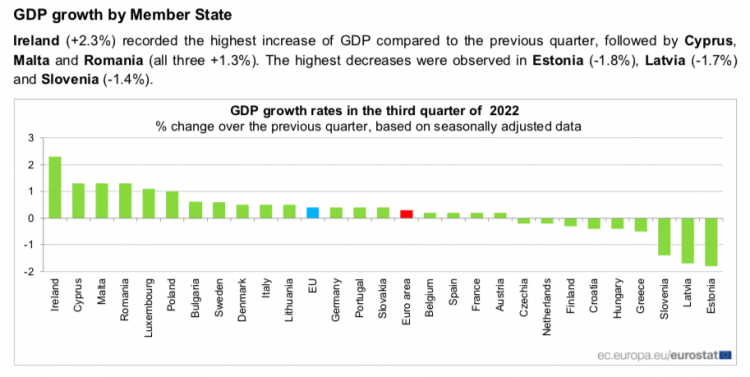 In November Eurozone inflation fell for the first time in 17 months. This carried fresh hope that the worst of the biggest global price surge for decades was done, easing pressure on central banks. But the lower 10% figure remains a massive multiple of the ECB 2% target and the news was much less impressive on the core inflation front, static at 5%.

Foley feels, still, there’s unlikely to be a Fed pivot to lower rates before 2024.

Where does this leave Europe’s biggest economy? ING analyst Carsten Brzeski says the question is whether the Germans can avoid a double skid in the winter of 2023/24.

“Currently, many official forecasts expect the German economy to return to average quarterly growth rates by mid-2023. We are more cautious and think that the series of structural changes and adjustments will keep the recovery subdued, with a high risk of a double dip.”