While the US and eurozone both enjoy strong and stable currencies, the US dollar is well known for its safe-haven dynamics as the global reserve currency. The dollar moves opposite to the market risk sentiment, surging when it’s off and falling when it’s on.

Both the US and the eurozone made it to the world’s three biggest economies list, with Europe falling behind the US and China. The EUR/USD pair falls into the ‘majors’ category of the FX market and was the world’s most-traded forex currency pair in 2020 by share of total trades, according to Statista.

Where is EUR/USD now?

The European currency remains weak against its US rival, declining 4.46% year-to-date and struggling to gain momentum. The pair reached the year peak at 1.23495 on 6 January, followed by a series of lower highs and lower lows, leading EUR/USD into the first dip of 1.17041 on 31 March.

The pair partially recovered losses, before plunging 2.18% to another dip of 1.18471 in just three days following the US Federal Reserve meeting on 15 June, which gave a boost to the greenback. Since then, EUR/USD has been declining further, currently trading at 1.17383, the lowest level since April.

The key factors at play in the EUR/USD pair price action are the moves from the US Federal Reserve and the European Central Bank (ECB), and how the two central banks are shaping the monetary policy. As the global pandemic hit world economies, both central banks tightened policy by cutting interest rates to record-low levels and boosting bond-buying programmes to unprecedented amounts.

Yet as inflation is surging in the US, reaching a 13-year high of 5.4% in both June and July, an interest rate hike may come sooner than expected. In June this year, the US Fed’s dot plot revealed that more members now favour an interest rate hike by 2023 than was previously anticipated, which pushed the US dollar index 1.96% higher in just three days following the announcement.

Apart from an interest rate hike, there is growing anticipation about when the Fed will start to taper off its $120bn bond-buying programme. Recently published minutes from the Fed’s July meeting revealed that the US central bank may start to wind down its monetary support as soon as this year.

Not all members are on board with the policy tightening, however. Some would prefer to slow down the asset purchasing “early next year”, amid concerns about the job market, which is still short of its pre-pandemic levels, and the fast-spreading Delta variant that could “damp the economic recovery”.

The tapering of the monetary stimulus may spark a risk-off sentiment in the markets, as optimism is likely to be partially boosted by the Fed’s support. In theory, the risk-off sentiment would give the greenback a push up, because the currency is serving as a safe haven during market downturns, which in turn would push EUR/USD lower.

Following the Fed’s minutes release, the dollar index surged to 93.729, the highest level since November last year. Delta variant woes may be another factor playing into the dollar’s strength, because they are boosting the risk-off sentiment, helping the USD consolidate around the current year’s top.

On the other side of the Atlantic, the European Central Bank has been a lot more dovish. In July, the bank upgraded its policy guidance, stating that no interest rate hike would be expected until the 2% inflation target is achieved for a prolonged length of time.

This is a change from the previous stance whereby a rate increase would be possible if the ECB saw “inflation outlook robustly converted to a level sufficiently close to but below 2% within its projection horizon”. Earlier in the month, the bank also revealed its new strategy review, revising the inflation target from “below but close to 2%” to “symmetric to 2%” – the first strategy change in almost two decades.

During the press conference following the meeting, Christiane Lagarde stressed that September’s forecasts could be more indicative of the outlook. As happened with its US peer, the ECB expressed concerns about the Delta variant, highlighting the uncertainty it’s bringing.

The EUR/USD reaction to the ECB meeting was limited, with the currency pair falling 0.17% on the day.

The ECB’s dovishness sets it apart from the Fed and puts the European currency in an unfavourable position against its US rival, according to Ben Carter, global capital markets analyst at Validus Risk Management.

“With lots of talk around the Fed beginning to taper its purchases before year-end, the euro may struggle to gain any ground against the US dollar over the next few months as Lagarde comments that inflation has picked up but remains subdued,” Carter told Capital.com.

Yet some analysts have positive EUR/USD predictions and foresee a bullish price action in the pair for the coming months, despite the US dollar’s strength across the board, which might keep the EUR/USD upwards move limited in the short term.

On 19 August, analysts at Rabobank highlighted that there are multiple factors sparking risk-off sentiment, helping to boost the USD further. “In the G10 space, much of this has been linked with Fed tapering fears,” Rabobank’s Jane Foley said in a note to clients.

“However, we would argue that there are other factors also in play. Underpinning the fall in risk appetite are concerns about the Delta variant and potentially also uncertainties about the implications of the news from Afghanistan,” Foley added.

Her EUR/USD forecast on a three- to six-month perspective remains at 1.1600.

In a note to clients on 18 August, the global FX research team at JP Morgan lowered its EUR/USD forecasts “on clearer prospects for monetary policy divergence by 1 cent across the horizon”. The new target for the pair is 1.15 by mid-2022.

Note that analysts’ predictions are often wrong. You should always conduct your own research before making any investment or trading decision. 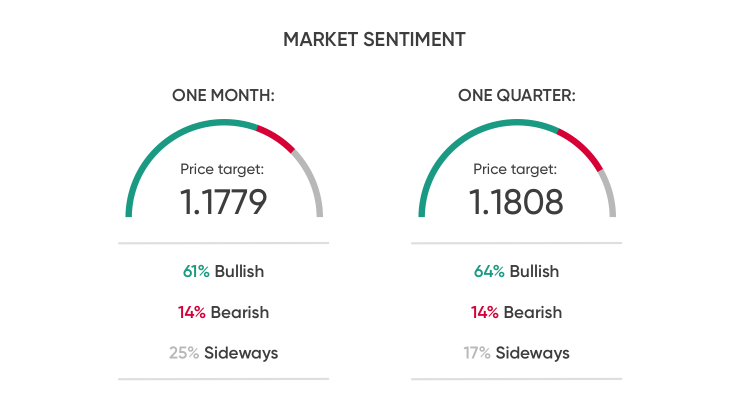 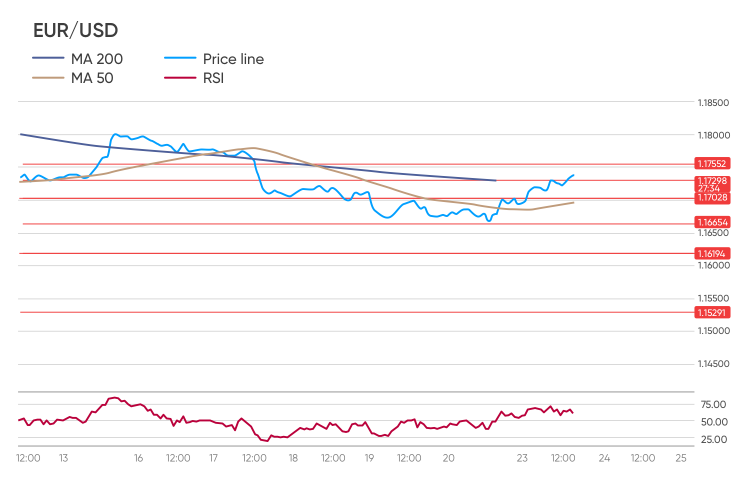 USD/RUB forecast: Will the Russian ruble continue its outperformance against the dollar?