Platinum prices have been steadily creeping up this month, to see a gain of almost 10% since the start of September. At the time of writing, platinum was trading at approximately $895 per troy ounce, following a surge in renewable hydrogen and platinum jewellery demand.

Platinum is used in renewable hydrogen catalysers, which drives a major chunk of demand for the precious metal. Not only that, but a number of Chinese companies have also recently received permission to set up a metals hub in Zimbabwe, which is the third largest producer of platinum worldwide.

Why has platinum risen almost 10% this month?

Platinum demand coming from North America is expected to reach new highs this year, soaring as much as 292,000 troy ounces, according to this recent report by the World Platinum Investment Council. This has gone a long way in making platinum even more attractive to investors at the moment, both platinum bullion as well as platinum jewellery.

According to this report by Heraeus Precious Metals, although platinum jewellery demand in China has been a little disappointing this year due to repeated COVID-19 restrictions, as well as fewer marriage registries, India and North America have seen greater demand. India’s platinum jewellery demand could very be positioned to bounce back to pre-pandemic levels, already done better than Q2’19. US jewellery sales have also surged about 16.2% year-on-year.

Furthermore, Zimbabwe has given a number of Chinese firms permission to set up a battery metals hub, which will deal with platinum, nickel and lithium processing amongst others. This hub will be designed by Pacific Goal Investment and Hong Kong Eagle International and will be worth approximately $2.83 billion.

This move has been made to mostly revive Zimbabwe’s declining economy, which has been hit by hyperinflation for several years now, as well as falling tourism due to COVID-19 and political strife.

However, this will also go a long way in helping to support platinum prices, driving a lot of demand for the precious metal. It may also contribute to continuing tightness in the platinum market, by siphoning away a lot of Zimbabwe’s own platinum resources.

As Russian metals are still mostly out of commission in world markets, investors may have to turn towards other major platinum producers such as South Africa in order to get adequate supplies of PGMs. However, this may still be some time away, as the Zimbabwean plant is not due to be completed until 2025, until when the PGM market may have balanced itself out further.

At the time of writing, platinum was trading at approximately $895 per troy ounce. The precious metal saw its last death cross, with the 50-day moving average crossing below the 200-day moving average on the 9th May, indicating that platinum prices had moved into a downtrend.

Coming to the Fibonacci retracement analysis, platinum has recently been attempting to break the 23.6% retracement levle (2022 high-low), which means that the next resistance level is now around the 38.2% level, which is also near the August highs.

However, to decisively reverse the bearish trend, platinum has to overcome the key 50% Fibonacci level, which is placed exactly at $1,000 per troy ounce. This also happens to be a crucial psychological barrier. 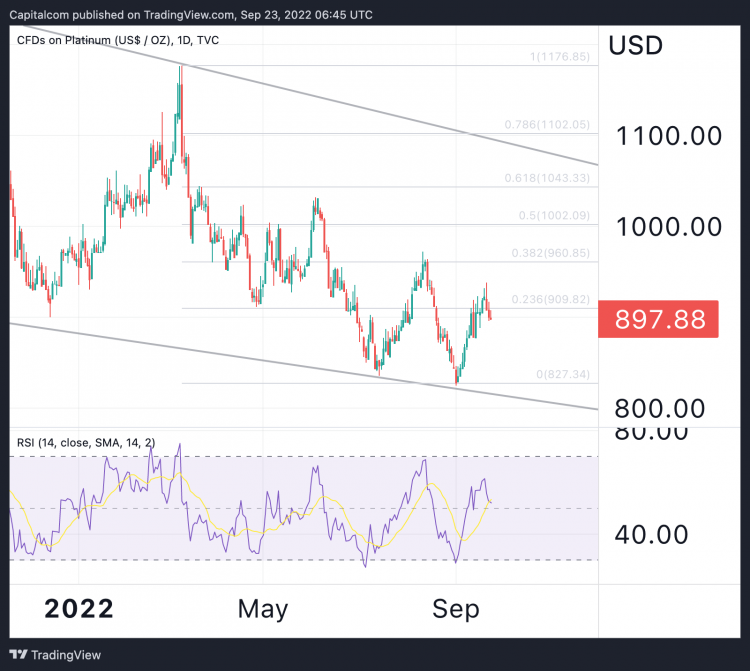 What is the outlook for platinum for the rest of 2022?

The World Platinum Investment Council had highlighted in its first quarter 2022 report that it expected platinum supply to be about 5% less for the rest of 2022, while demand would be about 2% higher. This is despite issues faced by the precious metal earlier in the year, which had caused some temporary surpluses as markets reeled from the Russia-Ukraine war.

In its second quarter report, the WPIC continues to highlight that “ The second quarter was characterised by significant concerns around slowing economic growth combined with inflation, compounded by ongoing geopolitical tensions and continued supply chain disruptions.

Despite the economic and supply chain challenges, demand for platinum from automotive, jewellery and industrial end uses remained robust, with ongoing tightness in the platinum market illustrated by continued elevated lease rates, which were accentuated by ongoing high levels of excess imports into China.”

As the Russia-Ukraine war escalates again, driven by Putin’s partial mobilization of about 300,000 civilians into the military, it is likely that the platinum market will continue ton remain considerably tight for the foreseeable future as well, since Russia is the second largest producer of the precious metal. However platinum prices may also face a little pressure from rising US Federal Reserve and other central bank rates, to combat inflation.

Can gold regain its lustre as Indian wedding season ramps up jewellery demand?