Both copper and iron ore prices showed significant gains lately, as investors keep a close eye on China reopening developments, which are crucial to both industrial metals. China consumes about 52% of the world’s copper, making it the world's largest consumer of brown metal. China is also the largest consumer of iron ore globally, with it importing about 80% of the iron ore it uses, mostly from Brazil and Australia.

Copper, although slightly down on Friday, was still up about 5.4% this week, with a monthly gain of about 11.6%. At the time of writing, copper was trading at about $3.8 per pound.

Iron ore has had a more pronounce upswing, with a weekly gain of about 6.1% and a monthly jump of more than 28%. At the time of writing, iron ore was trading at about CNY 724 per tonne. This was mostly due to China already having eased some of its zero-COVID-19 restrictions in some areas following increasingly violent protests.

Iron ore prices were up about 6.1% this week 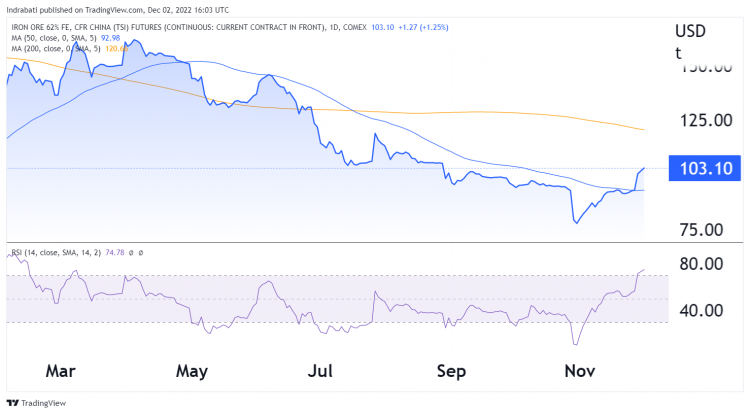 Iron ore prices have increased over 6% this week – Credit: TradingView

How have easing China restrictions impacted copper and iron ore?

China has recently been easing its rigid zero-COVID-19 restrictions, following mass protests across the country, sparked by a high-rise building fire in Urumqi, which led to the deaths of 10 people. This has led to widespread outrage, with citizens blaming ongoing restrictions for the delay in emergency services.

The Chinese government has responded by loosening zero-COVID restrictions in Urumqi, as well as several districts in Guangzhou and Shanghai. Furthermore, in some localities of Beijing, COVID-19 patients with relatively mild cases of the virus have been allowed to self-isolate at home, as opposed to in the hospital, or whole buildings and localities cordoned off earlier.

This has also been supported by the fact that top pandemic officials are highlighting that the Omicron strain of virus has been losing strength, through herd immunity improving significantly, as well as more people getting vaccinated. Although cases are still quite high, they are less severe than before, with fewer deaths than in countries such as the UK and the US.

This has led to widespread speculations that China may now be willing to turn away from its rigid zero-COVID policy and perhaps end mass lockdowns altogether. This is also due to the fact that so far, China’s policy of introducing mass lockdowns whenever cases rise has not been working very well, leading to a delay in herd immunity as well as hitting the economy very hard.

To counter these effects and revive the economy, the Chinese government has already issued a slew of stimulus measures, which are focusing heavily on the infrastructure and real estate sector, amongst others. This is going a long way in boosting copper and iron ore prices, which are heavily reliant on these sectors.

The People’s Bank of China (PBoC) has also recently reduced the reserve requirement ratio for banks, in an attempt to increase liquidity in the market. For the same goal, in November, it also infused the economy with about CNY 850 billion, in the form of medium-term loans, in order to help combat the bond weakness seen a couple of weeks back, when Chinese government bonds had their biggest sell-off in about 6 years.

At the time of writing, iron ore prices were trading at about CNY 724, which was about 36% down from the record highs seen earlier this year in April. However, the metal was still up about 33% from the record lows seen at the end of October.

Since November 25, iron ore prices have also crossed above the 50-day moving average, indicating the start of an upswing, but are still about 17% down from the 200-day moving average. Since November 28, the relative strength index for iron ore has also crossed above 70, which indicates overbought levels and could signal the start of a trend reversal.

Copper prices were up about 17.8% from mid-July lows 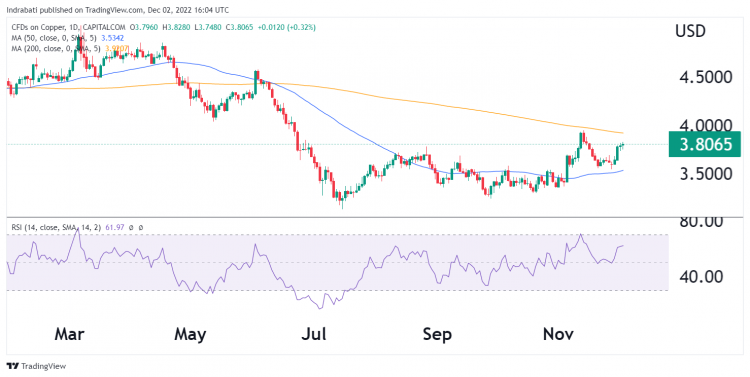 What is the outlook for iron ore and copper?

Investors are keeping a close eye on any new Chinese developments regarding further relaxations of COVID-19 restrictions, as these are likely to help support iron ore and copper prices further. Further stimulus measures by the Chinese government, if any, will also do the same.

Furthermore, a strong US non-farm payroll data for November may also prove to be negative for metals in the coming days, as the US Federal Reserve may decide to put unemployment concerns on the backburner, instead focusing solely on controlling inflation. This may lead to more aggressive rate hikes in the coming months, which may subdue metal prices somewhat.

EUR/USD 1.09012
Trade
+0.300%
USD/JPY 130.049
Trade
+0.180%
GBP/USD 1.23925
Trade
-0.010%
AUD/USD 0.70811
Trade
-0.400%
GBP/JPY 161.160
Trade
+0.140%
The difference between trading assets and CFDs
The main difference between CFD trading and trading assets, such as commodities and stocks, is that you don’t own the underlying asset when you trade on a CFD.
You can still benefit if the market moves in your favour, or make a loss if it moves against you. However, with traditional trading you enter a contract to exchange the legal ownership of the individual shares or the commodities for money, and you own this until you sell it again.
CFDs are leveraged products, which means that you only need to deposit a percentage of the full value of the CFD trade in order to open a position. But with traditional trading, you buy the assets for the full amount. In the UK, there is no stamp duty on CFD trading, but there is when you buy stocks, for example.
CFDs attract overnight costs to hold the trades (unless you use 1-1 leverage), which makes them more suited to short-term trading opportunities. Stocks and commodities are more normally bought and held for longer. You might also pay a broker commission or fees when buying and selling assets direct and you’d need somewhere to store them safely.
Capital Com is an execution-only service provider. The material provided on this website is for information purposes only and should not be understood as an investment advice. Any opinion that may be provided on this page does not constitute a recommendation by Capital Com or its agents. We do not make any representations or warranty on the accuracy or completeness of the information that is provided on this page. If you rely on the information on this page then you do so entirely on your own risk.