Canadian dollar has mostly kept pace with the greenback – for how much longer?

Oil not so essential

Canadian petrodollar: What is the outlook for USD/CAD as oil prices ease?

OPEC+ has also just agreed to open up the taps but supplies remain super-tight and an extra 100,000 daily barrels doesn’t really touch the supply/demand sides, particularly for President Joe Biden, desperate for an inflation breather for hard-pressed Americans.

Saudi Arabia, while wanting better relations with the US, doesn’t want to oppose Putin or pump up production, risking Russia’s leverage on prices.

Yet while the loonie has been one of the best performing currencies this year, relative to its peers, USD/CAD – flat this morning at 1.2841 – has diced somewhat lower as oil prices have surged. How to explain?

Canadian dollar has mostly kept pace with the greenback – for how much longer?

Oil not so essential

Viraj Patel at Vanda Research says petro currencies haven’t been as tightly pinned to the oil price given the supply and demand gyrations driving crude markets. “That being said, lower oil prices don’t help – and CAD is slightly more sensitive than the Norwegian krona (NOK) to this story.”

G10 currencies are driven also by wider risk sentiment plus local growth and policy nuance. “I suspect getting the direction of US equities right probably matters more when forming a view on USD/CAD,” he adds.

Citi has called oil down to $45 by the end of 2023 and the higher prices are eating hard into alternatives. Recession risk is rising. While Prime minister Justin Trudeau is popular abroad he is not so well-liked at home, even if some Canadians feel a connection to the family brand.

“In the past three weeks, the Loonie (USD/CAD) has been trading in a tight, choppy range between 1.278 and 1.294 from a technical standpoint.”

Even though USD/CAD’s ascendancy has been in place for more than a year, indicating a still-bullish trend, the short-term momentum is shifting towards the Canadian currency believes Cingari.

And while a more hawkish Federal Reserve is a risk, the loonie looks robustly shielded thanks to an equally hawkish Bank of Canada. 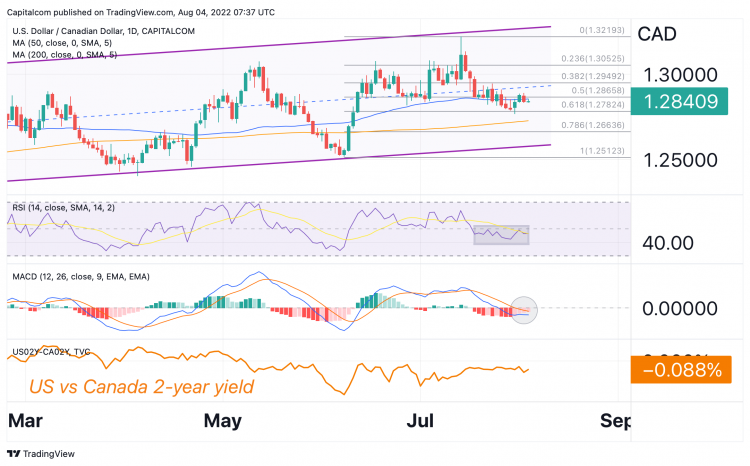 The longer-term outlook is harder to know. Europe remains weaned on Russian energy, interest rates are going up everywhere and China-Taiwan tension is flaring. Oil could still remain higher for longer, despite recession risks, though if recession subsides and both the Fed and the Bank of Canada ease off on rate hike cycles then the Canadian dollar may get a boost.

Canada's economy grew 4.6% in the second quarter in contrast to the US second quarter contraction, recent numbers show. Canadian balance of trade numbers for June arrive later today and an employment numbers update arrives tomorrow. It's expected that the Bank of Canada will raise rates by 0.50% next month to 3%.

Currency wars: Yen battles back, but can rally survive US jobs data?

Capital.com Canadian petrodollar: What is the outlook for USD/CAD as oil prices ease?