The Bank of Canada (BoC) has continued its fast pace monetary tightening cycle by raising its policy rate to 3.25% in September.

The recent pace of rate increases has slowed after the jumbo 100 basis point (bp) hike in July as high interest rates have continued to hit the economy.

Canada’s national currency, the Canadian dollar (CAD), has declined against its American counterpart, the US dollar (USD), with the USD/CAD currency pair trading around the 1.37 mark, as of 5 October, according to data from Investing.com.

Slowing economic growth and the BoC’s policy of monetary contraction appear to be increasing the risk of Canada’s recession.

At the same time, the latest August reading showed that the country’s unemployment rate rose for the first time in seven months, providing relief to the tight labour market.

What is the Bank of Canada?

Founded in 1934, the Bank of Canada (BoC) is Canada’s central bank.

The primary responsibility of the Bank of Canada, like that of many other central banks worldwide, is to keep inflation at the 2% target inside the control range of between 1% and 3%. It does this through the use of monetary policy tools, such as interest rates.

The Bank of Canada’s Governing Council adjusts its key interest rates eight times a year on fixed announcement dates. The council makes policy decisions by consensus, in contrast to some other central banks, which use individual votes to determine rates.

The Bank’s other duties include overseeing the design, printing, and distribution of Canadian banknotes. As the fiscal agent of the Government of Canada, it also oversees the public debt programs and foreign exchange reserves.

The bank left its key rate unchanged at 0.25% throughout 2021 despite inflation having accelerated from the second half of the year.

In 2021, Canada's economy rose 4.6% after a 5.2% increase in 2020 as activity picked up  in line with easing Covid-19 restrictions and rising vaccination rates, according to Statistics Canada.

The country’s annual Consumer Price Index (CPI) rose 3.4% in 2021, the fastest pace since 1991, according to the country’s official statistics body. In 2020, Canada’s annual CPI inflation increased 0.7%.

BoC was concerned about the adverse impact of the devastating floods in British Columbia and uncertainties from the Covid-19 Omicron variant on Canada's economic growth.

“The Governing Council judges that in view of ongoing excess capacity, the economy continues to require considerable monetary policy support,” the BoC said in a policy rate meeting on 7 December 2021.

On 2 March 2022, the BoC raised its overnight target rate by 25 bps to 0.50% as the inflation rate hit 5.1% in January – well above the Bank’s target range. The BoC attributed the rising inflation rate to Russia's invasion of Ukraine at the end of February, which boosted energy and food-related commodities prices.

Canada’s interest rate has been raised five times since March 2022, according to BoC data.

The Bank’s latest interest rate decision came on on 7 September, when the Canadian interest rate was lifted by 75bp to 3.25% – a smaller hike after a supersized 100bp hike that shocked markets in July.

Easing annual inflation – though core inflation remains high – and slowing economic growth have prompted the BoC to slow the pace of its interest rate hikes.

On 29 September, Statistics Canada reported that the national economy grew by 0.1% in July – a number similar to the one observed in June.

In Q2 2022, Canada’s gross domestic product (GDP) grew by 3.3% on an annualised basis, up from 3.1% in the first quarter, Statistics Canada reported.

The slowing economy has changed BoC’s tone into a more dovish one, though it defended the need to raise the policy rate further given the inflation outlook.

“Quantitative tightening is complementing increases in the policy rate. As the effects of tighter monetary policy work through the economy, we will be assessing how much higher interest rates need to go to return inflation to target,” the BoC said in the statement on 7 September.

David Doyle, head of economics at Macquarie Group, told BNN Bloomberg that Canada will enter recession in the first quarter of 2023. Doyle forecast Canada’s GDP to contract by 3% along with a 5% drop in the unemployment rate.

"We actually think it [a recession] will be pretty severe in Canada," Doyle said.

TD Economics said on its 7 September report that the odds of recession tilted to above 50% if BoC waited to see inflation nearing the 2% target before pausing the rate hike.

In recent Canada recession news, Statistics Canada reported on 9 September that the country’s unemployment rate rose for the first time in seven months, growing by 0.5% in August to 5.4%. It rose from a record low of 4.9% in June and July.

The adjusted unemployment rate, which includes people who wanted a job but did not look for one, climbed 0.5% to 7.3% in August.

TD Economics was of the view that Canada’s unemployment rate in August was back to a more sustainable level.

“We'd argue that a slowing labour market is what is needed to ensure that this high inflation environment does not become entrenched. The labour market is coming from levels of extreme tightness and has been due for some giveback. This is exactly what is currently playing out.”

The Canadian dollar has been weakening against the US dollar due to the hawkish monetary tightening policy of the US Federal Reserve (Fed), volatile oil prices, along with the BoC’s pace of interest rate rises.

The US dollar has gained 7.7% in a year against the Canadian dollar (USD/CAD), hitting 1.368 on 5 October, according to data aggregator TradingEconomics. The currency pair was forecast to rise to 1.399 by the end of this quarter and to 1.45 in one year, the economic data provider estimated. 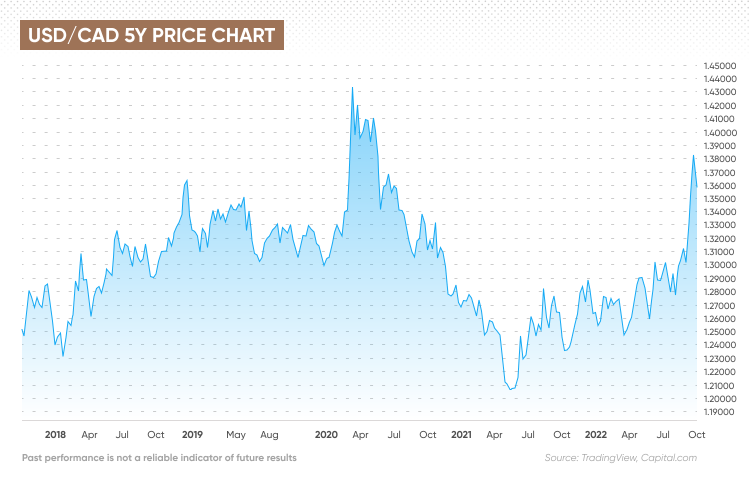 “The increases in our targets for Fed tightening suggest an even softer loonie by year end. But come 2023, we expect that a somewhat earlier-than-expected end to the Fed tightening cycle will take a bit of steam out of the US dollar, and allow the Canadian dollar to be marginally stronger as the year progresses, even with commodity prices tamed by the global slowdown.”

Canada interest outlook: 2022 target and beyond

Will the Bank of Canada hit the brakes on interest rate hike to avoid recession?

“With the economy in need of tightening, the Bank of Canada is set to continue raising rates at an aggressive pace, such that the policy rate reaches a peak of 4.0% in 2022,” TD Bank’s James Orlando and Senior Economist Thomas Feltmate wrote in a long-term forecast dated 27 September.

Orlando and Feltmate predicted that the BoC will cut Canada’s interest rate back to its neutral level starting at the end of 2023. TB Bank’s interest rate forecast had the BoC’s policy rate falling to 1.75% by the end 2024.

Analysts in this article forecast the BoC’s overnight rate to peak by December 2022 before the Bank considers lowering it.

Remember that analyst predictions and opinions can be wrong. Forecasts should not be used in place of your own research.

Always conduct your own due diligence before trading or investing. And never invest or trade money that you cannot afford to lose.