Australia’s consumer sentiment fell to historic lows in August 2022, seen only during periods of major disruption, like the Covid-19 pandemic and the global financial crisis of 2008.

Inflation and rising interest rates have become major concerns for households that have seen their expenses soar in 2022. While the latest monthly consumer confidence report for September indicated a small rebound in optimism, economists still remain concerned as central banks are expected to continue hiking rates till the end of the year.

What is consumer sentiment?

Consumer sentiment is an economic indicator that looks to measure the overall health of a nation’s economy. It shows how optimistic consumers are about the future.

The Consumer Confidence Index (CCI) is a commonly used measure of consumer sentiment globally, while the Michigan Consumer Sentiment Index (MCSI) is also used in the US.

According to the Organisation for Economic Co-operation and Development (OECD), the CCI provides an indication of future developments of households’ consumption and saving, based upon answers regarding their expected financial situation, their sentiment about the general economic situation, unemployment and capability of savings.

A CCI above 100 signals a boost in consumer confidence, where consumers are more inclined to spend money on major purchases than save in the next 12 months, said the OECD.

CCI values below 100 indicate a pessimistic attitude towards future developments in the economy, possibly resulting in a tendency to save more and consume less.

As consumer spending makes up a majority part of gross domestic product (GDP) in several countries, consumer sentiment is seen as an important barometer that influences economic policies.

Data compiled by TradingEconomics showed that the Westpac-Melbourne Institute Index of Consumer Sentiment for Australia fell to multi-decade lows in the first half of 2020 during the peak of the Covid-19 pandemic.

Widespread lockdowns and uncertainties over the timeline of vaccines had pushed consumer confidence to historic lows during the time.

Consumer sentiment rose and fell in 2020 as Covid-19 and city lockdowns reduced growing optimism over the economy’s health.

The Westpac-Melbourne Institute Index of Consumer Sentiment ended 2021 at 104.3 points for the month of December, having eased from 105.3 points recorded in the previous month, with inflation concerns attracting more of the public’s attention. 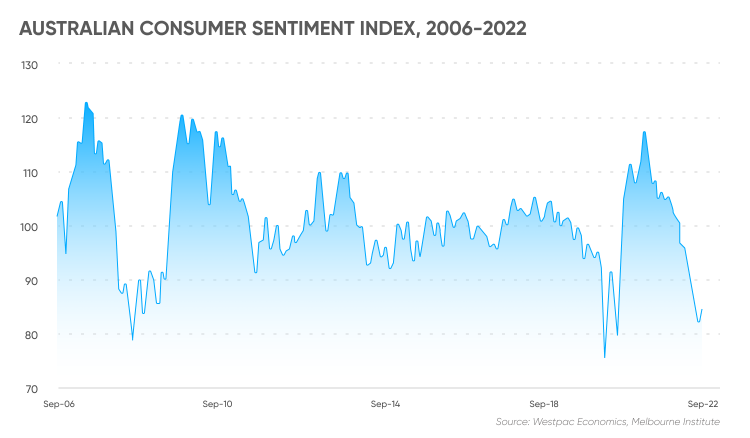 “We found a sharp increase in awareness of inflation. In December 2020 only 5% of respondents recalled any news on inflation. This has lifted to 21%, exceeded only by news on employment and economic conditions,” said Westpac in its December 2021 report.

In 2022, Australia’s consumer sentiment index saw nine consecutive months of decline between November 2021 and August 2022. The index remained in negative territory for most of 2022.

How is the current consumer confidence trending in Australia? For the month of September 2022, the Westpac Melbourne Institute Index of Consumer Sentiment came in at 84.4 points.

Consumer confidence in Australia: Inflation is the main concern

Inflation in Australia has risen to a high not seen since the early 1990s.

Raging price increases have prompted Australia’s central bank, the Reserve Bank of Australia (RBA), to implement an aggressive monetary tightening policy that has seen interest rates rise from 0.1% at the start of the 2022 to 2.35%, as of 21 September 2022.

With interest rate hikes expected to rise further in the last quarter of 2022, consumers fear that the ultra-hawkish stance of global central banks will lead to recessions and job losses across the world.

Australia’s consumer sentiment fell for the ninth straight month in August 2022. The Westpac Melbourne Institute Index of Consumer Sentiment came in at 81.2 points in August.

The index value was around levels that had only been seen during periods of major disruption in the Australian economy including the Covid-19 pandemic and the global financial crisis of 2008, said Westpac.

Unsurprisingly, inflation was the main driver of weakening consumer sentiment.

Inflation data has trended significantly above the RBA’s target band of 2% to 3%. Economists expect the RBA to extend its rate hike cycle at least till the end of the year.

Homeowners are particularly concerned. The 225 basis points (bps) interest rate hike undertaken by the RBA since May 2022 to quell inflation has added to mortgage payment costs.

“For example, with the 225 basis point increase in the mortgage interest rate – from average mortgage rates prior to May – monthly payments on a new (principal and interest 25-year) loan will be around 25 per cent larger,” said the RBA.

However, the RBA added that currently over 35% of housing credit is fixed-rate debt, and these borrowers ‘won't face an increase in their interest expenses and loan payments until their fixed rate expires.

According to Westpac, the recent drop in oil prices has had an “immediate impact on budgets.”

Results of the September survey showed inflation was still the major concern among 61% of survey respondents, followed by the economy, budgeting, interest rates and overseas economic conditions.

Riskier investment options among respondents, including real estate and stocks, fell to 8% and 10%, respectively, in September.

Furthermore, the Australian dollar (AUD) has seen weakness in 2022 amid a bearish economic outlook and high inflation. The AUD/USD has lost nearly 10% in the last six months, as of 21 September, making it more expensive for Australians to travel abroad.

Selling pressure on the Aussie, a commodity currency, has increased in the face of a global economic slowdown and easing commodity prices in recent months.

Initial forecasts indicate a gloomy outlook for the near term.

The raised inflation forecast highlighted the RBA’s need to be more aggressive on the rate hike front to control inflation.

David Plank, head of ANZ Research, said the central bank could hike rates by 50 bps in October to take the cash rate in Australia to 2.85%.

Bill Evans of Westpac also saw the RBA hiking rates by 50 bps in October and added that the terminal rate could reach 3.6% by February 2023.

“The current weakness in Consumer Sentiment is still deeply troubling. The September rise might be heralded as the likely start of a sustained revival. As welcome as that would be, it seems premature given ongoing challenges, especially around inflation, and prospects of further interest rate rises,” read the Westpac Melbourne Institute Index of Consumer Sentiment for September 2022.

“It will be interesting to see how Consumer Sentiment responds if the pace of tightening slows. As highlighted, sentiment was unlikely to fall below the 80 level while labour markets were operating near full employment, notwithstanding the headlong collapse since November last year. We expect Sentiment to hold in the current range as consumers realise that the tightening cycle has further to run, although a smaller rate increase in October will be encouraging for some.”

According to global macro models and analysts expectations from TradingEconomics, Australia consumer sentiment was projected to trend around 100 points in 2023 and 98 points in 2024.

When looking at Australia consumer sentiment forecasts, it’s important to bear in mind that analysts’ forecasts can be wrong. Forecasts shouldn’t be used as a substitute for your own research.

Always conduct your own due diligence. Remember that your decision to trade or invest should depend on your risk tolerance, expertise in the market, portfolio size and investment goals. And never invest money that you cannot afford to lose.