The S&P Global Metals and Mining ETF (XME) has dropped more than 22% since the end of August, seeing its biggest daily drop this month on the 21st September. This was following the US Federal Reserve announcing another 75-basis points interest rate hike at its September meeting.

This is the third consecutive interest rate hike of this scale by the US Fed, with the central bank having avoided a 100-basis points hike, but still highlighting that further large rate hikes were in the cards in the coming months. This has been compounded by the Bank of England (BoE) also raising interest rates by 50 basis points this month as well.

Further the European Central Bank has recently gone on record to highlight that it may be required to hike rates to a point which restricts economic growth something, in order to battle soaring inflation.

This has led to the question: do miners continue to remain subdued due to multiple interest rate hikes?

Why has the XME been dropping so much lately?

This is a big blow to a number of international miners such as Rio Tinto (RIO) and Anglo American (AALI), which operate across geographies and often, very diverse economic and political conditions.

Miners typically have a lot of leverage, borrowing huge amounts to fund expensive new mines or to expand and repair existing ones. Since it can take up to 10 years for a mine to be fully up and running, the costs add up significantly, contributing to the size of loans and interest rates.

Furthermore, a continually strengthening US dollar (DXY) is also adding to woes for global miners, as the dollar (DXY) is often the currency of choice for cross-border transactions. This has gone a long way in cutting into profit margins and making purchasing raw materials, machinery and other inputs much more expensive.

Not only that, but a worsening energy crisis in Europe as well as China has also caused a number of smelters to shut down, thus causing an excess of metal stockpiles across some of the biggest metal hubs in the world, such as Shanghai. London Metal Exchange (LME)n registered warehouse stocks have also reached record highs due to this.

However, because of a stronger dollar (DXY), it is also more difficult for manufacturers to offload these metal stocks to overseas buyers, for whom they have become much more expensive, leading to a market surplus.

Moreover, fears of a global economic slowdown and recession following more aggressive rate hikes have also spooked investors into believing that the mining and metals industry may be in for a downturn in the coming months.

The XME was trading at approximately $41.3 at the time of writing, having dropped another 5% today and about 37% down from April highs. This has been very illustrative of the state of the ailing mining industry itself, as the commodity supercycle seems to be drawing to an end.

Earlier than that, the XME saw its last golden cross happening on the 9th February, when the opposite happened and the 50-day moving average crossed above the 200-day moving average. This indicated the start of an uptrend, and indeed, was characterised by the XME gaining about 43% from 9th February to the record highs on 18th April.

Furthermore, the XME’s Relative Strength Index (RSI) has also touched 30 on the 23rd September, indicating that the stock may very well be oversold and could possibly still have a lot of upside potential. 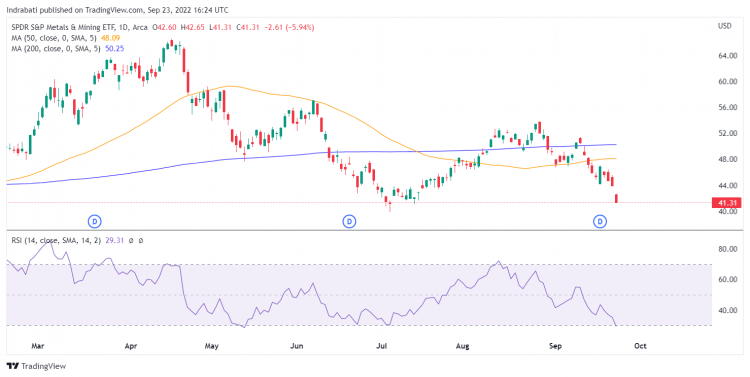 What is the outlook for the mining industry overall?

A recent report by Moody’s has highlighted that the ratings agency has just downgraded the outlook for the global metals and mining industry from stable to negative, citing global economic slowdown and the possibility of a coming recession.

The resulting downturn has led to falling metal prices, even though they are still higher than pre-pandemic years. However, prices are still trading much below the highs seen earlier this year in March and April, at the height of the Russia-Ukraine war.

The report also goes on to emphasize that earnings before taxes are likely to considerably fall for base metal producers, especially copper, zinc, aluminium and nickel, mostly due to a lot of producers having had to cut down on production amounts. Combined with a higher cost of input due to sticky high inflation, as well as lower metal prices, as the construction sector in many major markets suffer, the mining industry is likely in for a turbulent time this winter.