News and Analysis News Commodities Will oil hit $200? What effect would that have on markets?

Will oil hit $200? What effect would that have on markets?

The escalating conflict between Russia and Ukraine has already pushed oil prices to a 14-year high and the 2008 record of more than $147 per barrel doesn't look far anymore. Several market experts already see chances of the commodity surging to new all-time highs.

Bank of America's commodity research team sees oil reaching $200 if Western nations impose an embargo on Russian oil imports, while Schork Group expect it to go to $160. Russia's deputy prime minister Alexander Novak has warned that if Western countries reject Russian oil, the price would surge to more than $300 per barrel, if not more.

US oil prices have already surged 170% since the end of 2020 and a rise to $200 would mean a further increase of more than 50%. What would such a scenario mean for global markets and the economy?

An energy-price shock of such magnitude would be challenging for oil-importing advanced nations to absorb and could also push the global economy towards stagflation, generating winners and losers in financial markets.

Energy stocks and commodity-related currencies are among the most directly oil-linked assets. However, the indirect effects of $200 oil would have an influence on precious metals such as gold, which has historically outperformed during stagflationary times.

In the case of a Russian oil embargo, Francisco Blanch, Head of Global Commodities at Bank of America, and his team of analysts believe that oil prices might double from $100/bbl to $200/bbl.

“There could be a 5 million barrel a day or larger shortfall even if there is some offset from the release of strategic reserves and some increase in OPEC exports”, BofA says.

BofA predicts that an unanticipated 1 million barrels per day supply or demand shift may result in a $20/bbl oil price change, everything else being equal.

Where would the embargo on Russian oil hit the most?

Russia is one of the world’s biggest producers and exporters of oil products.

Although China is Russia's largest single oil purchaser, absorbing 1.6 mb/d on average in 2021, a Russian oil embargo may have the greatest impact on advanced European countries.

Oil imported from Russia accounts for a far smaller share of overall imports in Japan and the United States (3 and 7 percent respectively). 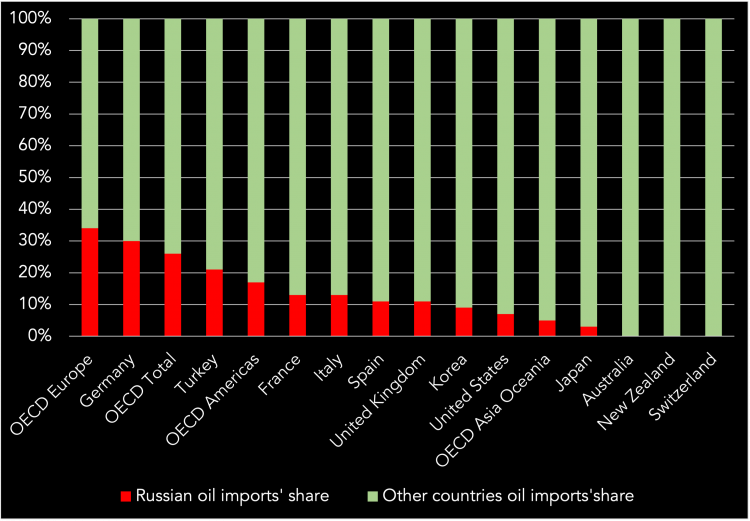 Oil at $200 raises the risk of a more structural inflation

Soaring oil prices have been destabilising investor-inflation expectations, pushing them to the highest levels seen in decades.

The 10-year breakeven inflation rate in the United States, which is a proxy for what market participants expect inflation to be on average over the next decade, rose to 2.8% this week, a new record high since the series began.

Meanwhile, the price of a gallon of gasoline in the United States rose close to $4, setting another record high.

With the ongoing supply disruptions in the oil market, there is a significant risk that energy price increases will continue to exert upward pressure on the overall inflation basket. 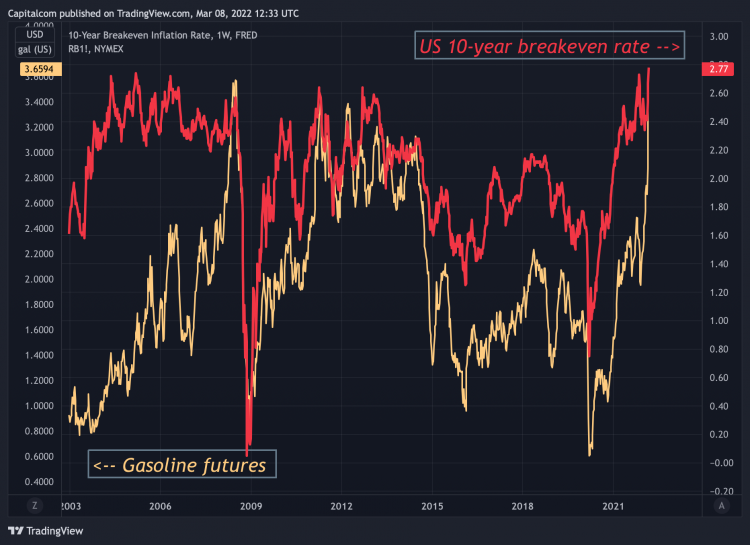 The tight relationship between 10-year US Breakeven rate and US Gasoline futures – Credit: Capital.com / Source: Tradingview

Oil at $200? Stagflation may be inevitable

Oil at $200 per barrel would certainly be inflationary, but it would also have a detrimental impact on economic growth, potentially driving the global economy into stagflation.

The International Monetary Fund (IMF) has warned that the ongoing Russia-Ukraine conflict and related sanctions against Russia would have a negative effect on the global economy.

According to Bank of America estimates, a protracted period of oil prices at $100 per barrel reduces US GDP growth in the year ahead by 1% all else being equal. If oil prices reach $200 a barrel, the negative impact on economic growth in the US might be roughly 2%.

History suggests that the global economy suffers and enters into stagflation when oil prices rise wildly.

This happened between July 1973 and December 1974, when oil prices almost tripled from $3 to $11 a barrel, with the gap between the growth rate and inflation in the United States plummeting to -14%.

Oil quickly doubled from $17 to $34 during the first Gulf War in the early 90s, again bringing the differential between US GDP growth and inflation into negative territory. 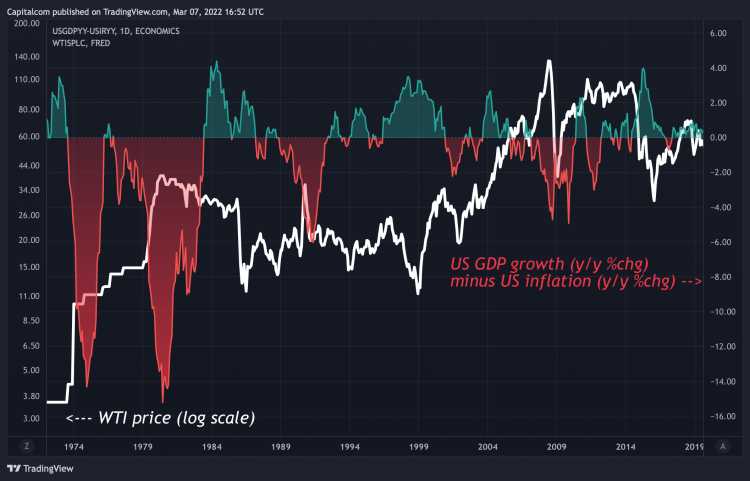 The assets most directly linked to the price of oil are obviously the shares of oil companies and the major currencies of oil-exporting countries. 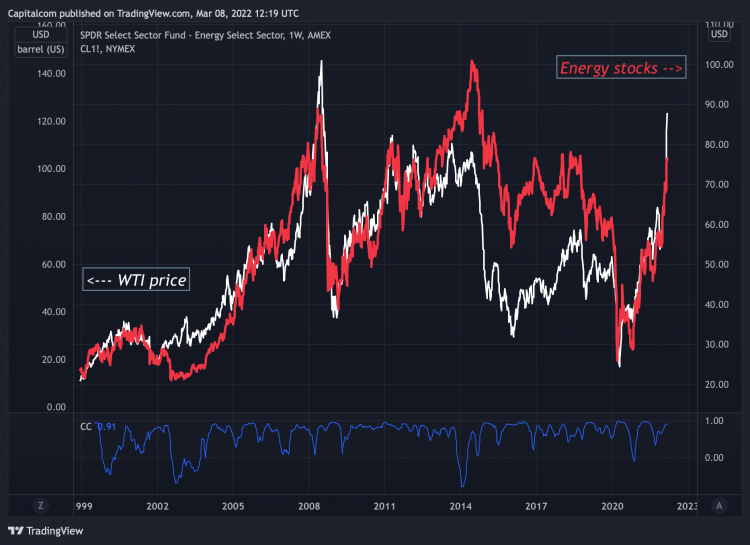 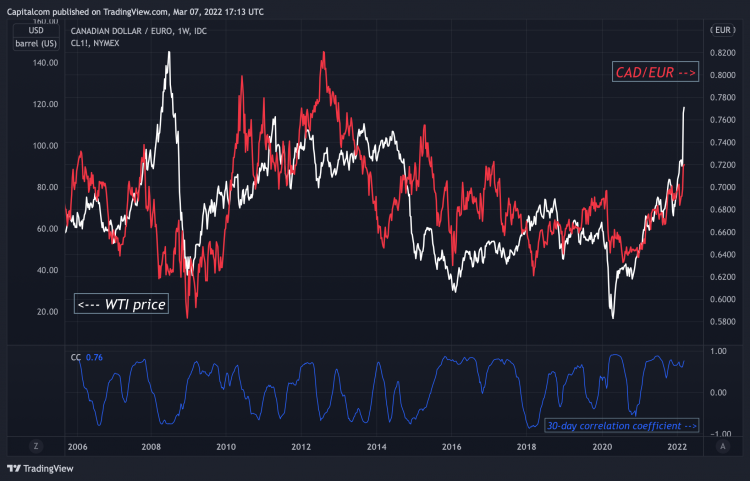 During past episodes of stagflation, oil prices spikes were associated with gold outperforming the stock market.

The weakening economic picture, along with the presence of runaway inflation, causes investors to abandon risk assets such as equities in favour of safe havens such as gold.

Oil and gold during stagflation 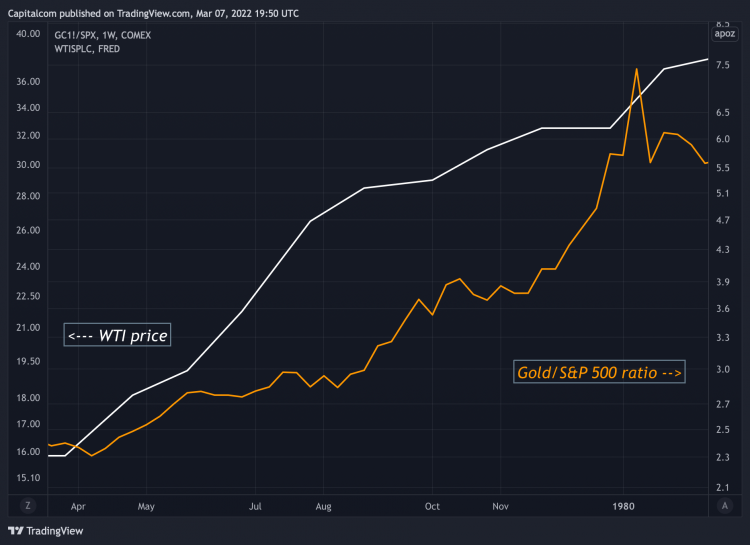 Capital.com Will oil hit $200? What effect would that have on markets?