News and Analysis News Forex No support for weak pound from retail data: Is GBP on a long-term decline?

No support for weak pound from retail data: Is GBP on a long-term decline?

Despite July sales managing a 0.3% bump after a 0.2% fall in June, sales volumes were 1.2% lower compared with the previous quarter.

Sterling slumps again against USD – how long will a sell-off last?

“This continues the downward trend since summer 2021,” the ONS said.

But this was the only other clear merch positive – all other household categories were down.

Consumer self-belief is taking a battering from rising interest rates and rents, food prices and energy bills, plus higher petrol and diesel costs.

Very little in the UK supply chain is spared the current inflation destruction.

The high street cost pressures are reflected in a 7.8% sales value rise over 12 months says the ONS, yet overall volumes are 3.4% down on a year ago.

No rate let off

“Actually, the market now prices a 56bp hike on that date. It is fair to say sterling remains fragile. However, it looks more vulnerable versus the dollar, where GBP/USD can trade down to the 1.1935/50 area.”

The Bank of England’s job – to get inflation back down to near 2% without undermining business and employment prospects – is close to Titanic.

It’s further complicated by terrifying stagflation risk, namely that of an apathetic economy lashed to rocketing costs and prices.

“That’s reflected in weakness in the pound, which is actually good news for a globally-orientated FTSE 100 as it flatters the relative value of overseas earnings,” AJ Bell’s Danni Hewson said.

A FTSE 100 earnings boost won’t lift the mood of those budgeting for huge winter energy bills though. Ruth Gregory, senior UK economist at Capital Economics says as inflation is set to surge further, “we think the worst of the spending crunch still lies ahead”.

“Indeed, the decline in the own finances balance of the GfK consumer confidence survey implies sales still have further to fall.”

“The Overall Index Score dropped three points in August to -44, the lowest since records began in 1974,” client strategy director Joe Staton at GfK said this morning.

“All measures fell, reflecting acute concerns as the cost-of-living soars. A sense of exasperation about the UK’s economy is the biggest driver of these findings.

“Just making ends meet has become a nightmare and the crisis of confidence will only worsen with the darkening days of autumn and the colder months of winter.” 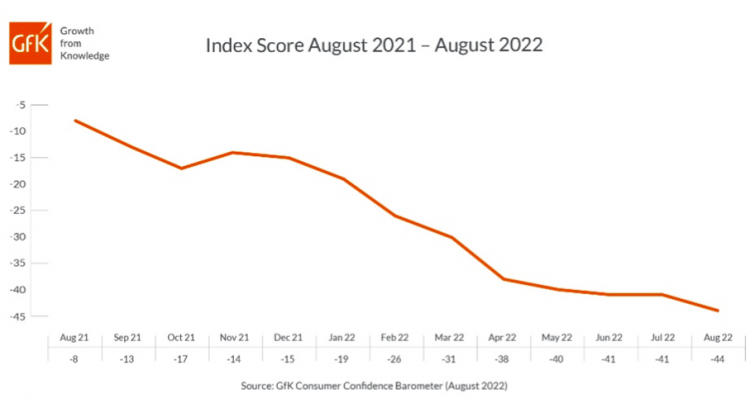 Currency strategist Justin McQueen at DailyFX says sterling, continuing to weaken across the board, looks more and more like a stagflation poster child.

“This has been mostly played out against the USD as Fed Officials push back against the Fed pivot narrative, prompting cable to make a firm break through 1.20.

“That said, what is perhaps a surprise is the fact that while GBP sentiment is through the floor, net-long positioning among leveraged funds is stretched, leaving GBP vulnerable to liquidation risks. Path of least resistance remains lower GBP.”

Manchester United sale: How much are MANU outstanding shares worth?

Capital.com No support for weak pound from retail data: Is GBP on a long-term decline?