Unfashionable, but not unpopular

Warren Buffett is a legendary investor, philanthropist and holder of the Presidential Medal of Freedom – the USA’s highest honour.

Known as the ‘Oracle of Omaha’ (a nod to his investment foresight and his place of birth), he has amassed a fortune of over $100bn (£77bn) as CEO of Berkshire Hathaway (BRK).

Investors looking to find out more about the world-famous investment vehicle are often surprised by a visit to its website: it has remained unchanged since 2002, and has been described by The Atlantic as ‘a trip through the HTML time machine’.

It may lack a slick investor relations section, but this site tells us a good deal about Warren Buffett and his trading strategy – namely his willingness to stick with what works and defy prevailing investment trends.

A single Class A share in Berkshire Hathaway hit a record price of $500,000 on 14 March 2022, but with the rise of trading apps, cryptocurrencies, non-fungible tokens (NFT) and meme stocks, will Buffett’s approach continue to stand the test of time?

Read on for a closer look at Warren Buffett’s favorite stocks and an insight into Berkshire Hathaway’s most recent investment reports.

Berkshire Hathaway is a US conglomerate which acts as an investment vehicle for Warren Buffett and his vice chair, Charlie Munger.

Originally a textile firm, an investment group led by Buffett took full control of the company in 1965, and it has gradually expanded to form a holding company for Buffett’s other investments and acquisitions.

The firm currently has a controlling interest in a cluster of insurers, BNSF Railway and Berkshire Hathaway Energy, with these companies making up a large chunk of Berkshire’s value.

“What is most interesting about Buffett is his diversification.”
by Kathleen Brooks, Minerva Analysis.

Warren Buffett’s firm also has a large equity portfolio, and holds non-controlling stakes in a number of companies, listing stocks including the American Express Company (AXP), Apple Inc (AAPL) and the Coca-Cola Company (KO) among its biggest holdings.

Berkshire Hathaway is also currently holding $144bn of cash and cash equivalents on its balance sheet.

“What is most interesting about Buffett is his diversification. He has 25–50% of his portfolio in businesses that he wholly or in part owns, he also owns a number of insurance companies to give him access to cheap cash – insurers can be large lenders in the markets – to fund his other investments,” said Kathleen Brooks, founder of Minerva Analysis, in an exclusive statement to Capital.com.

“He also keeps a decent amount of his portfolio in cash, in case he has to cover mistakes,” Brooks added.

“Warren Buffet's overarching investment strategy for decades has been to buy well-managed businesses that can produce good profits in a variety of economic environments,” she said.

Investors can buy stock in Berkshire Hathaway itself, and it trades on the NYSE under the ticker BRK.

Warren Buffett’s Berkshire Hathaway issues Class A (BRK.A) and Class B (BRK.B) shares. A Class B share has the rights of 1/1,500th of a share of Class A stock, and 1/10,000th of the voting rights of a Class A share.

The past five years have seen the BRK.B share price almost double, increasing from around $167 in March 2017 to $326.60 at the time of writing. The share price took a significant hit between February and March 2020, losing over 25% of its value as the onset of the coronavirus pandemic rattled investors. 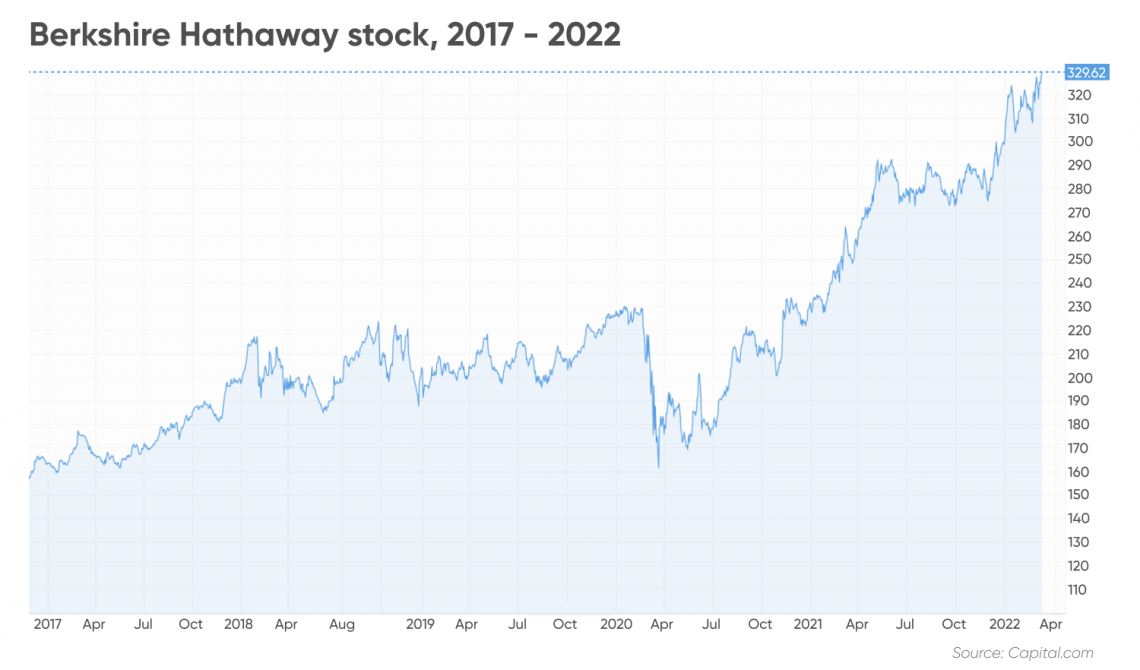 Since then, it has mounted a strong recovery, reaching an all-time high of $329.98 on 14 March 2022 as investors rushed to defensive stocks and markets remained unsettled by surging inflation and the Russian invasion of Ukraine.

According to Berkshire Hathaway’s letter to shareholders in February 2022, between 1965 and 2021, Berkshire has delivered a compounded annual gain of 20.1%, compared to 10.5% for the S&P 500 (SPX), including dividends over the same period.

How has Berkshire Hathaway achieved these market-busting returns? Read on for a closer look at Warren Buffett’s investing strategy and Warren Buffett stocks.

“Berkshire now owns a wide variety of businesses, some in their entirety, some only in part… whatever our form of ownership our goal is to have meaningful investment in businesses with both durable economic advantages and a first-class CEO,” said Buffett in a 26 February letter to shareholders.

Unlike many other investors, Warren Buffet doesn’t work in terms of favourite stocks, or top stock picks. And this point was reinforced by Buffett himself in the same letter.

“Please note particularly that we own stocks based upon our expectations about their long term business performance and not because we view them as vehicles for timely market moves. That point is crucial: Charlie and I are not stock-pickers; we are business-pickers,” he stressed.

A further key focus of Warren Buffett’s stock portfolio is long-term capital growth through the repurchase of Berkshire shares. In simple terms, this means that profits are ploughed back into the firm, rather than distributed to investors through dividend payouts.

Over the past two years, Berkshire repurchased 9% of the shares that were outstanding by year-end 2019, meaning that Berkshire shareholders now own around 10% more of all Berkshire businesses.

In theory, working to generate dividends can impose a useful discipline on firms, and investors can also benefit from ‘bird in hand’ returns – the idea that investors place greater value on a current payout they are guaranteed to receive rather than a reinvested payout they are due to receive in the future.

What is your sentiment on BRK.A10?

However, advocates of Buffett’s approach could point to the fact that Berkshire has significantly outperformed the S&P 500 over the past 57 years – even with dividends included.

In Berkshire’s 2018 AGM, Munger controversially described crypto trading as “just dementia”, saying “it’s like somebody else is trading turds, and you decide that I can’t be left out”.

Buffett has been equally scathing about trading app Robinhood, accusing it of creating a casino-like investment environment in Berkshire’s 2021 AGM.

At the crux of Berkshire’s criticism of both crypto and Robinhood is that investment in non-productive assets can lead to bubbles, causing damage to both individual investors and entire economies.

Robinhood has since mounted a rebuttal, saying that “the new generation of investors aren’t a ‘casino group’. They are tearing down old barriers to investing and taking control of their financial futures. Robinhood is on the right side of history” in comments to CNBC.

Unfashionable, but not unpopular

Buffett may not be an early adopter, but his tried and tested approach could prove increasingly popular as markets reel from events in Ukraine and an uncertain macroeconomic environment.

“This diversification strategy may not be particularly ‘sexy’ or headline-grabbing, but it is a great framework on which to build his portfolio and has been very beneficial to his shareholders. It is also a strategy that should work with the business cycle, which is what every investment manager wants,” explained Minerva’s Brooks to Capital.com. 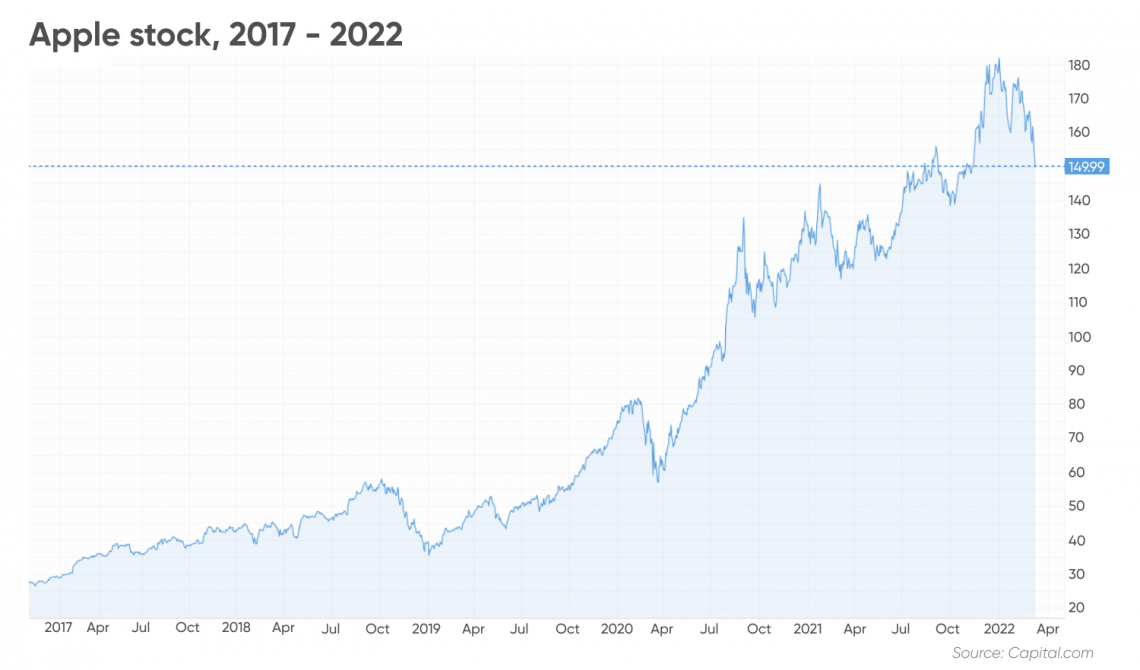 The Bank of America Corporation (BAC) is an international investment bank and financial services corporation, and is the next company in the Warren Buffet shares list.

Since March 2017, its stock price has increased from around $24 to $39 at the time of writing, though with significant fluctuations along the way. The share price hit a five-year low of around $19.50 in March 2020 as the coronavirus pandemic hit the markets, although January 2022 saw a five-year high of over $49. 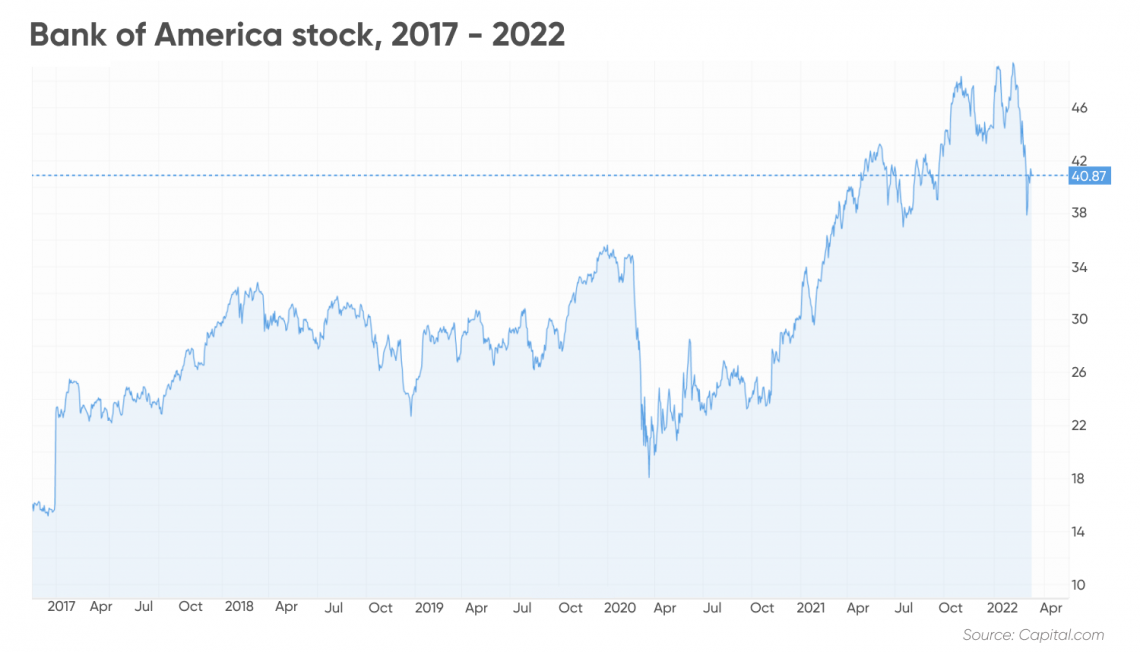 The American Express Company (AXP) is a financial services company, known for its charge and credit cards. Over the past five years, the AXP share price has more than doubled – though with considerable fluctuations along the way. 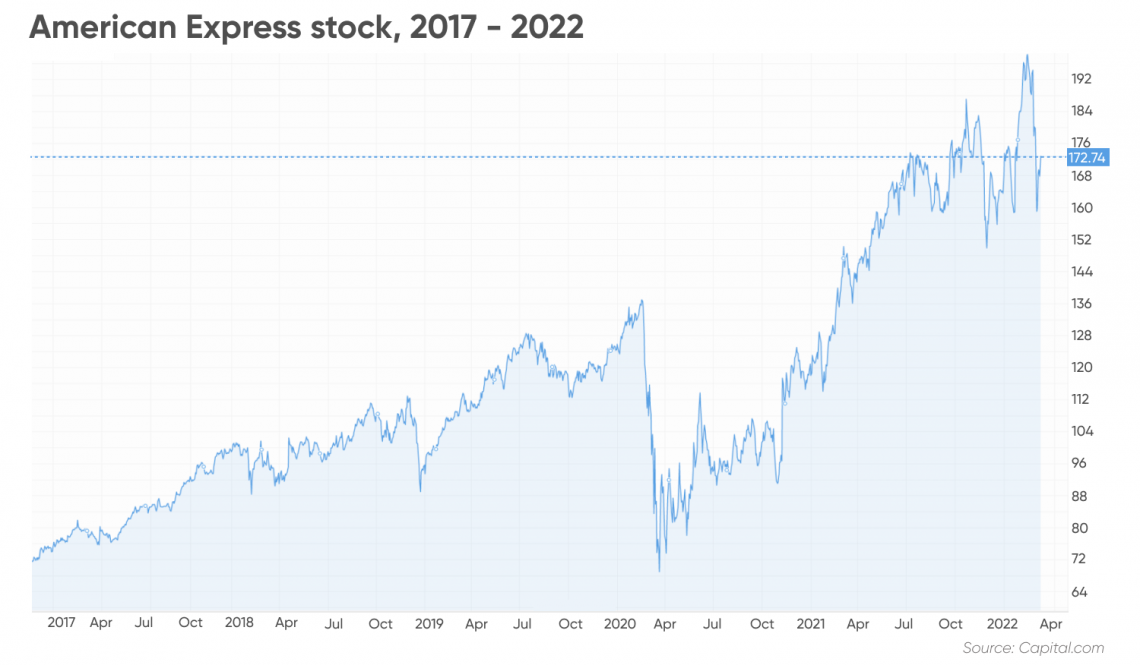 The Coca-Cola Company (KO) is a multinational company famed for its non-alcoholic sparkling soft drinks, and is the fourth on the Warren Buffest stock list.

The past five years have seen the KO share price increase around 50%, although its price plummeted in spring 2020 as the impact of the pandemic hit. The Coca-Cola share price hit a five-year low of around $38 in March 2020, but recovered to a five-year high of over $62 on 28 February 2022. 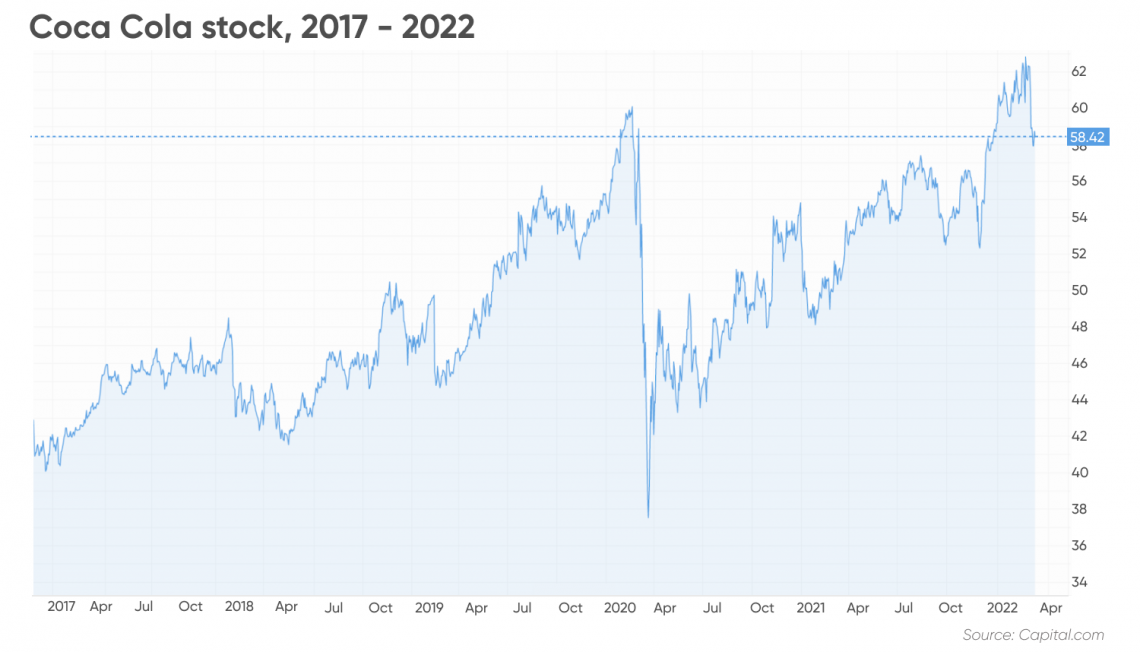 Note that analyst predictions can be wrong. Forecasts shouldn’t be used as a substitute for your own research. Always conduct your own due diligence before investing, and never invest or trade money you cannot afford to lose. Past performance does not guarantee future returns.