What drives the USD/SGD exchange rate?

USD/SGD forecast: How will the macro outlook affect the pair?

The US dollar (USD) has turned higher against the Singapore dollar (SGD) in the past week, after falling to its lowest level since May in response to the Monetary Authority of Singapore (MAS) tightening the city state’s monetary policy in July.

The SGD has gained as much as 2.8% against the USD in the past month, with the MAS conducting monetary policy by adjusting exchange rates rather than moving interest rates.

The MAS raised the midpoint of the SGD’s trading band against other currencies in response to rising inflation. The move came even as Singapore’s second quarter gross domestic product (GDP), a key economic metric, came in below expectations at 4.8% compared with a consensus estimate of 5.4%, although first-quarter GDP was revised up from 3.7% to 4%.

Can the Singapore dollar continue to gain value against the US currency even with the persistent strength in the greenback against a basket of currencies? Or will the USD continue to rebound against the SGD?

In this article, we look at what drives the value of the two currencies and the outlook for the USD/SGD exchange rate based on analysts’ forecasts.

What drives the USD/SGD exchange rate?

The USD/SGD currency pair in foreign exchange (forex) trading shows how many Singapore dollars – the quote currency – are needed to buy one US dollar – the base currency.

The Singapore dollar is the official currency of Singapore and it is also accepted in the state of Brunei as a result of a Currency Interchangeability Agreement.

The MAS manages the value of the Singapore dollar by intervening in the forex market and adjusting the banking system’s liquidity. It releases statements about the nation’s monetary policy twice a year. Since 1985, the MAS has maintained the Singapore dollar in a floating band known as the Singapore Dollar Nominal Effective Exchange Rate (S$NEER). The S$NEER values the Singapore dollar against a basket of currencies from Singapore’s main trading partners and competitors to manage inflation from imports and maintain the competitiveness of its exports.

Singapore’s economy is centred on intermediary trade, buying raw materials that it refines for export, and its port is the second busiest in the world measured by cargo tonnage. The city state is also a regional financial hub for corporate banking and wealth management.

As Singapore imports natural resources and raw materials for refining, the value of its dollar is strongly influenced by commodities prices. And as exports account for a large proportion of its GDP, demand for products such as chemicals, refined petroleum and electronics is an important driver for the currency.

The US dollar is the world’s reserve currency and as such is the most actively traded on the forex market. The dollar reflects the economic performance of the world’s largest economy, and by extension, is affected by sentiment on the health of the global economy. Currency traders closely monitor major economic indicators including GDP, manufacturing activity, unemployment rates, and international trade data to gauge the performance of the US economy as well as the global outlook.

The US dollar is considered to be a safe haven asset, along with US Treasuries and precious metals, which investors buy to protect their wealth during periods of economic and geopolitical uncertainty.

What is your sentiment on USD/SGD?

Give USD/SGD a try

Government policies on interest rates and inflation have taken centre stage this year as central banks have begun to lift interest rates with inflation in many countries running at multi-decade highs. Higher interest rates tend to make a currency more attractive for overseas investors as they offer the potential for higher returns from fixed income and other investments.

The US Federal Reserve (Fed) raised its target range for interest rates from 0-0.25% in March to 2.25%-2.5% in July, and some observers expect it could raise rates by another 75 basis points at its next meeting in September. The Fed has indicated that it aims to bring rates up further to 3.75%-4% by the end of 2023. That has helped to drive up the value of the US dollar against other currencies with lower interest rates. The dollar has also found safe-haven support on concerns that the aggressive interest rate rise in various countries could result in a recession heading into 2023.

The MAS has been tightening its monetary policy since October 2021 in response to economic growth and rising inflation. MAS tightened its policy further in its second off-cycle meeting of the year on 14 July by raising the midpoint of the S$NEER policy band. That comes after a double tightening in April, when it re-centred the midpoint and slightly increased the policy band’s rate of appreciation “to exert a continuing dampening effect on inflation”. The April adjustment reversed the monetary easing policy that MAS introduced at the start of the Covid-19 pandemic. 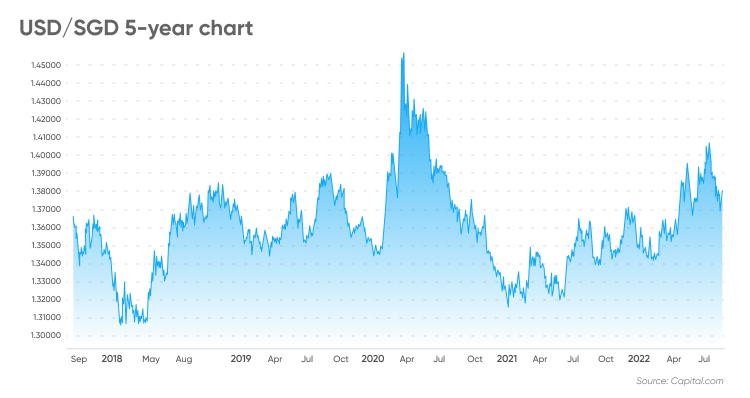 But the USD gained value against the SGD, rising to 1.3787 on 15 August, as the US currency caught a safe-haven bid in response to weaker than expected economic data out of China for July and an unexpected interest rate cut by the Peoples Bank of China by 10 basis points to 2.75%.

Statistics from the world’s second largest economy showed contracting retail sales and residential property sales, as well as industrial production and fixed-asset investment below expectations. The concerns about global economic growth were compounded by weaker US manufacturing data.

What is the outlook for the USD/SGD exchange rate for the rest of 2022 and into next year? We look at the latest analysts’ forecasts below.

USD/SGD forecast: How will the macro outlook affect the pair?

The MAS is expected to continue raising the S$NEER policy band, which is likely to keep the USD/SGD pair below the 1.40 level, according to analysts’ forecasts.

“The S$NEER will likely continue to trade within the upper half of the policy band, leading to further gains in the basket. The appreciation in the S$NEER will limit upside risks to USD/SGD.

“For now, we expect the aggressive tightening by the MAS to allow the USD/SGD to decline to 1.36 by end-2022.

“At its next meeting in October, we expect an increase in the slope of appreciation to at least 2.00% pa to lean against the tide of surging prices.”

Victoria continued:  “Singapore’s economy contracted 0.2% from the previous three months in the second quarter, which prompted the city-state to trim its 2022 growth forecast to a range of 3%–4% from 3%–5% seen before,” Qi Gao, analyst at Canada’s Scotiabank noted on 15 August, forecasting that “the SGD will continue running a tight correlation with the EUR, while following a broader market tone. USDSGD could hover around the 1.37 level with odds of sliding towards 1.36.”

At the time of writing (17 August), algorithm-based forecasters also expected the USD/SGD to gradually trend lower over the coming years as the Singapore dollar appreciates in value.

When looking at any USD/SGD prediction, it’s important to keep in mind that forex markets are highly volatile, making it difficult to make accurate long-term estimates. We recommend that you always do your own research. Look at the latest market trends, news, technical and fundamental analysis, and expert opinion before making any investment decision. Keep in mind that past performance is no guarantee of future returns. And never invest money you cannot afford to lose.

EUR/USD forecast: What next after parity?

Capital.com USD/SGD Forecast | Will USD/SGD Go Up or Down?