The Chinese yuan has had a phenomenal November so far, with the USD/CNH pair plunging more than 4% from its peak of 7.37 at the end of October.

Three positive macro catalysts have materialized, causing the yuan and Chinese equity indices, such as the Hang Seng (HK50) and the onshore FTSE China 50 index (CN50), to rally.

First, last week's US CPI numbers were worse than anticipated, with the inflation rate falling to 7.7% in October from 8.2% in September. This caused market players to cut their expectations for future Fed rate hikes, resulting in a broader dollar decline.

Second, there has been positive domestic policy development in China, with the government giving promising signals towards a progressive reopening of the economy and the exit from the Covid-zero approach. A meeting between Chinese President Xi Jinping and US President Joe Biden at the G20 Summit was also good news for the market.

Third, even bad economic news might be good news. The yuan rebounded despite dismal economic statistics for October, which indicated a further deceleration in inflation, a decline in retail sales, and lower-than-expected industrial production. The market most likely interpreted this as increasing pressure on Chinese authorities to stimulate the economy and support the domestic real estate sector through more accommodating monetary and fiscal policies.

The People's Bank of China will convene the next week to decide on its key policy rates. Given the recent string of poor economic data and the government's supportive statements, there may be potential for a reduction in the 1-year Loan Prime Rate, which is now 3.65%.

Is the yuan's downturn over, and the Chinese currency set to continue rising as the economy slowly reopens? 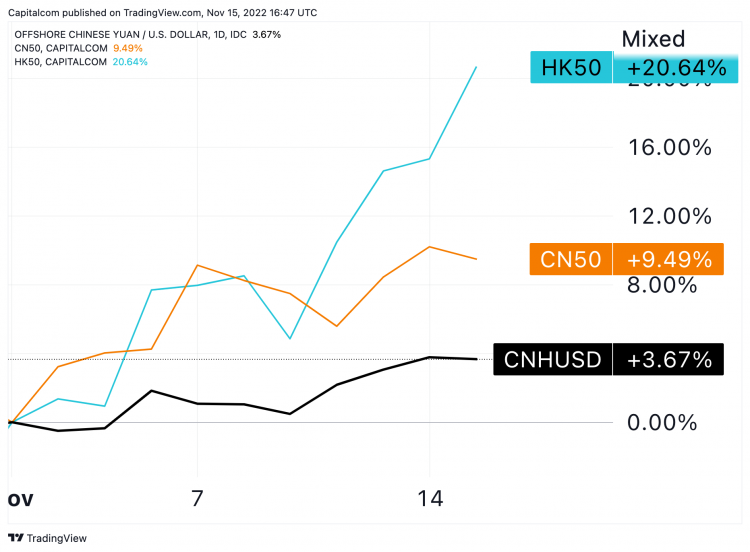 The latest slew of economic data in China has been worse than expected, signaling an ongoing slowdown in economic activity, as Covid outbreaks continue to weigh on business and consumer sentiment.

China's retail sales fell 0.5% year on year in October 2022, reversing a 2.5% growth the previous month and falling short of market expectations (1% rise). This marked the first drop in Chinese retail sales in five months. Industrial production grew 5.0% year-over-year in October 2022, which was below market expectations of a 5.2% gain and following a 6.3% increase the previous month. Growth in fixed asset investments also slowed in October, coming in at 5.8%, slightly below the forecast of 5.9%.

Annual inflation in China fell to 2.1% year on year in October 2022, from 2.8% the previous month, pointing to the lowest inflation reading since May and well below the market consensus of 2.4%. At the same time, also producer price pressures eased, with the PPI falling 1.5%, recording the first drop since December 2020.

The combination of weaker Chinese activity data and a slowdown in the inflationary trend could drive the PBoC to loosen monetary policy even more.

On November 21, the PBoC is scheduled to unveil its key lending rates, including the 1-year Loan Prime Rate, which is now at 3.65%, and the 5-year Loan Prime Rate, which is currently at 4.3%. If the PBoC reduced its policy rates, that would likely result in an increase in sentiment toward Chinese assets as it would signal increasing pressure on the government to intensify stimulus measures to bolster the economy.

What is your sentiment on USD/CNH?

Give USD/CNH a try 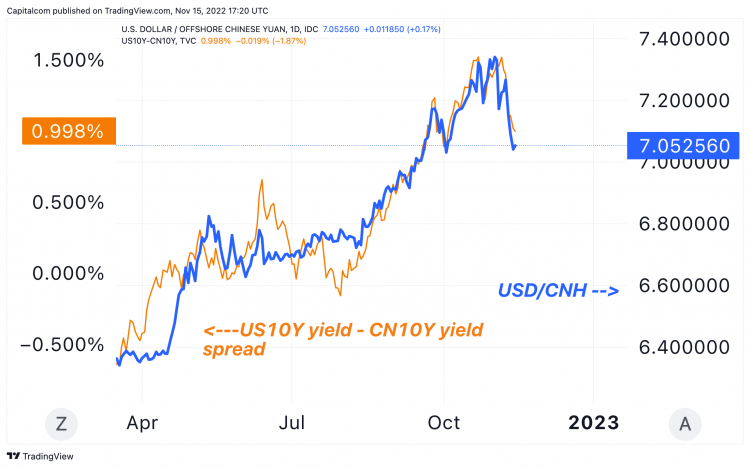 USD/CNH vs 10-year yield spread between US and China – Photo: Capital.com, Source: Tradingview

The dollar-yuan (USD/CNH) pair has been moving essentially 1-to-1 with the 10-year yield differential between United States and China.

The yield spread between the two 10-year bond benchmarks reflect not only monetary policy divergences, but also expectations on future economic growth.

Therefore, if we see progress towards a Chinese economic reopening we might continue to see the 10-year yields moving up in China, and therefore creating downside pressure in the yield spread between the 10-year Treasury and the 10-year Chinese bond, as well as on the USD/CNH pair. 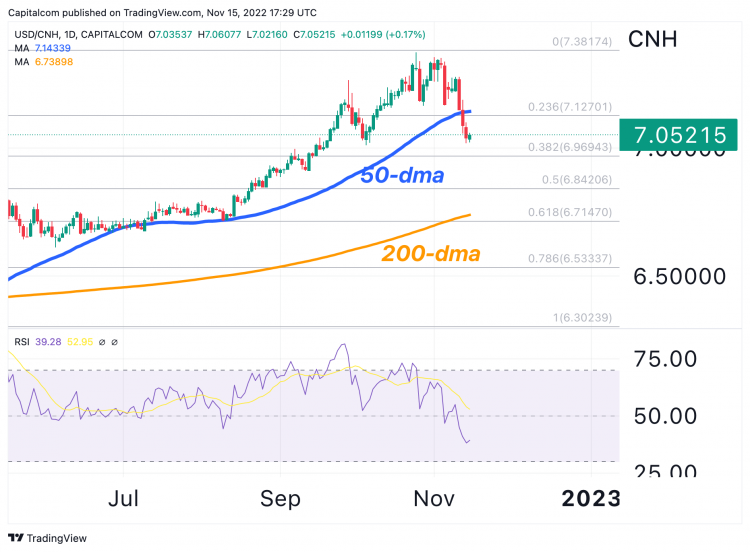 After the bearish RSI divergence witnessed at the end of October, the bearish price action in the last USD/CNH sessions has been particularly quick and violent.

The pair smashed the 50-day moving average support at 7.14 and also broke below the 23.6% Fibonacci retracement level of 2022 high-low range.

The 50-dma has held up well as dynamic support throughout the year and has now become the first line of resistance.

The 7.00 milestone, which is also close to a significant Fibonacci level (38.2%), serves as the next support right now. A reversal in the USD/CNH trend could be confirmed by a break below 6.84, the 50% Fibonacci level of support.

Positive policy announcements in China, like a rate cut by the People's Bank of China (PBoC) or further easing of Covid measures by the government, combined with a broader bearish momentum in the dollar, could lead USD/CNH's bears to aim for below 7.00 in the near future and probably test the 50% Fibonacci level.

On the other side, a rise in Covid cases along with hawkish Fed remarks may stop the bearish pressure on the USD/CNH and prompt some dip-buying activity around key technical supports.

USD vs CPI: Dollar dips after US inflation heat eases. Is the DXY bull trend over?