The Canadian dollar is trading higher on Monday as risks sentiment continues to pull through. Markets were likely expecting that Friday’s stronger-than-expected NFP reading would help cushion the dollar after days of heavy declines but the safe haven momentum failed to materialise.

USD/CAD was back attempting to break below 1.34 this morning after a partial rebound to end the week last week, but the better-than-expected ISM Non-manufacturing PMI (56.5 vs 53.3) has meant that USD buyers have recovered some ground, turning the momentum in the pair. The move lower this morning found resistance at 1.3385 but USD/CAD still has some room to move lower before finding its ascending trend line support (1.3356) and its 100-day SMA (1.3295). On the topside, the move seems limited as the daily chart shows a pattern of lower highs, but a close above Friday’s high (1.3520) could signal renewed bullish momentum, especially after Friday’s close above Thursday’s high. 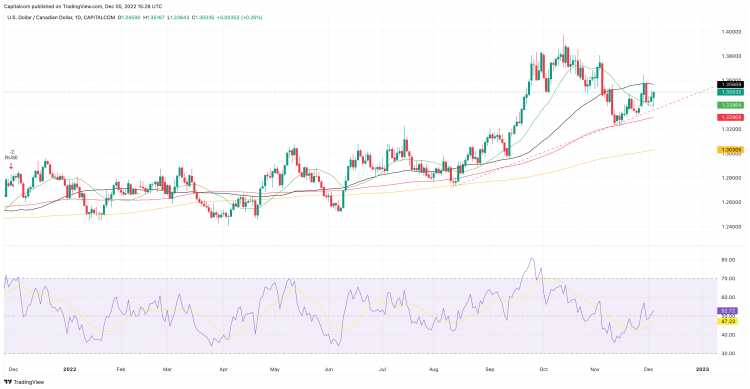 Oil bounces back as China scales back some restrictions

The Canadian dollar has also been picking up bullish momentum on the back of the recovery in oil prices after hitting a new 11-month low on November 28th. The commodity has been highly volatile in recent weeks as concerns about the covid situation in China were dominating the news headlines. But recent optimism about the possible end of strict lockdowns has enabled crude prices to bounce back over the last week, with west Texas intermediate (WTI) back above $80 per barrel.

Oil prices are also edging higher this morning after OPEC+ met on Sunday night and agreed to keep its policy unchanged for the foreseeable future, meaning the 2 million barrels per day cut proposed in October will continue until the end of 2023. The initial decision was taken after oil prices had fallen heavily since the highs in the summer amid slowing demand and weaker economic forecasts. The group will meet again on February 1st to review their decision.

The outlook for crude has been dominated by the playoff between tight supply and struggling demand. WTI (US crude) has kept a bearish bias throughout the second half of the year but the move has flattened out over the last 3 months, which has shortened the length of the pullbacks. Because of this, WTI has been trading in a horizontal channel between $75 and $93 per barrel suggesting the move higher may continue to gather momentum for a few more weeks. That said, so far the rallies have been contained below the 100-day SMA which is now resting around the $87 mark, meaning the upside may be capped within the channel itself. 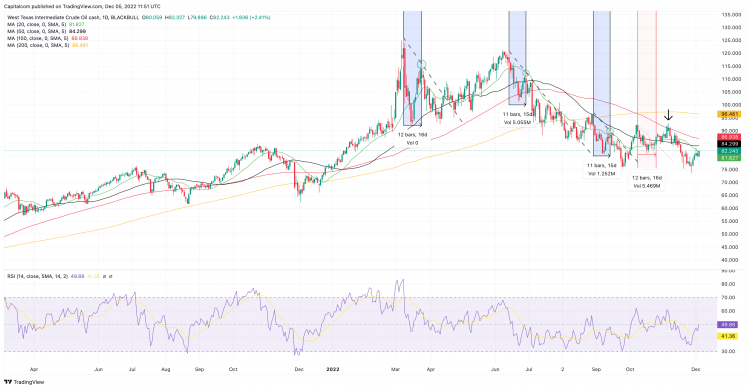 This week's key event for the Canadian dollar will be the Bank of Canada (BOC) meeting on Wednesday. Markets are weighing up the likelihood of another 50bps rate hike as inflation remained unchanged in October at 6.9%, with implied pricing showing 32bps for the December meeting and a peak rate of 4.32% in March 2023. This means that there is still a gap between the market pricing and a potential 50bps hike, opening up the possibility of a CAD rally on the day of the event.

If the bank does raise the rate by 50bps it will take the rate to 4.25%, widening the policy divergence between the Fed and the BOC, which will keep USDCAD under pressure. But the BOC is likely considering downsizing its rate hikes as the risk of overshooting and triggering a recession becomes more prominent with every hike.

In fact, the bond market is starting to flag the risk of recession as yields on longer-term bonds are trading below those on shorter-dated bonds. The 10-year yield is almost 100bps below the 2-year yield, its deepest level of inversion since 1994. Many use this curve as a key recession indicator. 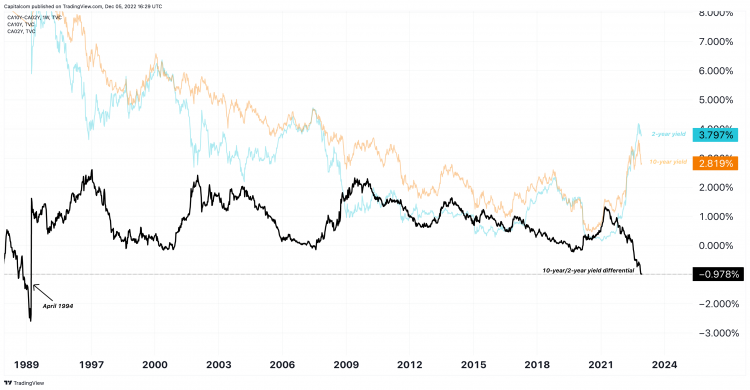 Because of this, markets are leaning slightly in favour of a 25bps hike on Wednesday. Recent data has started to show consumer spending has started to slow Canada’s employment report for November showed that the labour market remains tight,  with the unemployment rate dropping to 5.1% from 5.2% in October, while gross domestic product grew at a yearly rate of 2.9% in the third quarter.

CAD/JPY was the worst-performing currency pair last week as the CAD weakness was met with JPY buying on rumoured policy change talks amongst Bank of Japan (BOJ) members. The pair has dropped almost 10% since its top in October as the Canadian dollar has remained sensitive to weakening economic data in Canada and the US, as well as softening oil prices.

The move lower over the past 3 weeks seems slightly overdone as the RSI depends into oversold territory but remains bearish in the short term. A potential CAD rally on a hawkish BOC could propel CAD/JPY back above 102 but buyers are going to struggle to keep the upper hand as long as the pair is below its 200-day SMA (103.195). The move lower still has some wiggle room once it breaks below the 100 mark and the ascending trend line from September 2021 (red dashed line) may come back into play, offering support around 98 - 97.24. 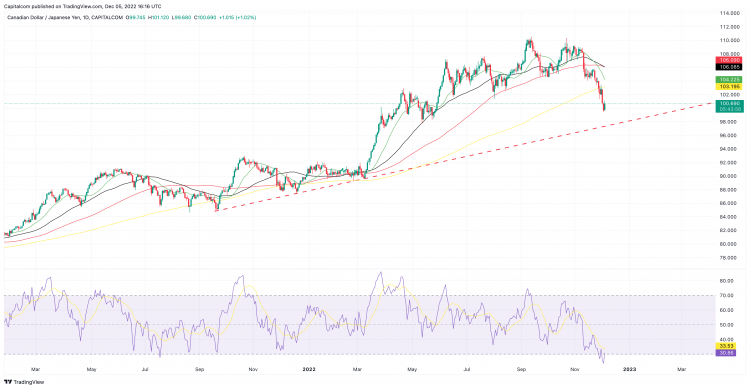 EUR/USD 1.08948
Trade
+0.250%
USD/JPY 130.290
Trade
+0.360%
GBP/USD 1.23835
Trade
-0.100%
AUD/USD 0.70759
Trade
-0.460%
GBP/JPY 161.340
Trade
+0.230%
The difference between trading assets and CFDs
The main difference between CFD trading and trading assets, such as commodities and stocks, is that you don’t own the underlying asset when you trade on a CFD.
You can still benefit if the market moves in your favour, or make a loss if it moves against you. However, with traditional trading you enter a contract to exchange the legal ownership of the individual shares or the commodities for money, and you own this until you sell it again.
CFDs are leveraged products, which means that you only need to deposit a percentage of the full value of the CFD trade in order to open a position. But with traditional trading, you buy the assets for the full amount. In the UK, there is no stamp duty on CFD trading, but there is when you buy stocks, for example.
CFDs attract overnight costs to hold the trades (unless you use 1-1 leverage), which makes them more suited to short-term trading opportunities. Stocks and commodities are more normally bought and held for longer. You might also pay a broker commission or fees when buying and selling assets direct and you’d need somewhere to store them safely.
Capital Com is an execution-only service provider. The material provided on this website is for information purposes only and should not be understood as an investment advice. Any opinion that may be provided on this page does not constitute a recommendation by Capital Com or its agents. We do not make any representations or warranty on the accuracy or completeness of the information that is provided on this page. If you rely on the information on this page then you do so entirely on your own risk.