US dollar: greenback is King

The September FOMC meeting delivered a new 75 basis point hike, the third consecutive of this magnitude, bringing Fed funds rates into a range of 3 to 3.25%, with Chair J Powell signaling additional hikes and a "painful" path to bring inflation back to 2%. Following the Fed's announcement, the US dollar index (DXY) climbed to its highest point since June 2002, crossing the 111-point mark, and currently settling above 113.

In its new economic projections, the Fed lowered its previous June forecasts for economic growth in 2023, while raising estimates for both inflation and unemployment, and predicting that interest rates will reach 4.6% next year

As a direct consequence of this, the Federal Reserve will keep its monetary policy extremely tight for an extended period of time in order to accomplish its objective of achieving price stability.

This will probably continue to increase the appeal of the dollar in the forex market as interest rate differentials widen and risk aversion increases on global markets.

Speaking about the DXY forecast, is the US dollar index now on track to hit the highs of July 2001 at 121?

US dollar: greenback is King 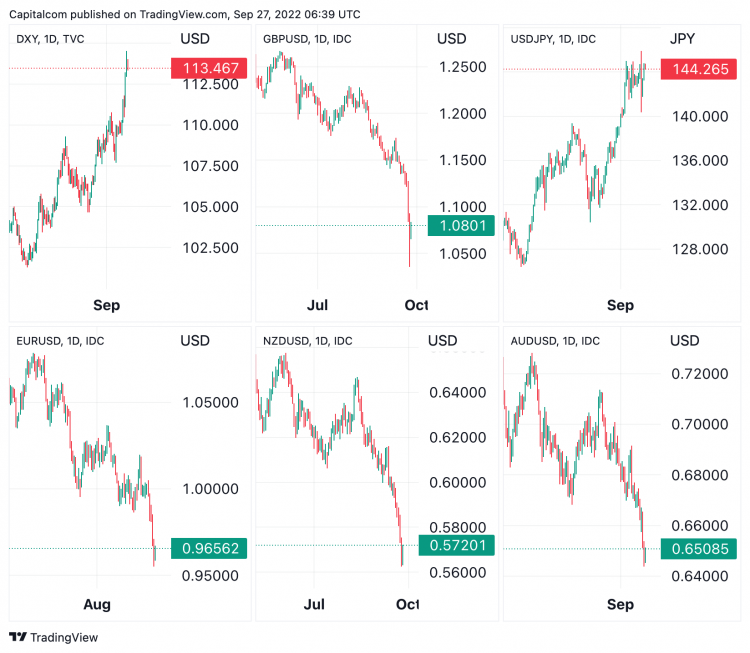 On the foreign exchange market, the value of the United States dollar is currently at multi-year highs when compared to its major peers.

Thus, interest rates in the US will continue to rise sharply and are expected to remain well above inflation projections through 2023, 2024, and 2025. This suggests the Fed will maintain its current course of extremely tight monetary policy over the next few years.

Regarding the implication for the dollar, the Federal Reserve's "Whatever it takes" strategy to reduce inflation to 2% is a clear supportive factor for the USD.

In the absence of an explicit shift in the Federal Reserve's stance, the greenback can continue to benefit from the path of rising interest rates.

Additionally, the "painful path" taken by Fed Chair Jerome Powell to lower inflation to around 2% while raising unemployment and reducing growth runs the risk of increasing risk aversion on global markets and boosting demand for safe-haven assets like the dollar. 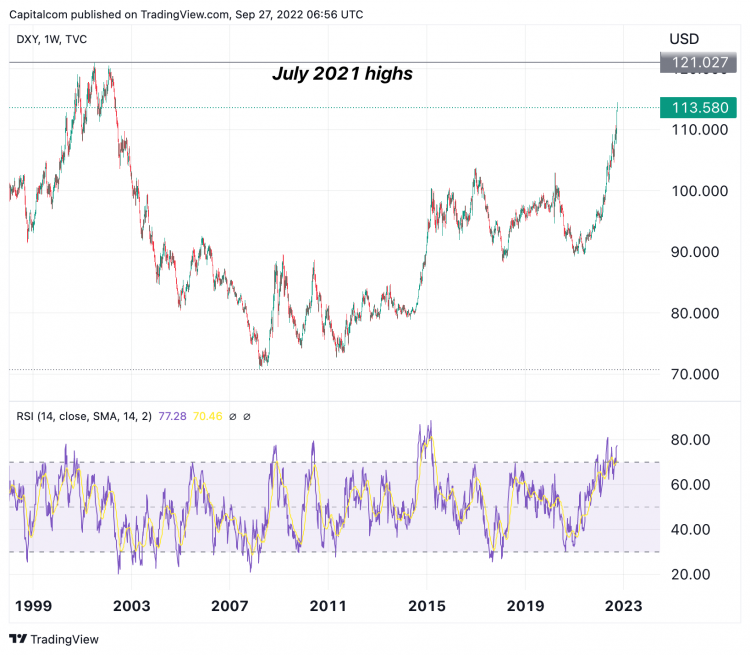 Looking at the weekly DXY chart, the next major resistance level is 121, which represents the July 2001 highs and is currently 9% above current prices.

But what were the economic conditions that drove the greenback to such highs back then?

In other words, it wasn't a hawkish Fed that pushed the DXY to 121 in the early 2000s, but rather a global risk-off and recession fears.

The US economy experienced a hard landing as the dot-com bubble burst and stock market indices, such as the broader S&P 500 (US 500) and the tech-heavy Nasdaq (US 100) plummeted. 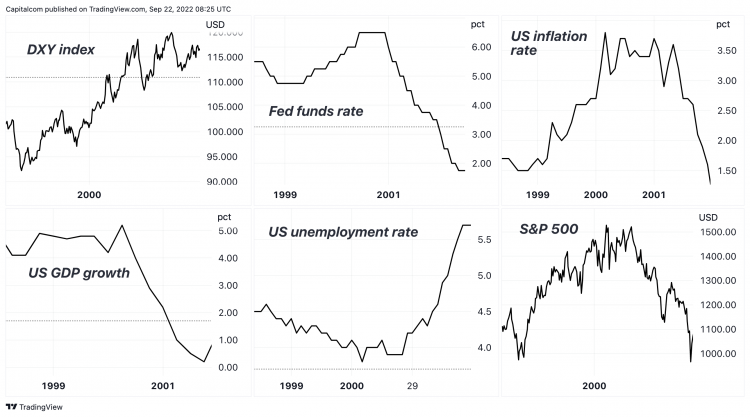 Therefore, the next leg of the greenback's appreciation over the coming months may be fueled more by recession risks and rising risk aversion in equity markets.

It won't be a straight line ahead for the dollar. Rising unemployment, falling inflation, and slowing growth all point to a bumpy ride ahead as the market speculates on the Fed's potential dovish turn.

The more the Fed keeps monetary policy tight and real yields in the positive range while the economy is already shrinking, the more likely it is that the dollar will reach its early 2000s highs at 121.