Will the Turkish lira go up or down?

Turkish lira forecast: Can TRY stabilise or will it shed further value?

The Turkish lira dropped to its lowest level since the December 2021 crash, ahead of a meeting of the Central Bank of Turkey (CBT) where it held interest rates stable despite a 70% inflation rate.

The lira has lost another 15% year to date against the US dollar after plunging by 46% in 2021, driven by President Tayyip Erdogan's unconventional views on addressing inflation by cutting interest rates rather than lifting them.

Is there a trading opportunity for foreign exchange (forex) investors in going long or short on the lira following the latest fall against the dollar? In this article we look at the lira’s performance and analysts’ expectations.

The Turkish lira started 2021 at around 7.37 against the US dollar and steadily shed value throughout the year. The USD/TRY rate fell to 9.69 at the end of October, and then dropped to a record low, reaching 16.42 on 12 December.

“The seeds for the ongoing lira crisis were sown when CBT governor, Sahap Kavcioglu, launched an unconventional monetary policy experiment, attempting to cure high inflation by lowering interest rates. They were not sown by Turkish households spontaneously deciding to move towards FX deposits instead of their domestic currency,” wrote Tatha Ghose, FX and emerging markets (EM) analyst at Germany’s Commerzbank in a recent TRY analysis.

“Cutting rates is President Tayyip Erdogan's now familiar view of how monetary policy should work. CBT attempted to find conventional justifications for rate cuts, such as inflation was high because of transitory factors and that core inflation was lower than observed headline inflation. But such arguments do not make sense because even the core inflation rate is many multiples of the inflation target, and this has been the case for a decade (nothing related to recent transitory factors) – other central banks would not dream of lowering interest rates against such a backdrop,” Ghose added.

Turkey’s central bank held the country’s key interest rate unchanged at 14% on Thursday, 26 May, having cut rates by 500 basis points since September as inflation hit 20-year highs. The currency crisis is now coinciding with rising prices for energy and other commodities driven by the Russia-Ukraine conflict, further exacerbating inflation by driving up the cost of Turkish imports.

“All in all, we see a pronounced TRY weakness in recent weeks and pressure on reserves with a US$7.4bn decline (in gross reserves) despite continuous FX purchases through the FX-protected deposit scheme and FX surrender requirements. Inflation, on the other hand, maintained a rapid uptrend with risks tilted to the downside given the broad-based deterioration in price dynamics with a largely supportive policy framework and the Russia/Ukraine war pressuring import prices,” Muhammet Mercan, chief economist for Turkey at Dutch bank ING, wrote on Thursday.

“While the current outlook requires a significantly tighter monetary policy stance, the CBT does not signal a shift in the near term, remaining mute again in May and signalling the continuation of the same policy line.”

Will the Turkish lira go up or down?

The value of the lira is weakening at a time of particular strength in the value of the US dollar. The US dollar index (DXY), which measures the dollar against a basket of currencies, climbed to a near 20-year high on 12 May.

The USD/TRY exchange rate moved to the 11 level in late December as the lira attempted to rebound from the crash, but has resumed its decline in 2022, with the pair returning to the record 16 level.

Per Hammarlund, chief EM strategist at Swedish bank SEB, wrote on 11 May that “rising US and global interest rates in combination with slowing growth is a toxic brew for EM risk appetite in general and for Turkey in particular… With elections looming in June 2023, Erdogan will prioritize growth over inflation, which will keep building the pressure on the lira.”

The EUR/TRY currency pair moved from the 9 level at the start of 2021 to 18.45 in the December collapse. The rate moved back to 12.07 as it attempted to rebound, but the recent lira weakness has moved the back to 17.52. The EUR/TRY rate moved up by 12.10% over the past four weeks and 69.22% over the past year. The pair has not matched the December high because the euro has since come under pressure from the impact of the Russia-Ukraine conflict on the region’s energy supply, which has raised the spectre of recession.

The GBP/TRY pair moved from the 10 level at the start of 2021 to 21.73 in December, moving back to 14.26 before the lira resumed its decline. The pound sterling gained 11.05% against the lira over the past month and 70.98% over the past year. The GBP/TRY rate traded up to 20.72 on 26 May – as with the euro rate, pound sterling has come under pressure this year, preventing the same performance as the US dollar in matching the December level.

What is the outlook for the Turkish currency given the country’s monetary policy path and the international macroeconomic backdrop? We look at the latest Turkish lira future predictions from analysts below.

Turkish lira forecast: Can TRY stabilise or will it shed further value?

“The lira exchange rate has temporarily stabilised after the government and central bank launched rescue measures, such as incentives to convert FX deposits to lira deposits and forced conversion of export earnings in order to increase dollar supply in the market. The approach is called ‘liraization’ of the economy,” Ghose wrote. “These policies do not address the core problem of inconsistent monetary policy and non-credible central bank. Already there are media reports that banks are having to intervene in FX to hold up the lira... After a brief pause, we anticipate the next big move in USD-TRY.

“We anticipate pressure to return to the exchange rate over the coming two quarters, which will likely create more stress for the financial system and the central bank, ultimately forcing at least an interim reversal via emergency rate hikes. Ultimately, though, rate hikes by CBT under the current policy framework will not be credible and the lira will likely establish a renewed depreciation path through 2023. Precisely when and how this policy experiment will be abandoned remains completely unclear.”

What is your sentiment on EUR/TRY?

Start trading
or
Try demo
Hammarlund also expects the lira to fall further, noting: “In the coming weeks, we expect either the depreciation of the lira to accelerate, or some form of action by the CBRT or government to stabilize the currency (perhaps a tax or interest rate incentive to buy TRY). With the current account deficit widening, inflation at 70%, and the REER rising, stability in USD/TRY is unsustainable.”

SEB’s Turkish lira prediction anticipated the USD/TRY rate could reach 18.50 before the end of the second quarter.

“The combination of rising inflation, higher inflation expectations, static monetary policy that is keeping real rates deep in negative territory, and external financing pressures, is starting to bite for currency traders. Although policymakers have shown increased appetite for a weaker lira in the past year, the recent depreciation still increases the risk of capital controls being tightened,” analysts at Monex Europe wrote in their daily report on 25 May. 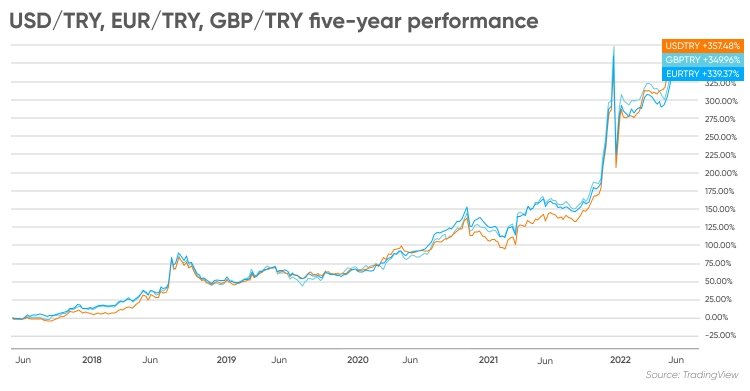 Analyst consensus indicated that there could be a scope for further weakness in the value of the Turkish lira.

The Turkish lira exchange rate forecast from Danske Bank was the most bearish, predicting that the USD/TRY rate could reach 20 in 12 months’ time. ING predicted that it could take longer to reach that level, with the rate hitting 20 in the fourth quarter of 2023 in its forecast and reaching 23 by the fourth quarter of 2024. Monex Europe, on the other hand, saw the potential for the rate to move to 14.50 in a year’s time.

Commerzbank saw the lira also continuing to shed value against the euro in its TRY forecast. The bank expected the EUR/TRY rate to reach 20.34 in the third quarter and 20.88 in the fourth quarter, before rebounding to 17.92 by the fourth quarter of 2023.

When looking for Turkish lira future predictions, it’s important to bear in mind that analysts’ forecasts can be wrong. Analysts’ expectations are based on making a fundamental and technical study of the currency pairs’ performance. However, past performance is not a guarantee of future results.

Do your own research and always remember your decision to trade depends on your attitude to risk, your expertise in this market, the spread of your portfolio and how comfortable you feel about losing money. And never trade more money than you can afford to lose.