Your guide to trading the GBP/JPY pair

Why is the GBP/JPY an important market?

The currency pairing of the British pound / Japanese yen (GBP/JPY) is one of the most traded pairs in the foreign exchange market, representing a significant quantity of daily trading. It's a pairing which is popular amongst veteran traders and newcomers alike.

Find your favourite currency pair with the world's largest selection of forex markets at Capital.com.

The forex market is available 24 hours a day, but UK trading, in particular, tends to get active from 8:00 AM and taper off from 5:00 PM. Of course, there will be times during the day when this currency pair experiences higher volumes - typically around major market announcements.

In the following sections, we're going to take a look at the history of the pound and Japanese yen, what factors can influence its movements over time, and why exactly sterling to yen (GBP/JPY) trading remains so popular.

To begin our overview of the pound and the Japanese yen we're going to explore the history behind both of these currencies.

The pound sterling dates all the way back to around 775. It evolved into its current, modern form following decimalisation in 1971. Currently, it is the fourth most-traded currency across the foreign exchange market and represents a significant amount of daily trades all around the world.

The yen was officially adopted in 1871 by the Meiji government, and as such has a more complex and rich history in comparison to some of the relatively newer currencies around the world. Since inception, the value of the yen has grown considerably and this is, in large part, due to the strong Japanese industrial complex. A thriving industry consisting of technological developments, agricultural innovation, and a range of exportable products have all historically helped the yen. 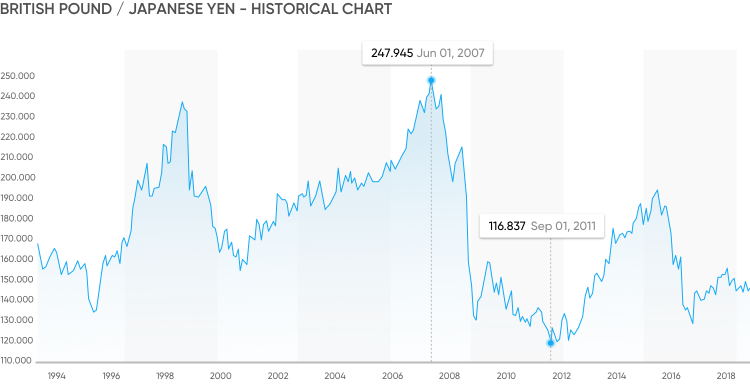 A significant factor which affects the value of GBP is the overall performance of the economy across the United Kingdom. There are three gross domestic product (GDP) reports which are released, as follows; Preliminary GDP, Revised GDP, and Final GDP.  Traders and investors will follow these reports when trying to determine the future movement in the market.

The price of the pound sterling is also impacted by monetary policies enacted by the Bank of England (BOE). Whenever the BOE deem inflation to be rising too quickly they will utilise monetary policy tools to try to control the rise. During these procedures, interest rates can rise, which is another factor that traders consider when analysing the market and possible future direction for the GBP-JPY pairing.

The Bank of Japan (BOJ) and other financial institutions release regular reports regarding interest rates and other economic data, which traders look towards when trying to determine future price movements. These figures are especially useful for figuring out possible movements in the GBP/JPY exchange rate.

As Japan is such a small country – in comparison to other big players in the foreign exchange market – events such as national and natural disasters can also play a part in affecting (or destabilising) the currency and its rates.

How to trade GBP/JPY CFDs

An individual can trade GBP/JPY with either a forex contract or alternatively, they can trade a contract for difference (CFD) on a particular currency pair, and speculate on the price difference.

For instance, to trade the GBP/JPY currency pair using CFDs, you speculate on the direction of the underlying asset. If you think the pound will appreciate then take a long position by buying the CFDs. If you think the pound will lose value against the Japanese yen then you would take a short position by selling CFDs. CFDs facilitate short-selling, allowing everyone to trade regardless of their GBP/JPY trading strategy.

Trade CFDs on GBP/JPY with Capital.com. Sign up at Capital.com to use our desktop platform, or download our mobile app to start trading on the most popular global markets anywhere, anytime.

Why trade GBP/JPY CFDs with Capital.com

Trading on margin: providing trading on margin (20:1 for non-major forex pairs), Capital.com gives you access to the GBP/JPY pair with the help of CFDs.

Trading the difference: by trading CFDs on GBP/JPY, you speculate on the rise or fall of its price. CFDs trading is no different from traditional trading in terms of its associated strategies. A CFD trader can go short or long, set stop and limit losses and apply trading scenarios that align with his or her objectives.

All-round trading analysis: the browser-based platform allows traders to shape their own market analysis and forecasts with sleek technical indicators. For instance, a trader could choose to have GBP/JPY analysis and forecasts as a big part of their feed. Capital.com provides live market updates and various chart formats, available on desktop, iOS, and Android.

For somebody new to the world of the foreign exchange market, it can seem like an intimidating place. However, once you've grasped the basics,  trading on Forex is actually quite similar to other markets. There are just a few key differences.

Because there is no central exchange and it is a market driven by the world’s large financial institutions, the volumes can be huge in comparison to other markets. Not only does this lower the overall cost to traders but it also makes entering and exiting trades easy.

A pip is merely the smallest increment of trade in the foreign exchange market. It stands for 'percentage in point.' GBP/JPY is quoted to two decimal points, so a pip is just the lowest amount that can possibly be added to (or subtracted from) this figure.

The simple answer is 'no' – we at Capital.com make money through the bid-ask spread. This is different from traditional trading where a broker would earn commission on every buy and sell that the customer takes part in.