Your guide to trading the EUR/GBP pair


Why is EUR/GBP important to traders?

As two of the most prominently traded currencies, the EUR/GBP pairing is extremely popular in global financial markets. With excellent liquidity and a high volume of continuous trade, it's no wonder that so many people trade EUR/GBP.

There is much more to the euro/British pound pairing than an exceptional level of liquidity. We're going to explain in-depth in the following sections why EUR/GBP trading is such an active and exciting market.

Theoretically, you can trade forex pairs 24/7, but there are prime times to trade the EUR/GBP when the currency pair is more volatile. The EUR/GBP is generally busy between 06:00 and 16:00 (GMT).

To fully understand this pair – and why many choose to trade EUR/GBP over other currencies – we will first explore the origins of these two, how they came to be, and the euro sterling history.

As a relatively new currency, the euro has come a great way from its first inception. Originally introduced as a completely digital currency towards the end of the 20th century, the euro is now the national currency for a large proportion of the European continent.

The euro hasn't had a completely successful history, though. After the US sub-prime mortgage crisis, Europe experienced its own recession, and the euro experienced several large price swings as political and economic events buffeted the currency.

The origins of the pound sterling date back centuries to around 775. Of course, it wasn't decimalised until 1971. At the moment, it is currently the fourth most-traded currency in the foreign exchange market and represents a significant portion of trades across the globe.

Past events which affected the rate of the pound sterling include: the depreciation of the US dollar in 1965 affecting GBP rates; the UK exiting the Exchange Rate Mechanism in 1992, and in 2001, when prices fell once again as the dot-com bubble of the 90s finally burst. 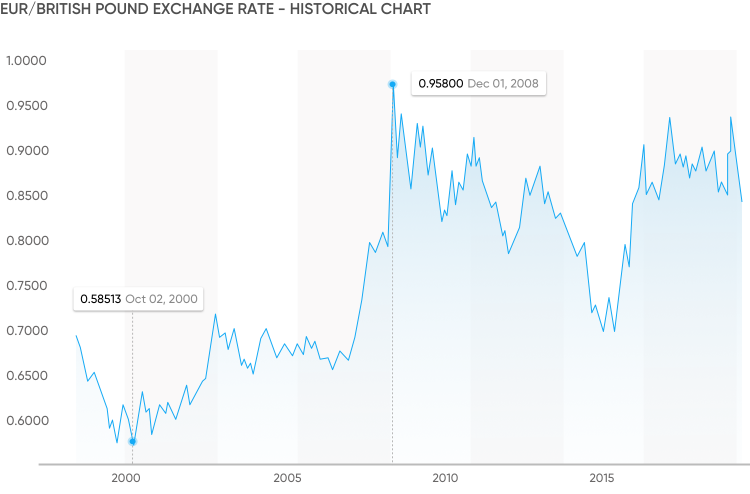 As highlighted in the previous section, recessions and economic crises can have a massive influence over the oscillating prices of currencies. In these next two subsections, we're going to explore what major factors out there play a role in euro pound trading, and how these factors can affect the strategies in use by traders and investors.

One of the key influencing factors on the euro to pound sterling rate is interest rates. Because of this, the European Central Bank (ECB) is one of the main financial institutions which traders and investors will closely follow.

Each month the ECB will release reports which provide data on the future economic outlook and the levels of interest rates throughout Europe. Utilising these figures, investors and traders will try and forecast what impact this will have on the euro pound price in the market.

One other major factor which plays a large role in the movement of EUR to GBP rates is economic data, such as the employment figures across Europe. These consolidated figures are freely available and have played an important part in EUR/GBP history.

The price of the pound sterling is affected by a large number of factors, the largest of which would probably be monetary policies enacted by the Bank of England (BOE). For example, whenever the BOE deem inflation is rising too quickly, they can utilise monetary policy tools to try and control this. These changes in interest rates are something that traders and investors keep a close eye on.

The overall performance of the economy across the United Kingdom also affect currency values immensely. There are three gross domestic product (GDP) reports which are released: preliminary GDP, revised GDP, and final GDP. All of these are important as an indication of the economic health of the UK and will be watched by both traders and investors.

How to trade EUR/GBP

In the next two subsections, you're going to discover why traders and investors around the world choose to take part in EUR/GBP trading and why CFDs (contracts for difference) on forex are one of the most popular options for doing so.

Looking for a reliable CFD trading provider? If so, just spend 3 minutes of your time to sign up and start trading CFDs EUR/GBP with Capital.com. Try our award-winning trading platform or download our mobile app, which will become your smart CFD trading assistant.

The choice to trade on the EUR/GBP pairing isn't an especially difficult one, but how exactly to go about it is definitely something that can cause some confusion. Thankfully, the option to trade via CFDs almost entirely eliminates many of the worries that people have, because of how easy the process is.

CFDs are essentially just a form of derivative trading and have proven to be very popular with investors and traders around the globe. They offer the ability to trade speculatively on currency pairings like EUR to GBP. Because you don't actually have to own the currencies themselves, you can speculate long or short-term on the future price direction, as a way of trying to profit from the rise and fall of the euro to pound rate and a variety of other currencies.

Why trade EUR/GBP CFDs with Capital.com?

Trading the difference: By trading CFDs on EUR/GBP,  you speculate on the rise or fall of its price. CFDs trading is no different from traditional trading in terms of its associated strategies. A CFD trader can go short or long, set stop and limit losses and apply trading scenarios that align with his or her objectives.

All-around trading analysis: The browser-based platform allows traders to shape their own market analysis and forecasts with sleek technical indicators. For instance, a trader could choose to have EUR/GBP analysis and forecasts as a big part of their feed. Capital.com provides live market updates and various chart formats, available on desktop, iOS, and Android.