The meeting of the Swiss National Bank (SNB) on Thursday, September 22, will be one of the most important market events of the week, other than the FOMC meeting.

The last time the SNB met was in June, when it unexpectedly announced a 50-basis point hike while the market expected rates to remain unchanged, thereby adopting a decidedly hawkish stance and bolstering the Swiss franc (CHF) throughout the summer.

I expect the SNB to continue hiking rates aggressively in September, at least by 75 basis points. However, given that the next SNB meeting will be in December, a full percentage point increase in September cannot be ruled out in order to catch up with other major central banks.

These data give the SNB the go-ahead to raise rates in a decisive manner, also taking into account the Fed's hawkish trajectory.

Together with rising global risk aversion and higher political risk stemming from Italian elections, a supersized SNB rate hike could serve as a near-term catalyst for a CHF rally.

How did the Swiss franc (CHF) perform against other currencies in 2022? 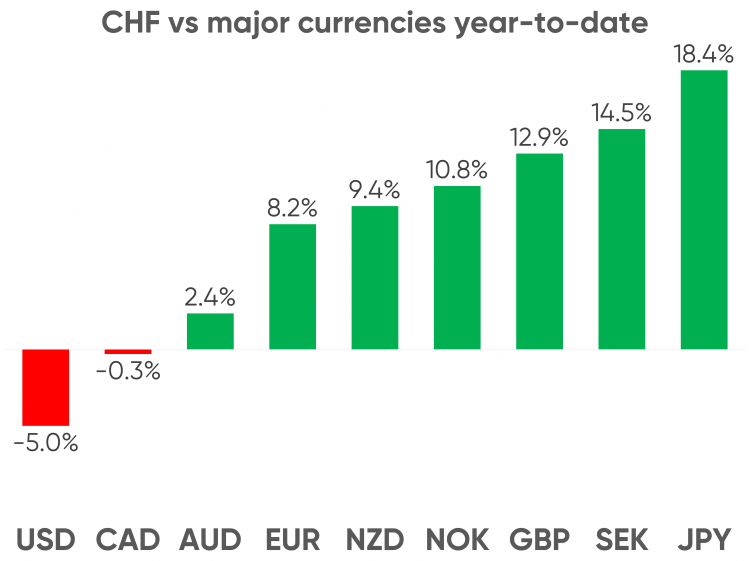 The CHF has appreciated against every major peer year-to-date, except the US dollar (USD/CHF) and the Canadian dollar (CAD/CHF).

The franc has performed best against the Japanese yen, with the pair (CHF/JPY) up 18% year-to-date, amid widening rate divergences.

As a result of the inflation crisis and the dismal state of the British economy, the pound has fallen in value relative to the Swiss franc (GBP/CHF) by nearly 13 percent.

The euro was also particularly weak against the Swiss franc in the first nine months of the year, with the EUR/CHF pair falling from 1.08 to 0.95.

What is your sentiment on USD/CHF?

Give USD/CHF a try 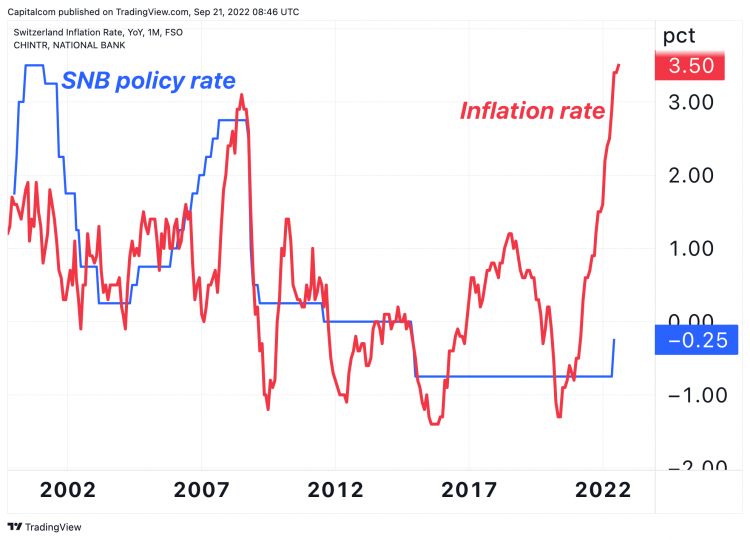 The shift in the Swiss franc's performance over the course of the summer was caused not only by the general risk-off mood, which tends to favour flows to safe-haven currencies like the CHF, but also and most importantly by the SNB's hawkish stance.

The SNB raised interest rates from -0.75% to -0.25% in June, surprising the market, which had expected rates to remain unchanged. It was the first rate increase since 2007, and the SNB also stated that it is prepared to intervene in the foreign exchange market if necessary to counteract the franc's weakness.

The SNB's June policy statement clearly demonstrated hawkishness among board members, and we can expect the SNB to continue delivering aggressive interest rate hikes for the following reasons.

First of all, inflation continue to rise in Switzerland. The annual inflation rate increased to 3.5% in August 2022, exceeding market expectations and the previous month's figure of 3.4 percent, marking the highest rate of inflation since August 1993.
However, the unemployment rate continued to remain at very low levels in Switzerland, coming in at 2% in August, the same as in the prior three months, which was the lowest reading since November 2001.

Strong inflation, which remains above the 0-2% target,  and a solid labour market give the SNB the go-ahead to raise rates forcefully.

On top of that, we have other global central banks, the Fed but also the ECB, leaning towards supersized rate hikes in the coming meetings. Pressure from other central banks, as well as the risks posed by widening rate differentials, particularly with the dollar, force the SNB to deliver front-loading hikes. This is also dependent on the fact that the next SNB meeting will take place in December, while both the Fed and the ECB will meet in the interim.

The market is pricing in an SNB hike of 80 basis points, effectively discounting a 75bps hike. Given the Fed's pressure today, I would lean more toward a full percentage point increase by the SNB, owing to the upside risks to inflation in Europe.

A large rate hike by the SNB, combined with rising risk aversion due to recession fears and higher political risks in Europe as a result of the Italian elections this weekend, may represent positive short-term catalysts for the CHF. 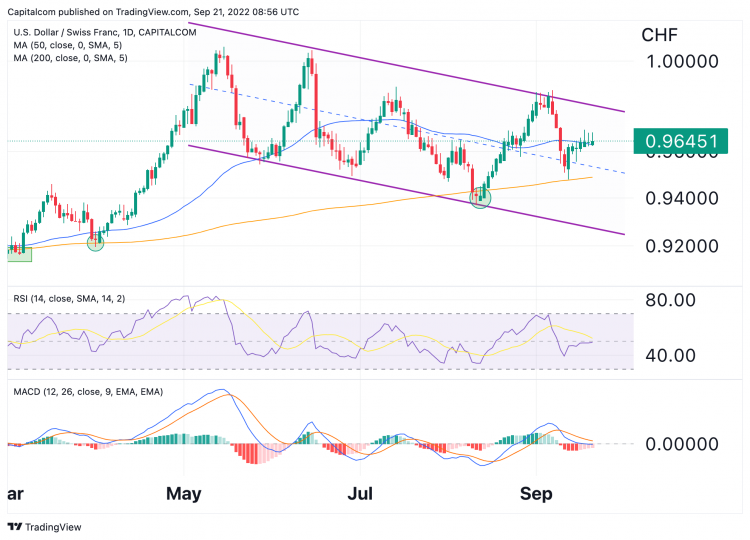 Over the past 5 months, the dollar-Swiss franc (USD/CHF) pair has gone up and down, but it appears to have settled into a descending channel. However, the bearish forces are still not that dominant, in this market phase.

Over the past year, the 200-day moving average (dma) has provided strong support to the pair, with only a brief false breakdown in August that was then invalidated by a bullish price action. On September 13, we witnessed a strong bullish price action exactly at 0.948, where the 200-dma is located.

Thus, 0.948 (200-dma and 13 September lows) provides the closest support, followed by 0.937 (11 August lows). At the end of September, the channel line points to 0.925. Such a drop in USD/CHF would be quite sharp and rapid, and it would be consistent only with a dovish Fed/hawkish SNB outcome.

On the upside, there is significant resistance at 0.97, but if this level is breached, 0.98 (main trendline) is the next target.

The euro-franc (EUR/CHF) price chart is visibly more bearish than USD/CHF. Here, the bearish trendline from June 2022 continues to act as a strong, dynamic barrier for the pair.

EUR/CHF is currently testing multi-year lows at 0.953. The last time the euro/Swiss franc exchange rate was this low was in January of 2015.

The relative strength index (RSI) is currently moving towards south, and the moving average convergence divergence (MACD) showed a bearish crossover on September 13.

Despite reaching its lowest levels in nearly 8 years, it is difficult to believe that the euro is now trading at an attractive valuation against the franc, given the rising economic and political risks in the Eurozone.

Taking into account the bleak macro picture that is emerging on the horizon, the risks arising from the elections in Italy, and the unsolved geopolitical uncertainties in Ukraine, the demand for the Swiss franc will likely be very hot in the weeks to come.

Italian elections: How might they affect the FTSE MIB and the euro?