When Iain Macleod, a UK Conservative MP, coined the term "stagflation" in 1965, no investor at the time could have predicted that stocks wouldn't beat inflation for the rest of the 1970s and most of the 1980s.

About forty years later, stagflation has made its great comeback.

Inflationary pressures, once confined to energy price increases due to the spectacular recovery in oil demand following the reopening from Covid-19 restrictions, are now widespread across the entire consumer basket in many countries around the world, while economic growth shows the first signs of slowing as a result of the impact of the Ukraine war and the end of ultra-easy monetary policy.

With the US stock market (US 500) officially entering bear market territory in June 2022, the US dollar (DXY) strenghtening year-to-date and gold holding relatively steady despite three Federal Reserve's interest rate hikes, investors are wondering how to invest during stagflation and which are the best investments to own in 2022. 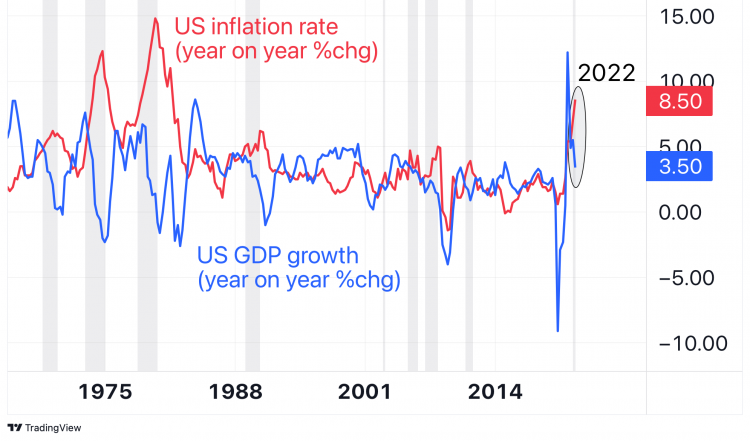 Before understanding how to invest in stagflation, it is necessary to first have a better knowledge of what stagflation really is.

Stagflation is defined as a period of low or sluggish economic growth combined with elevated inflation. Essentially, the economy's output either does not increase or declines, while consumer prices continue to rise significantly.

Economic indicators such as real gross domestic product (GDP) growth and consumer price index (CPI) inflation are crucial indicators for determining the presence of stagflation in the economy. When the GDP growth rate falls below the CPI inflation rate, it may indicate that the economy is already experiencing stagflation.

Many economists thought stagflation was an inconceivable scenario until the 1970s, when the world was unexpectedly hit by two big oil crises, leading to a spike in inflation and a halt in economic growth.

On November 17, 1965, a Tory MP, Ian Macleod, first coined the word "stagflation" during a parliamentary debate in the Commons Chamber.

We now have the worst of both worlds — not just inflation on the one side or stagnation on the other, but both of them together. We have a sort of "stagflation" situation and history in modern terms is indeed being made.
by Tory MP Ian Macleod who first coined the term "stagflation" in 1965

The two most severe episodes of stagflation occurred in the mid-1970s and at the turn of the 1970s and 1980s. But the world is facing once again a return of stagflation in 2022, owing to the worst inflation in forty years and lower economic prospects due to rising interest rates and the effects of conflict between Russia and Ukraine.

In its latest Global Economic Prospect, the World Bank warned against the heightened possibility of stagflation by raising inflation forecasts and cutting the growth rate of the global economy.

Investing in stagflation: gold stands out as a clear winner among major asset classes

Gold was the best performer among major asset classes during stagflationary times, according to an analysis conducted by the World Gold Council, which takes into account the period between 1973 and the end of 2021. annualised and inflation-adjusted performance on average.

Gold posted a 32.2% average annualized inflation-adjusted performance during stagflation, followed by the S&P GSCI index (+17.5%), which is a broad commodity index that is  energy commodities such as oil, natural gas, gasoline.

The US stock market (US 500) was among stagflation's favourite victims, delivering negative returns (-6.6%) during this phase, while stock markets in advanced countries outside the US fared even worse (-11.6%). The dollar (DXY) has been rather stable during the whole time period. 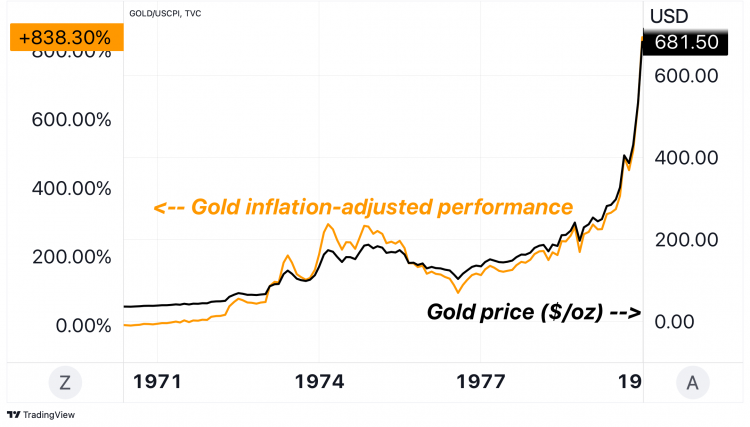 During the 1970s stagflation, gold had a decade of stellar returns. The yellow metal prices soared from $35 per ounce to a high of $681 per ounce in January 1980.

Adjusting its performance for inflation, which means, taking into account the change in the Consumer Price Index (CPI) during the same time period, gold's real growth was 838.3%. Thus, gold appears to have been a particularly successful hedge against the economic instability and the spike in US inflation during the 1970s.

But why does gold tend to rise during stagflationary periods of high inflation and low economic growth?

Because gold has historically remained uncorrelated with the stock or bond markets, investors flock to it as a safe haven asset during times of economic turmoil.

Investing in safe government bonds, such as US Treasuries, may not ensure positive real returns in times of high inflation, whereas in times of sluggish economic growth, corporate earnings tend to fall and stock performance tends to decline.

Because gold is a tangible object with a limited supply, thus its real value cannot be continuously diluted, as money printing does with banknotes.

The stock market and stagflation: Why positive real returns were a mirage in the 1970s

During the two stagflationary episodes of the 1970s, the stock market – as defined by the S&P 500 index (US 500) – failed to beat inflation.

In nominal terms, the S&P 500 registered minimal gains over the course of the decade, with the price rally beginning in the early 1980s when inflation began to decline significantly after Fed Chair Paul Volcker’s campaign to raise interest rates to 20%.

When inflation is taken into account, the S&P 500 showed a negative performance of about 40%, which was almost entirely caused by the rise in the CPI index during the same time period.

The poor real performance of the S&P 500 index during the 1970s was due to stagnant economic growth (the US had two recessions) and rising inflation.

Stagflation and the US dollar: Why the greenback tumbled in the 1970s 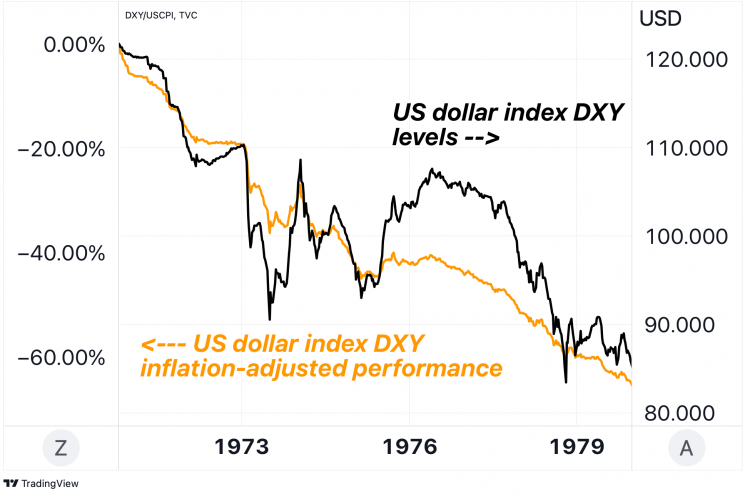 Cash is not king in times of high inflation, and therefore also in stagflation, due to the constant erosion of the purchasing power of money. This is what happened to the US dollar during the great stagflation of the 1970s.

The DXY index, which measures the dollar's performance against a basket of six major currencies, had negative absolute returns in the 1970s, which were further exacerbated by the negative effect of inflation.

The DXY moved from 121.5 at the start of the 70s to 85 in the beginning of the 80s, recording a nominal performance of -30%. However, if we also take inflation into account, the DXY index lost 65% of its real value.

The decade of the 1970s was marked by not one but two major energy crises that affected the whole world.

The OPEC nations announced an oil embargo on the US and other industrial countries in October 1973 for supporting Israel during the Yom Kippur War. The embargo, which lasted until March 1974, occurred at a period when US oil production had reached its peak and when Middle Eastern nations dominated the global oil market.

Oil prices experienced a second major shock at the end of 1978, as a result of an Iranian oil workers' strike and the following Iranian revolution, which led to a significant tightness in the global crude market due to the absence of Iranian crude.

Over the decade, the inflation-adjusted performance of oil prices was around 440%, making crude the second-best performer (behind gold) during the United States' great stagflation.

There are some striking parallels between the present stagflation and the 1970s stagflationary period, but there is also a fundamental and concerning divergence.

To begin with, the inflationary pressures in both situations were caused by global supply shocks affecting energy markets.

Two world oil crises occurred in the 1970s, whereas today we are witnessing an extremely tight energy market, owing to supply shortages that are unable to keep up with the post-pandemic recovery of demand, and, above all, due to an impressive increase in natural gas prices following the war between Russia and Ukraine.

The most significant difference between today and the 1970s is that the Fed is still lagging behind the inflation curve.

The current Fed fund rate is 1.75%, which is way lower than the rate of inflation in the economy. In the 1970s, the Federal Reserve was able to reduce inflation twice despite causing double-digit interest rates and two recessions. In particular, Paul Volcker, who became chairman of the Federal Reserve in August 1979, aggressively addressed the issue, increasing interest rates to a record high of 20% levels.

Is Fed Chair Jerome Powell truly ready to do whatever it takes to combat inflation today? 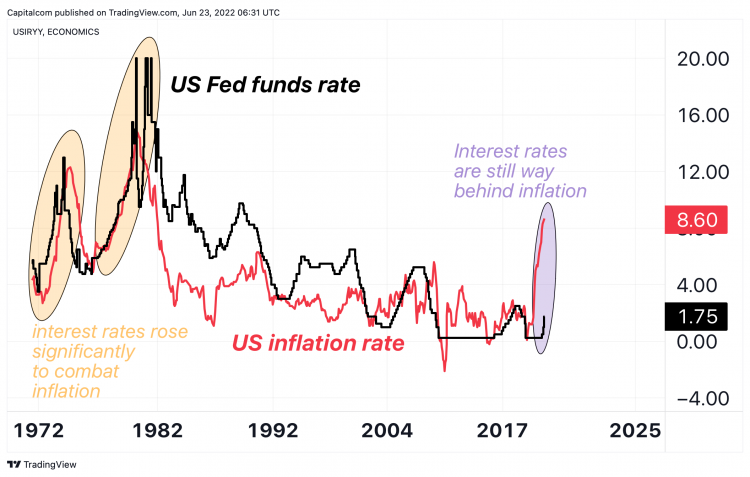 US CPI vs Fed funds with a focus on stagflationary episodes – Photo: Capital.com / Source: Tradingview

Will cigarettes and alcohol stimulate the economy to help investors fight stagflation?

Can gold shine again in the wake of the IMF stagflation warning?

Investing during stagflation: What assets to choose