News and Analysis News Stocks S&P 500 forecast: How will US stocks fare in a recession?
Menu

As Fed chair Jerome Powell puts his foot on the pedal and accelerates quantitative tightening, investors now fear that decreasing money supply will push the US economy into a recession. Analysts remain divided on the likelihood of a recession as they await economic data, which remains key in anticipating the severity of rate hikes in the second half of the year.

S&P Global summed up the current market sentiment in its third quarter US economic outlook report:

“We expect that the Fed raising interest rates and reducing its balance sheet will be enough to eventually begin to tame inflation and help restore real wage strength and purchasing power. The question is whether it will push the US into recession as well.”

In this article, we analyse opinions from market experts on the backdrop of the ongoing macro conditions. We will also study the recent price performance of the index and review US500 forecasts for 2022 from analysts.

A detailed sector breakdown for the S&P 500 Index could offer investors more clarity on what factors may shape the S&P 500 forecast in 2022.

The index is widely regarded as the best performance indicator of large-cap US equities. Along with the 30-member blue-chip Dow Jones Industrial Average Index (US30) and tech-heavy Nasdaq Composite Index (US100), the broader 500-member S&P 500 is one of the three main benchmark indices for US equity markets.

The S&P 500 is market-cap-weighted, which means index components with a higher market capitalisation will receive a higher weighting.

As of 30 June 2022, the information technology sector had the highest weighting on the S&P 500, accounting for 26.8%. Healthcare and financials completed the top three sectors, with a 15.1% and 10.8% weighting respectively.

After hitting its lowest level since December 2020, the S&P 500 rebounded by over 6% in the fourth week of June, breaking a three-week losing streak in the process as short squeezes caught bears off guard.

Despite seeing a recent rally in prices, the S&P 500 posted losses of close to 9% in June.

As of 6 July 2022, the US benchmark index has lost close to 20% year-to-date (YTD). In comparison, the tech-heavy Nasdaq Composite Index has slumped nearly 30% in the same period, while the Dow Jones Industrial Average index has shed about 15%.

After dropping to near oversold zones on 16 June, the index’s 14-day Relative Strength Index (RSI) has risen to a near-neutral zone of 56 points, as of 6 July.

The Jefferies report said that “investors are now holding high levels of cash after one of the worst drawdowns in modern history”. The report showed that the S&P 500’s 12-month forward price-to-earnings was “just above” its long-term average.

“The multiple correction has been driven by long rates and not necessarily earnings revisions,” added Jefferies.

As the Fed has made its intention to rein in inflation clear, the market is wondering whether the liquidity drain from financial systems will push the US economy into a recession. ING Group’s research arm THINK said in a note:

“The recession fear narrative appears to have regained the upper hand and the impact of central banks’ hawkish posturing is having a reduced reach out the curve.”

ING added that US personal consumption expenditures (PCE) inflation data for May, which is the Fed’s preferred inflation measure, is expected to show a drop, further supporting the recession narrative.

On 29 June, Fed chair Jerome Powell acknowledged that “there is a risk” that aggressive monetary tightening could slow the economy more than necessary, but said rising inflation remains the bigger risk at hand.

Earlier, on 21 June, the Fed published a timely note titled Financial and Macroeconomic Indicators of Recession Risk. It stated that unemployment rates and inflation were strong predictors of recession risk over time periods longer than four quarters compared to other financial variables.

“Historically, elevated inflation and low unemployment have preceded recessions, consistent with the idea that such developments signal imbalances (overheated product and labour markets) that may unwind through an economic contraction.”

In the three months leading up to May 2022, US unemployment rates came close to multi-decade lows of 3.6%, while the Consumer Price Index (CPI) inflation data for May came in at 8.6%, above the Fed’s 2% target.

“The Fed’s rapid response – a 75 basis points (bps) hike – is a sign that it intends to win that credibility back at a higher risk of recession,” UBS said in a note after the Fed hiked rates by 75bps in mid-June, the biggest rate increase in nearly 30 years.

Recession fears could prompt investors to rerate company earnings. The S&P 500 forecast for 2022 and 2023 could trend downwards as predictions of lower corporate revenue and earnings are realised.

On 30 June, data showed US personal income and spending slowed from 4.9% to 4.7% and came in below the consensus forecast of 4.7%. James Knightley, chief international economist at ING, reacted to the news, saying:

“US consumer spending has been revised sharply lower through the first four months of the year, and with May now reporting an outright contraction it is clear that the trajectory of the US economy is not looking good. Further interest rate rises and an ongoing squeeze on spending power mean that growth forecasts are likely to be cut with recession risks rising.”

Elsewhere, Morgan Stanley was optimistic regarding the ability of the US economy to weather a recession, if and when it comes. Lisa Shallet, chief investment officer at Morgan Stanley’s wealth management division, said a recession could likely be “shallower and less damaging to corporate earnings than recent downturns”.

Shallet added that “damage to corporate earnings tends to be more modest during inflation-driven recessions,” compared to the credit-driven recessions seen during the Great Financial Crisis and the dot-com bubble. 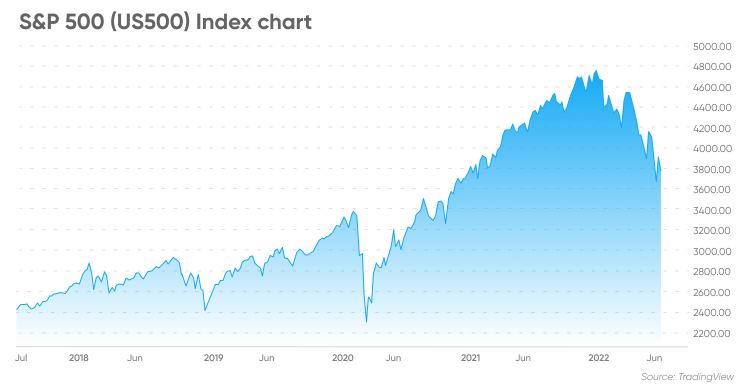 As mentioned earlier, the S&P 500 is a market-cap-weighted index. Therefore, the performance of the index’s largest constituents will play a major role in whether or not the S&P 500 falls further in 2022.

With tech stocks contributing the highest weight to the index, the outlook for the sector is crucial to its future performance. Technology stocks have had a bumpy ride so far this year, with rising interest rates and economic growth slowdown concerns negatively affecting their future earnings. Even blue-chip tech stocks like Apple, Amazon, and Alphabet have seen stock prices plunge.

Tech giant Apple, the S&P 500’s biggest constituent, has fallen about 20% YTD and hit a one-year low of $129 on 16 June. The company also lost its place as the world’s most valuable company to petrol giant Saudi Aramco in mid-May.

Meanwhile Amazon, Alphabet A, and Microsoft have dropped 34%, 22% and 21% YTD, respectively.

The market has been extra sensitive to tech earnings in 2022, and has punished stocks for the slightest hint of weakness. Investors were quick to dump Meta Platforms (META) – down 50.6% YTD – on 3 February on news of weak growth forecasts. Risk aversion took centre stage again on 20 April as Netflix (NFLX) stock plunged over 35% in a single session, after the streaming giant reported losing subscribers for the first time in a decade.

JPMorgan held a positive outlook for the US financial sector, which was the third-largest sector constituent of the S&P 500 index at 10.8%, in the current inflationary backdrop. It added that banks have historically performed well under inflationary conditions, but have suffered during recessions.

“The JPM Banks team highlighted that in their view, higher inflation and slow, but growing GDP [gross domestic product], is a good environment for Banks, with interest rate increases driving NII and loan growth remaining relatively healthy,” the bank noted.
“Having said that, our Banks team does not believe that a recession-inflation scenario is priced in, IE before provisions peak, as we are likely to see material earnings cut in such a scenario. Banks are likely to materially underperform leading up to a recession but this reverses and banks are excellent buys when provisions peak, in their view.”

Elsewhere, the UBS Chief Investment Office did not give S&P 500 predictions for 2022 and beyond. The investment bank advised that if equity markets were to see a further slump at an S&P 500 forecast of 3300, “investors can improve the resilience of equity portfolios by investing in quality income, and defensive sectors like healthcare.”

UBS said a “soft landing”, which would see inflation remain elevated but under control, had a 40% probability. In this case, “Value stocks tend to outperform while inflation is above 3%. Evidence that corporate earnings can remain resilient would be particularly supportive of energy and financials.”

Growth stocks will come back into favour if inflation falls and “a combination of a ceasefire in Ukraine, an end to zero-Covid policies in China and higher labour force participation drive” occurs, resulting in a strong equity rally, said the UBS Chief Investment Office. Such a reflationary scenario had a 10% probability of occurring, according to UBS.

When looking at S&P 500 forecasts, it’s important to bear in mind that analysts’ forecasts and price targets can be wrong. Analysts’ stock price predictions are based on making fundamental and technical studies of the stock’s performance. Past performance is no guarantee of future results. And never invest money that you can not afford to lose.

Will stocks recover? New analysis suggests growth stocks may be showing their bottom

CAC 40 forecast: Is the French index poised to outperform its peers?