Price pressures in Singapore eased in October, the first decline since February 2022, driven by smaller increases in prices of energy and retail. According to the Monetary Authority of Singapore (MAS), core inflation reached an annual rate of 5.1% in October, cooling from 5.3% in September and matching with the rate in August.

Headline inflation also pulled back to 6.7% in October, from 7.5% in August and September.

With major economies set to slow next year, supply constraints are projected to keep commodity prices elevated. Additionally, the US Federal Reserve (Fed) has indicated it could slow the pace of interest rate hikes. What is the outlook for Singapore’s inflation rate?

What is inflation and how is it measured in Singapore?

Inflation can be defined as a steady rise in product and service prices over a specific time frame. Price increases in a basket of chosen goods and services are typically expressed as percentage increases. Additionally, it reflects the decline in the purchasing power of money.

A decline in purchasing power can curtail economic growth.

Singapore’s Department of Statistics calculates the monthly Consumer Price Index (CPI) inflation for all items. The CPI only covers consumption expenditure by resident households – either Singapore citizens or permanent residents.

The total number of outlets selected for pricing is about 4,200.

The MAS does not set an explicit inflation target. It believes core inflation of less than 2% is consistent with overall price stability in the economy.

What is your sentiment on USD/SGD?

Give USD/SGD a try 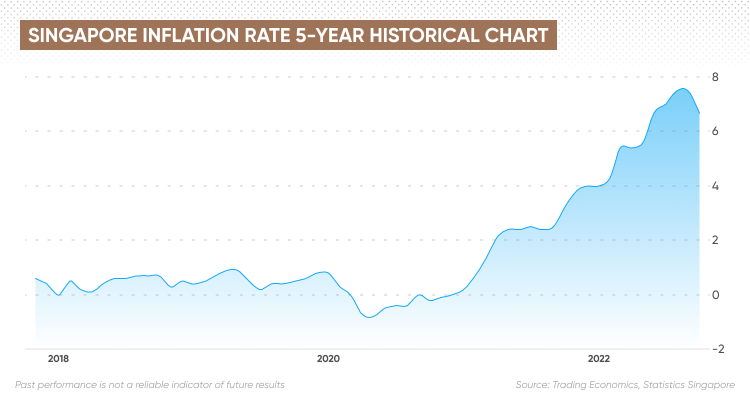 Inflation started to climb in 2021 amid the rising cost of imports and labour,  and recovery in economic activity with the gradual lifting of Covid-19 restrictions.

Singapore’s inflation rate continued to pick up in 2022. In January, MAS core inflation gained 2.4%, driven by higher inflation for food and electricity as well as gas. However, all-items inflation remained unchanged at 4% from December 2021.

On the domestic front, persistently tight labour markets supported a firm pace of wage increases, contributing to the high inflation rate. CPI-All Items advanced to 5.4% in March, while MAS core inflation hit 2.9%, compared to 4.3% and 2.2%, respectively, in February.

The inflation rate continued to climb in Q3, with MAS core inflation hitting 5.3% in September, from 5.1% in August, the steepest rise since November 2008. CPI all-Items inflation remained at a 14-year high of 7.5% in September, unchanged from August. Transportation costs climbed at the fastest rate, increasing 19% YOY, according to data from Singapore’s Department of Statistics.

In its October’s monetary policy statement, the MAS attributed rising inflation to increased import and domestic costs as a result of strong demand. Rising global energy and agriculture costs pushed up electricity and gas.

In October, the inflation rate in Singapore declined, with MAS core inflation returning to the August level of 5.1%. CPI-All Items was at 6.7%.

“The combination of post Covid reopening, booming tourist and business arrivals, robust capital inflows and a huge rise in business service company formation has squeezed the output gap from all directions – labour, housing and office space. There are no signs of cooling.”

The surging inflation has forced the MAS to step up its monetary policy to maintain the Singapore dollar’s (SGD) strength against other currencies.

Unlike other central banks, the MAS does not use interest rates to keep inflation in check. Instead, it manages the Singapore dollar (SGD) movement against a trade-weighted basket of currencies of the country’s main trading partners, which the MAS does not disclose, through a complex mixed of parameters.

This is because Singapore’s small and open economy depends on imports to meet demand, meaning that the exchange rate has more impact on inflation than interest rates. The Southeast Asian nation spends roughly 40 cents of every dollar on imports, according to the MAS. The country’s gross exports and imports of goods and services account for more than 300% of its gross domestic products (GDP).

The central bank establishes a defined ‘policy band’ within which the Singapore dollar or Sing appreciates or depreciates against a basket of currencies. When necessary, the MAS will step in to ensure the SGD does not deviate from the policy band.

“The inflation reading also validates MAS’ view that the recent string of aggressive tightening would feed through the economy and lower price pressures over the next few months. Despite the apparent turn in inflation, MAS will likely remain vigilant, maintaining its hawkish tone while monitoring the trajectory of core inflation.”

Since April 2022, Singapore’s central bank has adjusted the volatility of foreign exchange market twice – in July and October – while maintaining the rate of the SGD appreciation at 1.5%.

Let’s examine what factors contributed to the rising inflation before looking at analysts’ Singapore inflation predictions.

According to the MAS, the rise in prices of discretionary goods and services amid robust demand aided the pass-through of higher imported and domestic costs. Inflation in electricity and gas, as well as non-cooked food, also rose, reflecting the effects of a YOY increase.

The MAS expected imported inflation across a range of goods and services to remain significant for some time.

“Demand conditions in major economies have softened while supply chain frictions have continued to ease. Prices of energy and food commodities have come off the peaks reached earlier in the year but remain high given ongoing supply constraints. In addition, labour markets in major advanced economies are still tight, keeping wage pressures strong,” the bank said.

Lingering tight labour markets have contributed to fuelling inflation from wages. In September, Singapore’s unemployment rate dropped to 2%, down from 2.2% in March and 2.6% a year earlier. As the economy has improved, businesses are competing for talent by offering higher wages.

For a long time, the country has relied on foreign talent, and the slow return of foreign workers has tightened the labour market even more. SEB Group estimated that while non-resident labour flows rose to about 1.306 million in 2022, they remained well below the 1.427 million recorded in 2019.

“On the domestic front, unit labour costs will increase further in the near term alongside robust wage growth,” MAS said.

The Singapore dollar has so far bucked the depreciation trend in global currencies as the Fed’s aggressive rate hike strengthened the US dollar (USD). Analysts expected that the MAS’ recent aggressive tightening could boost SGD against most of its trading partners’ currency.

As of 29 November, the USD/SGD currency pair traded around 1.37 a dollar, gaining 0.59% YOY, reflecting a stronger US dollar.

The Singapore dollar, however, has strengthened against the euro. As of 29 November, the EUR/SGD exchange rate was 1.42, falling 7.93% YOY.

The Monetary Authority of Singapore predicted core inflation to average 4% in 2022 while CPI-All Items inflation was expected at around 6%.

The Singapore inflation rate forecast for 2023 was expected to average 3.5% to 4.5%, considering all factors including GST increase, according to the MAS. The central bank saw headline inflation at 5.5% to 6.5% in 2023.

“MAS core inflation is projected to stay elevated in the next few quarters before slowing more discernibly in H2 2023 as the current tightness in the domestic labour market eases and global inflation moderates. There are upside risks to the inflation outlook, including from fresh shocks to global commodity prices and more persistent-than-expected external inflation,” the MAS said in its inflation report.

Economists and analysts polled in the MAS’ Survey of Professional Forecasters in September raised their core inflation forecast for 2022 to 3.8%, from 3.4% in June. They also increased the CPI inflation estimate for 2022 to 5.7% from the previous 5%.

“Nevertheless, we keep our full-year forecasts unchanged as price pressures could potentially pick up again going into the year-end festivities and school holidays. Given that inflation still remains elevated and continues to broaden out, MAS will not be declaring it a success anytime soon in our view.”

Analysts mentioned in this article expected inflation in Singapore to remain elevated in the short term, before gradually decelerating in 2023 onwards.

When researching Singapore’s inflation forecast, keep in mind that analysts’ estimates can be inaccurate. They should not be used to replace your own research. Always do your own research before trading. And never trade money that you cannot afford to lose.

Natural Gas 2.436
Trade
-2.190%
US100 12624.1
Trade
+0.200%
BTC/USD 23449.05
Trade
+0.010%
XRP/USD 0.41077
Trade
-0.180%
Oil - Crude 73.87
Trade
-3.090%
The difference between trading assets and CFDs
The main difference between CFD trading and trading assets, such as commodities and stocks, is that you don’t own the underlying asset when you trade on a CFD.
You can still benefit if the market moves in your favour, or make a loss if it moves against you. However, with traditional trading you enter a contract to exchange the legal ownership of the individual shares or the commodities for money, and you own this until you sell it again.
CFDs are leveraged products, which means that you only need to deposit a percentage of the full value of the CFD trade in order to open a position. But with traditional trading, you buy the assets for the full amount. In the UK, there is no stamp duty on CFD trading, but there is when you buy stocks, for example.
CFDs attract overnight costs to hold the trades (unless you use 1-1 leverage), which makes them more suited to short-term trading opportunities. Stocks and commodities are more normally bought and held for longer. You might also pay a broker commission or fees when buying and selling assets direct and you’d need somewhere to store them safely.
Capital Com is an execution-only service provider. The material provided on this website is for information purposes only and should not be understood as an investment advice. Any opinion that may be provided on this page does not constitute a recommendation by Capital Com or its agents. We do not make any representations or warranty on the accuracy or completeness of the information that is provided on this page. If you rely on the information on this page then you do so entirely on your own risk.