Russian stock market forecast: Will the freeze turn to permafrost?

With the MOEX still closed at the time of writing (10 March), and heavy sanctions pummeling the Russian financial sector, many investors have been left stunned by what is going on with the Russian stock market.

Could this trading freeze turn into a deeper permafrost? We take a look at the latest Russian stock market news and examine the outlook for the Moscow Stock Exchange.

The Moscow Exchange (MOEX) is the key Russian stock exchange, facilitating trades in equities, bonds, derivatives, foreign exchange, money markets and precious metals. It is also the central securities depository for the country and acts as Russia’s largest clearing house.

MOEX was established on 19 December 2011 by the merger of the Moscow Interbank Currency Exchange (MICEX) and the Russian Trading System (RTS) stock exchanges.

The RTS (RTSI.ME) is generally seen as the key Russian stock market index. The RTS tracks the performance of the 50 largest and most liquid stocks. It’s denominated in dollars. At the time of writing (10 March), well known names such as Gazprom (GAZP) and Polymetal International (POLY) were among its top 30 components of this Russia stock index. RTS is traded on the stock exchange in Moscow.

A second index, the MOEX (IMOEX.ME) also tracks the performance of the 50 largest and most liquid stocks across ten sectors in the country. It’s denominated in rubles.

The Russian stock market was effectively frozen on 28 February as the Russian Central Bank (CBR) suspended trading sessions and settlements in all Moscow Exchange markets.

At the same time, the Russian financial system began to come under intense pressure from a range of sanctions. These included preventing several Russian banks from accessing the SWIFT payments system and further restrictions to effectively freeze the CBR’s assets.

According to a 28 February briefing from Oxford Economics, the pressure on Russian assets had become “extreme” by this point, and the CBR was forced to take measures to try and shore up the economy.

These included increasing interest rates to 20%, introducing controls to force exporters to sell 80% of their proceeds on the open market and measures to support banks facing sanctions.

Crucially, 28 February also saw the CBR suspend trading on the MOEX, with its Press Service announcing that it would “assess whether it is reasonable to open trading sessions in other markets based on the current developments”.

At the time of writing (10 March), the MOEX was still closed, pending further updates from the CBR’s Press Service  In addition, the London Stock Exchange, NASDAQ and NYSE had also suspended trading of Russian-based stocks.

“Currently the Russian stock and futures markets are closed in order to avoid panic selling and the depreciation of Russian stocks to zero,” said Mikhail Karkhalev, market analyst at Capital.com.

“This is standard practice when there is chaos in the financial markets. American stock exchanges also froze trading during periods of turmoil, sometimes in all assets, and sometimes in individual stocks,” the analyst added.
“If the trading is not stopped, it could lead to what happened on the London Stock Exchange, where Sberbank shares fell to 1 cent. This is while on the MOEX Sberbank shares were worth about $1 before there was a freeze – 100 times higher than the LSE price.”

The combination of sanctions and Russian policy responses have formed a complex set of circumstances, meaning the Russian stock market outlook is still unclear.

“Even if you could sell, there remains the problem of finding a willing buyer, agreeing a price (any price?) and also arranging payment, in dollars, rubles or any other currency, given the sanctions that have been imposed via Swift and other payment systems,” Mould said.

Amid this significant market uncertainty, could looking back to past conflicts shed some light on what awaits the Russian stock market?

In 2014, investment company Research Affiliates investigated the impact of six modern-day conflicts and their impact on stock markets, prompted by Russia’s 2014 invasion and annexation of Ukraine.

Their research found that markets fell sharply in the first two or three months after the beginning of the conflict and remained depressed for up to six months. They had fully recovered after the wars began. When “regionally contained wars break out, the negative impact is sharp but relatively short-lived”, the report said. 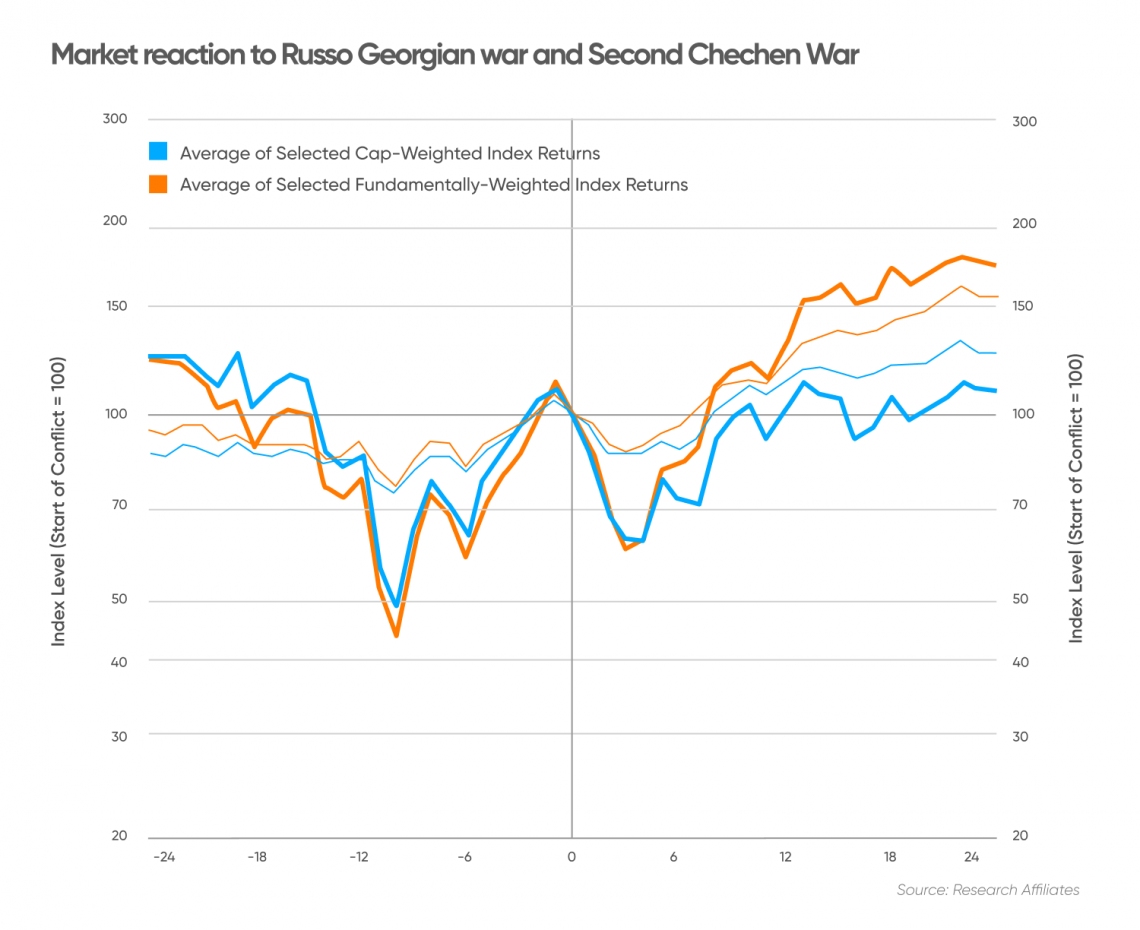 Historical data can provide a valuable perspective, but its usefulness is likely to be very limited in this case. The severity of the sanctions placed on Russia, the unprecedented duration of its stock market freeze and controls imposed by the CBR means that a quick return to normality looks increasingly unlikely.

With the Moscow stock market frozen and Russian-based stocks suspended on major global exchanges, it is difficult to get a sense of what price movements could occur when markets finally reopen.

Several companies with strong Russian ties are still trading, including Polymetal International (POLY), a Russian listed company which had escaped LSE suspension (at the time of writing) thanks to its London incorporation.

The company was also hit by a boardroom exodus on 7 March, with its chairman and all five of its independent non-executive directors stepping down with immediate effect. The London Stock Exchange also cancelled all trades that took place in a 21 minute window on 7 March, adding to the turmoil facing the firm.

When the stock market does eventually reopen, could we see a rebound if some investors are tempted by the opportunity to buy at low prices? As AJ Bell’s Mould points out, in some cases, “the assets – gold mines, oil wells, steel mills and so on – are still the same.”

The wider impact of the Russian invasion cannot be discounted. A 7 March briefing note by Capital Economics reported a significant shift in corporate behaviour, with BP and Shell pulling out of joint ventures in Russia, and companies like Apple and Ikea halting sales in the country.

“At the moment there is almost no price at which investors wish to touch Russia assets or its currency.”
byRuss Mould, AJ Bell

Group chief economist, Neil Shearing, explained that “the war and the sanctions themselves have imposed logistical, legal and financial barriers to transacting with Russia”, but added that “reputational concerns have caused firms to “self-sanction”.

And when the stock market freeze ends, it may well be the case that institutional and retail investors are dissuaded by the same potent combination of concerns.

AJ Bell’s Mould summarised the significant difficulties facing the market: “At the moment there is almost no price at which investors wish to touch Russia assets or its currency, because of geopolitical concerns and the multiple challenges associated with them.”

Capital.com’s Karkhalev, however, was more optimistic, stating that after the initial shock, the stock market will recover: “As soon as the conflict in Ukraine fades, as well as thanks to the interventions of the Russian central bank and share buybacks, the Russian stock market will gradually begin to recover. Of course, it will not be without turbulence, and you should not expect incredible growth either.”

On 4 March 2022, a Russian financial analyst went viral when he toasted the death of the stock market on Russian TV, saying “rest in peace, dear comrade”. The Russian stock market may not be dead, but it looks set for a huge shock when it wakes from hibernation.

Baidu stock forecast: Is BIDU a buy at over one-year lows?

How will Russia’s alliance with China hurt European stocks?

Mercedes-Benz (DDAIF) stock forecast: will it hold in the EV race?