Rivian short squeeze: Will RIVN add to over 30% July surge?

The company listed in November 2021 amid much fanfare. However, in 2022, its share price has fallen over 50% while the number of RIVN shares shorted has nearly doubled since the end of 2021.

The increased short sellers’ interest has seen short squeezes in Rivian giving the EV stock some respite from sell-offs. Rivian’s stock surged over 30% in July to see its best month to date after the company announced that it was on track to meet its production target for 2022.

Will there be another Rivian short squeeze? Here we take a look at the stock and the factors affecting its share price movement.

What is a short squeeze?

Stock traders can make a profit from the falling price of a security by shorting-selling. A trader opens a short position by borrowing shares of a stock in anticipation that it will fall in price. They then sell the borrowed shares and buy them back after the share price has fallen.

Short selling does not always go according to plan. If the market goes against the short seller’s position, a heavily-shorted stock price may rise and force short sellers to cut their losses and exit their positions.

Short sellers rushing for the exit have to buy back borrowed shares from the market, which can result in a further rise in the price. Rising asset prices attract new buyers. This combination of new buyers and panicked short sellers boosts demand and price of the stock, resulting in a short squeeze.

What is your sentiment on RIVN?

Give RIVN a try

Rivian Automotive is an electric vehicle (EV) manufacturer based in California. The company specialises in making electric pickup trucks. It’s delivered two models, the R1T and R1S, as of mid-2022.

Rivian also aims to serve the commercial market and has launched the Rivian Commercial Vehicle platform in collaboration with e-commerce giant Amazon (AMZN). The company is developing the Rivian Commercial Van (EDV), a long-range electric commercial step-in van, of which Amazon has placed an initial order of 100,000 vehicles for global deployment, according to the company’s annual 10-K filing.

“Under the EDV Agreement, we have granted Amazon certain exclusivity and first refusal rights which will initially restrict our ability to contract with other commercial customers,” said Rivian.

Rivian stock listed on Nasdaq in November 2021 at an initial public offering (IPO) price of $78 a share. The company’s listing raised proceeds worth over $13.5bn. 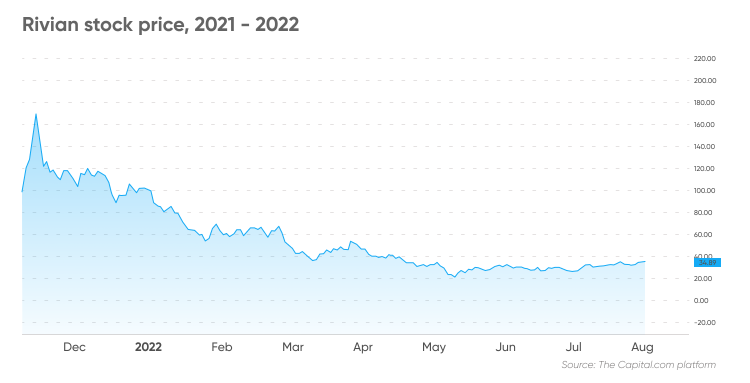 Rivian Automotive stock has attracted a significant amount of short-selling interest in its short history as a publicly-listed stock, which later contributed to the Rivian short squeeze. According to data compiled by MarketBeat, Rivian short interest on 15 July 2022 stood at $1.7bn representing 11% of the company’s shares.

However, with high short interest comes a high chance of fortunes reversing for the shorted stock in the event of a short squeeze.

The second week of July saw a Rivian stock short squeeze as share prices surged nearly 25% after the company announced that it was on track to deliver its annual production guidance of 25,000 vehicles.

Rivian also announced on 6 July that it had produced 4,401 vehicles and delivered 4,467 in the June quarter. The figures were an improvement on 2,553 manufactured and 1,227 delivered in the March quarter.

The upbeat production announcement and RIVN stock short squeeze helped the stock post its best monthly gain since its debut month. RIVN stock gained 33% in July from an opening price of $25.9 to a close of $34.3.

Traders wanting to short Rivian stock will have to watch out for the company’s June quarter financial results scheduled to be released on 11 August 2022.

Furthermore, the company will also be reducing its headcount by 6% in order to reduce costs, as reported by Reuters citing an internal email sent by Rivian chief executive RJ Scaringe.

Rivian will focus on its R1 models and the EDV and speed up development and launch of future products over the next 18 months, Reuters said..

Investment banks Goldman Sachs, JP Morgan & Chase and Citigroup are among a number of institutional investors and funds who have short positions in Rivian Automotive, as of 15 July, according to MarketBeat.

Data showed that the value of Rivian short interest has eased in 2022, coming down from over $3bn on 31 December 2021 to $1.7bn on 15 July 2022. However, there is more the numbers need a closer inspection to get an accurate picture about the potential RIVN short squeeze.

According to data analytics firm 2iQ, short-sellers have been targeting Rivian due to supply chain problems, capital needs and high valuations. In March 2022, Rivian cut its 2022 production guidance in half from 50,000 vehicles to 25,000 vehicles citing that “supply chain will be a fundamental limiting factor in our total output” throughout 2022.

Ed Sheldon and Suhaib Haider of 2iQ noted that the company will “most likely” have to raise capital for funding  production. “And with interest rates rising, the cost of capital is going up,” they said.

“Finally, there’s the valuation. Rivian has only produced a handful of vehicles so far, yet it has a market capitalisation of $34.9 billion. Assuming it can hit analysts’ 2022 revenue forecast of $2.01 billion, the stock’s price-to-sales ratio is 23. That’s high,” added the duo.

According to analyst ratings on Rivian Automotive compiled by Wall Street Journal, as of 5 August, 10 of 17 analysts rated RIVN stock “buy” and six “hold”. The average Rivian stock prediction stood at $52.57, with the high of $108 and low of $24.

Meanwhile, CNN-compiled data of 14 analysts as of 1 August revealed a median 12-month Rivian price forecast of $45 with a high estimate of $108 and a low estimate of $24.

Note that analysts' views on the outlook for the stock or RIVN short squeeze can be wrong. Forecasts shouldn’t be used as a substitute for your own research. Always conduct your own due diligence and remember that your decision to trade or invest should depend on your risk tolerance, expertise in the market, portfolio size and goals.

Tesla shareholders: Who owns the most TSLA stock?

Porsche shareholders: Who owns the most POAHY stock?