As 2022 draws to an end, a number of major investment banks have released their outlooks for 2023, which raises a key question: will metals sink or soar in the coming year? 2023 is anticipated to be a pivotal year for metals due to increased recession concerns in the advanced economics as well as expectations for a Chinese economic recovery following Covid lockdowns.

The US Federal Reserve, as well as other major central banks such as the Bank of England and the European Central Bank are also likely to be very much in the focus for the next year, as investors keep a hawk-eye on monetary tightening policies and interest rate hikes to control soaring inflation. 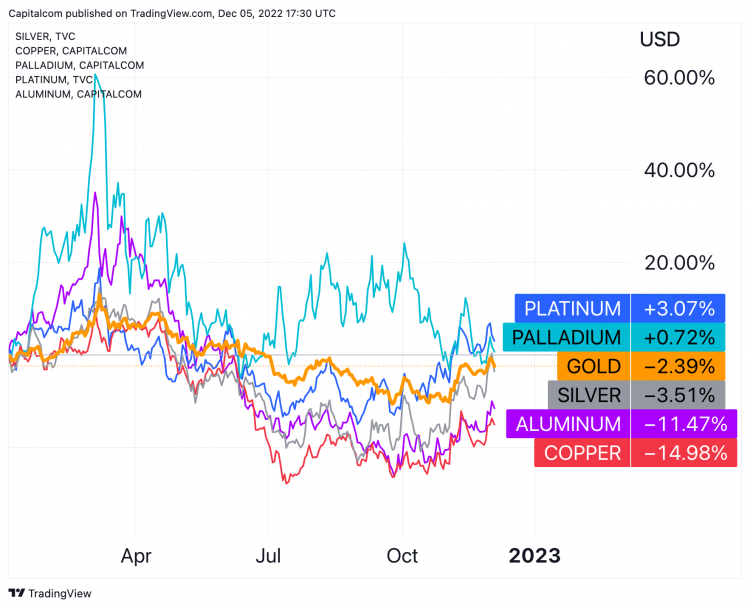 Only when the coming scenario is priced into equity valuations will BlackRock turn positive on equities- but is still warning that markets will not see the same kind of bull run as before. This is also due to the continuing themes of output volatility, rising bond yields and persistent inflation.

Goldman Sachs (GS) highlights, “We expect global growth of just 1.8% in 2023, as US resilience contrasts with a European recession and a bumpy reopening in China.” It further outlines that the US may just be able to miss recession, due to estimates of personal consumption expenditures (PCE) inflation slowing down from about 5% now to about 3% in the later half of 2023.

This is likely due to the fact that this inflationary cycle being different from previous one, due to the labour market after the pandemic showing signs of overheating by having many more new job openings than before. Goldman Sachs also emphasizes that long-term inflation expectations are still well-anchored.

Coming to China, the bank says, “We expect weak growth in Q4 and Q1 as the Zero Covid Policy (ZCP) likely stays in place during the winter. In fact, the recent sharp rise in cases led us to have a significantly below-consensus Q4 estimate of 1.2% annualized.

Although the leadership has clearly signaled that it aims to exit ZCP, we do not expect actual reopening to start until April. The basic reason for this is that medical and communication preparations will take time. Less than 70% of the 60+ age group in Mainland China are triple-vaccinated.”

According to J.P. Morgan’s (JPM) outlook, “Our core scenario sees developed economies falling into a mild recession in 2023. However, both stocks and bonds have pre-empted the macro troubles set to unfold in 2023 and look increasingly attractive, and we are more excited about bonds than we have been in over a decade.

The broad-based sell-off in equity markets has left some stocks with strong earnings potential trading at very low valuations; we think there are opportunities in climate-related stocks and the emerging markets.”

However, the bank warns that the housing and construction sectors are still set for a slowdown in the coming year.

Barclays (BARC) supports this notion, “Looking ahead and into 2023, we remain “uncomfortably constructive”. Indeed, we expect the next 12 months to be equally challenging for investors. The prospect of slowing economic growth, if not recession, coupled with stubbornly elevated inflation, will require central bankers to find the right balance between too much and not enough monetary policy tightening.

At the same time, governments won’t be able to pick up the stimulus baton as easily, with funding becoming increasingly expensive. Both Europe and the UK are more likely than not to enter a recession. In the US, the outlook is slightly more encouraging, but the largest economy in the world may barely grow next year. One big question is whether China will finally move away from its zero-COVID policy to resuscitate the economy.”

How are metals likely to be affected?

China’s growth and economic expectations are quite weak, according to the majority of these investment banks, mostly due to the still-strong effects of rising COVID-19 cases and the floundering real-estate sector.

Investors also seem to have quite little confidence in Xi Jinping during his current historic third term, despite promises of ending rigid zero-COVID rules soon. If these promises are not fulfilled, China may see more widespread protests in the coming few months, which will further disrupt manufacturing and economic activity.

This is likely to keep significantly impacting precious metals such as silver and gold, which have a strong jewellery and industrial link with the country. China consumed about 675 metric tons of gold jewellery in 2021, as per this report, which accounted for about 56% of global consumption.

China also consumed about 3,400 metric tons of silver in 2021, according to this report, which mainly goes towards the production of solar panels, as well as other industries such as the jewellery, photography and electronics industries.

Due to China’s weak economic outlook, gold and silver may be a bit more subdued in the next year. However, even base metals such as copper and iron ore are likely to be pulled down, as the Chinese property sector has still not recovered fully.

There are also speculations of China, as well as other countries such as the US now starting to pull back on the COVID-19 stimulus packages and not offering the economy as much support before. This is likely to propel the global economy further into recession, which will continue to pressurise metals further.

China also depends heavily on Australia for its imports of copper and iron ore, which means that the strength of the Australian dollar (AUD), will also have an important role to play in the demand for these metals in 2023.

However, some encouraging signs are also emerging out of China, with several districts in Shanghai and Guangzhou agreeing to lift zero-COVID restrictions amidst widespread protests. Furthermore, there have also been speculations about the government mulling over ending mass lockdowns altogether. The People's Bank of China (PBoC) has also recently slashed the reserve requirement ratio for banks, in an attempt to infuse the economy with more liquidity. These have gone a long way in giving investors some hope that the Chinese economy may finally be starting ton recover.

Goldman Sachs is also cautiously optimistic about the same, "In contrast, we look for a meaningful reopening growth boost in H2, which will likely extend into 2024. As ZCP is currently still subtracting about 4-5% from the level of GDP, we see substantial room for a cyclical rebound as immunity levels rise and most households learn to live with the virus."

Which are the main factors to look out for in 2023?

According to BlackRock, inflation is likely to slow down somewhat in the coming year, however, still remain persistently above the 2% target set by central banks worldwide. Due to this, all eyes are on the US Federal Reserve, for the size and timing of its further rate hikes throughout 2023, which is likely to have a major impact on metal markets.

Piero Cingari, markets specialist at Capital.com, highlights “The market is now pricing in a peak in Fed interest rates of roughly 4.9% in May 2023, followed by a drop to around 4.45% in December 2023. This indicates that the market is presently factoring in approximately two 25bps of cuts for H2 2023.

In my opinion, this is a little too optimistic. The Fed has signalled the need to maintain restrictive financial conditions for a longer period of time to prevent repeating mistakes done in the past. The inverted Treasury yield curve indicates that bond market is pricing in a weaker economy, if not a recessionary condition for the upcoming year.

However, I believe the Federal Reserve may be more hawkish than the market presently anticipates even in a recession, as inflation pressures persist particularly on wages. If this is the case, then Treasury yields may reprice higher, and the dollar (DXY) may receive support; all of these factors may act as a headwind for metals prices.

In general, the outlook for metals may be marginally more optimistic than it was in 2022, which was a negative year due to a very hawkish Federal Reserve and lockdowns in China, both of which weighed on prices. Rising chances of a Chinese reopening next year might help mitigate the impact of the Fed’s unexpectedly hawkish stance.”

Natural Gas 2.741
Trade
-3.920%
Oil - Crude 79.27
Trade
-0.580%
Gold 1927.63
Trade
-0.030%
Oil - Brent 85.89
Trade
-0.530%
Silver 23.710
Trade
+0.470%
The difference between trading assets and CFDs
The main difference between CFD trading and trading assets, such as commodities and stocks, is that you don’t own the underlying asset when you trade on a CFD.
You can still benefit if the market moves in your favour, or make a loss if it moves against you. However, with traditional trading you enter a contract to exchange the legal ownership of the individual shares or the commodities for money, and you own this until you sell it again.
CFDs are leveraged products, which means that you only need to deposit a percentage of the full value of the CFD trade in order to open a position. But with traditional trading, you buy the assets for the full amount. In the UK, there is no stamp duty on CFD trading, but there is when you buy stocks, for example.
CFDs attract overnight costs to hold the trades (unless you use 1-1 leverage), which makes them more suited to short-term trading opportunities. Stocks and commodities are more normally bought and held for longer. You might also pay a broker commission or fees when buying and selling assets direct and you’d need somewhere to store them safely.
Capital Com is an execution-only service provider. The material provided on this website is for information purposes only and should not be understood as an investment advice. Any opinion that may be provided on this page does not constitute a recommendation by Capital Com or its agents. We do not make any representations or warranty on the accuracy or completeness of the information that is provided on this page. If you rely on the information on this page then you do so entirely on your own risk.