In a monetary policy meeting on 22 September, the Bank of Japan’s interest rate was left unchanged at -0.1%, making the BoJ the only G10 central bank that maintained a dovish stance in a global monetary tightening cycle. The BoJ also kept the 10-year Japanese Government Bond (JGB) at a level of 0%.

The US dollar (USD) to Japanese yen exchange rate briefly crossed the resistance level of 145.33, the lowest since 1998, before dropping to 144.85, following the decision on 22 September.

The yen's depreciation has reflected the growing gap between Japanese interest rates and the US policy rate. The US Federal Reserve (Fed) raised its federal funds rate by 75 basis points (bps) to a target range of 3% to 3.25% on September 21 – a move widely expected by markets.

The risk of further yen depreciation loomed as analysts expected the Fed would continue its rate hike policy until the end of 2022, while inflation was expected to accelerate. Will the Bank of Japan end its dovish stance?

In this article, we look at the BoJ’s policy rate history and drivers for the central bank’s monetary approach, as well as analysts’ opinions on the projected Japan interest rate in 5 years.

What is the Bank of Japan?

The Act was amended several times, including in June 1949 with the establishment of the Policy Board, the bank’s highest decision-making body. The board decides monetary policy and the bank’s business operations.

The MPM looks at matters related to monetary policy eight times a year. It adjusts guidelines for money market operations and the basic discount rate, the basic loan rate and reserve requirement ratios. The board meets twice a year to discuss non-monetary policy matters.

One of the BoJ’s monetary policy objectives is price stability, with a target of keeping the Consumer Price Index (CPI) to a maximum increase of 2% year-over-year (YoY).

The Policy Board’s nine members – the Governor, two Deputy Governors and six other members – are appointed by the Cabinet, subject to the consent of both houses of the Diet (Japan’s parliament), the House of Representatives and the House of Councillors.

Japan’s central bank began its policy of low interest rates in 1995 by cutting the key rate to 0.50% in September 1995 from 1% in April 1995, according to Japan interest rate history data from the BoJ.

During the global financial crisis of 2007-2008, the BoJ gradually reduced its policy rate to 0.10% by December 2008, from 0.50% in February 2007. The rate cut came as the country’s exports decreased due to a slowdown in overseas economies. On the domestic front, demand was weak as corporate profits and employment fell as household incomes worsened, the central bank said in its statement.

The Bank of Japan’s interest rate remained at between 0% to 0.10% until January 2016, when it cut the rate to -0.10% as the country’s economic recovery came in at a moderate pace and was coupled with weak inflation.

The bank raised concerns about the UK's referendum to leave the European Union, blaming the country for causing instability in global markets, and announcing an expansion of its monetary easing programme.

“Against the backdrop of the United Kingdom’s vote to leave the European Union and the slowdown in emerging economies, uncertainties surrounding overseas economies have increased and volatile developments have continued in global financial markets,” the BoJ said in a statement on 29 July 2016.

The Government of Japan has lifted its estimate for the country’s gross domestic product (GDP) growth in the second quarter of this year from 2.2% to 3.5%, Cabinet Office data showed on 8 September.

Private consumption, which accounts for 60% of total GDP, increased by 1.2% from the previous estimate of 1.1%.

“Growth in 2Q CY22 (Calendar Year 2022) was mainly driven by a rebound in private consumption, reflecting the domestic reopening, and a pick-up in capex,” Bank of America (BofA) analysts Izumi Devalier and Takayasu Kudo wrote in a note on 15 September.

The median forecast by the majority of Monetary Policy Board members saw Japan’s GDP growing by 2.4% in fiscal year 2022, 2% in 2023 and 1.3% in 2024, according to BoJ’s quarterly Outlook for Economic Activity and Prices, released in July 2022.

According to BofA, there are tailwinds that could ensure that Japan will continue its solid growth. These include recovery in auto production, which suffered from semiconductor shortages, and an increase in foreign tourist arrivals in line with borders reopening.

On the other hand, BofA also warned of slowing manufacturing as the US, one of Japan’s main trading partners, is forecast to go into recession. Risks from inflation may serve as strains on Japan’s economic recovery.

The firm wrote on 15 September:

“Japan will feel the impact of the global slowdown and we have pared back our expectations for exports. In annual terms, export volumes are only expected to grow by 0.5% in 2023 as the US enters a mild recession, Europe struggles amid the gas crisis, and China’s recovery remains sluggish.”

In the latest Japan interest rate news, the annual CPI inflation for all items in Japan rose 3% in August 2022, according to data from Statistics of Japan, crossing the BoJ’s inflation target of 2%. In comparison, the country’s annual CPI was -0.4% in August 202.

Electricity and gas for households registered the biggest jump of 21.5% and 20.1%, respectively. Japan is a net importer of oil and natural gas, whose prices have hit record highs amid Russia’s invasion of Ukraine.

In its monetary policy statement on 22 September, the BoJ noted that inflation expectations have risen, given the latest CPI reading. In its July economic outlook, the median forecast of the Monetary Policy Board expected the inflation rate, excluding fresh food, to average 2.3% in fiscal year 2022, higher than April’s estimate of 1.9%. Inflation was expected to ease to 1.4% in 2023 and 1.3% in 2024.

In Q2 and Q3 2022, the US dollar’s exchange rate strengthened against the Japanese yen (USD/JPY) due to widening differential between BoJ and Fed policy rates.

The yen briefly hit 145 – a level not seen since 1998 – following the BoJ’s decision to keep its ultra-low policy rate. 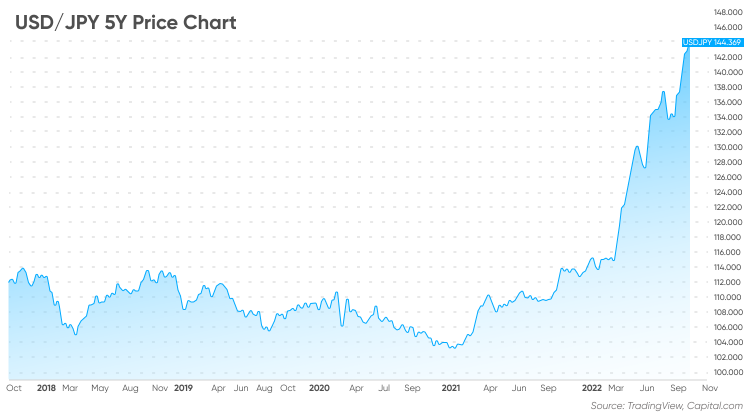 As of 22 September, the pair was trading around the 142 level, following an intervention in foreign currency markets by the Japanese government.

The move sent the USD down to around 140.3 yen after trading over 1% higher on the BoJ’s decision to stick to its loose policy stance.

Analysts, however, are doubtful that the move will sufficiently halt the yen’s prolonged slide.

“The market was expecting some intervention at some point, given the increasing verbal interventions we have been hearing over the past few weeks.
“But currency interventions are rarely successful and I expect today's move will only provide a temporary reprieve (for the yen).”

“We continue to expect the possibility of some adjustment to BOJ policy, such as a modest 10-20bp widening of the tolerance band for the JGB 10-year yield, particularly if inflation is higher than expected, the yen weakens further and US Treasury yields rise.”

“We think USD/JPY has now overshot fundamentals, but JPY is a falling knife.”

Japan’s interest rate outlook for 2022 and beyond

As the yen continues to depreciate, and the inflation rate is expected to accelerate in the coming months, what are analysts’ forecasts for Japan's interest rate in 5 years?

Fitch Ratings and ING expected the Bank of Japan interest rate would remain unchanged at -0.1% until the end of 2024.

BofA expected the Bank of Japan to hold the ultra-loose policy rate through the remainder of Governor Haruhiko Kuroda’s tenure, and any policy normalisation would be delayed until new leadership came in after April 2023, despite pressure from the weaker yen.

In a 3 August note, CIBC Capital Markets said that it also did not expect the BoJ to reverse its ultra-low rates until Kuroda's successor takes office after Q1 2023.

Analysts did not provide a Japanese interest rate forecast beyond 2024 due to uncertainty after BoJ’s leadership change the following year.

Analysts quoted in this article were all in the opinion that the BoJ was unlikely to abandon or adjust its ultra-loose policy rate until Governor Kuroda’s tenure ends in Q1 2023.

Keep in mind that analysts' opinions and forecasts can often be wrong. Forecasts should not be used in place of your own research. Always conduct your own due diligence before trading or investing. And never invest or trade money that you cannot afford to lose