Palladium prices plunged to a 20-month low over the past two weeks as weak automotive demand and a stronger US dollar weighed on the market. 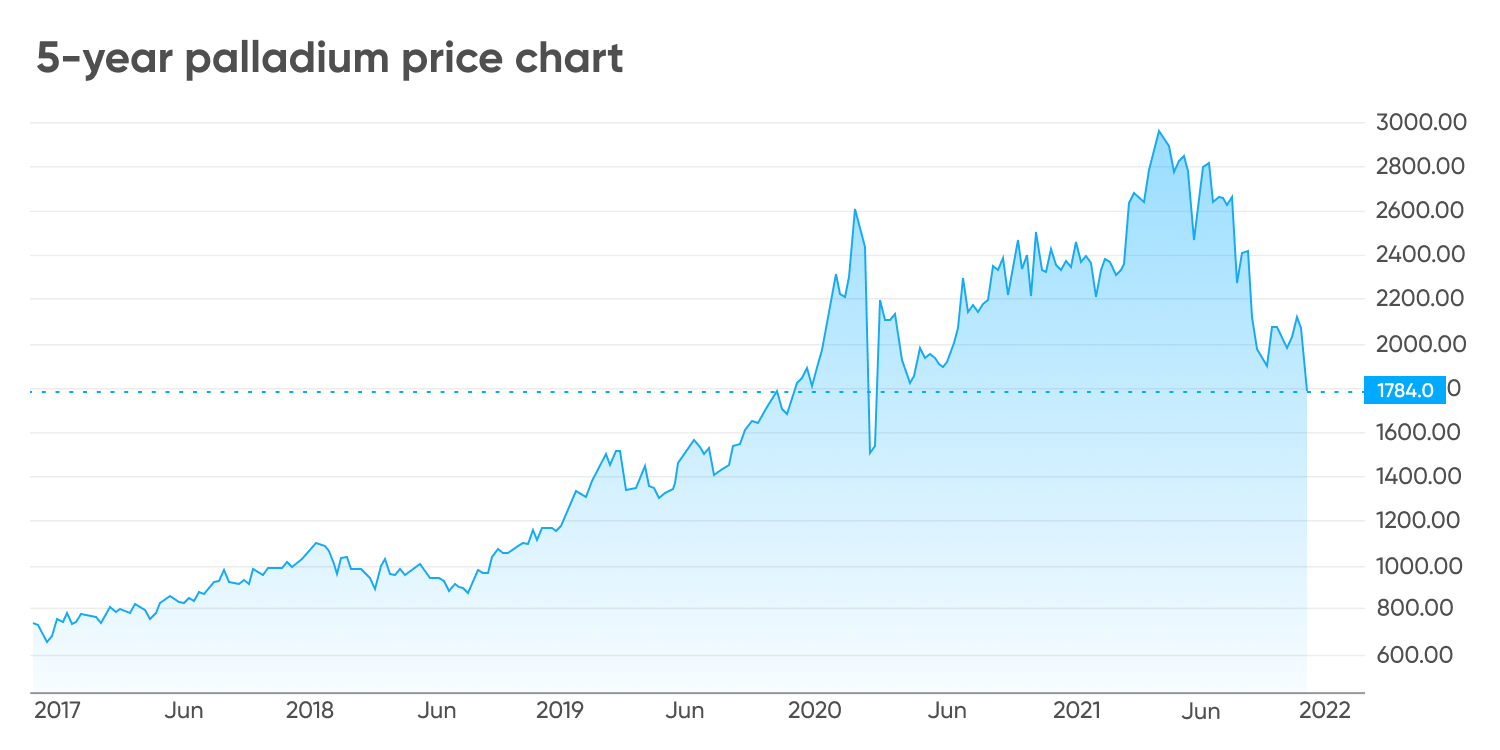 The December palladium contract rose over October and hit a two-month high of $2,187.42 on 17 November but prices fell as automotive production continued to be hampered by the global semiconductor shortage.

Palladium is both an industrial and precious metal. It is a key material in automotive catalytic converters, reducing toxic emissions of nitrogen oxides into less harmful gases in vehicle exhaust systems. In recent years, more countries have implemented stricter emission standards to combat pollution and global warming. This has increased the demand for autocatalytic converters and in turn lifted global palladium consumption.

The automotive sector is the largest consumer of palladium, followed by electronics, dentistry and jewellery.

However, fewer vehicles were manufactured this year because of the global semiconductor shortage, leading to lower palladium demand, which has pressured prices.

As a precious metal, palladium is also used as an inflation hedge and a safe-haven asset. Like other safe-haven assets, its price is also driven by macroeconomic factors such as interest rates and the US dollar value. Such assets tend to fall in value when interest rates are higher and the US dollar is stronger against other currencies, as investors divert funds towards other more profitable and riskier investment products.

Following the renomination of Jerome Powell as the US Federal Reserve chair for a second term last week, there was a sell-off for precious metals complex amid a strengthening of the US dollar.

The US dollar index (DXY) has been climbing since the second half of this year and hit a 16-month high at 96.88 on 24 November. Although the index has since dropped to 96.34 on 29 November, it remained around the 16-month high.

How will palladium perform for the rest of 2021 and beyond? Read this palladium analysis to learn more about the palladium price trend, analysts’ forecasts and news affecting the precious metal market.

According to industrial consumer Johnson Matthey’s data, palladium started the year at $2,481 an ounce and prices surged to $2,516 on 17 March when mining operation was disrupted in Russia – the world’s largest producer. In February and March, mining operations at Russian producer Nornickel’s Oktyabrsky and Taimyrsky mines were halted by flooding. A return to full production was scheduled in June following the flooding. In addition, an accident at one of the two concentrator plants at the Polar mine site further disrupted platinum group metal (PGM) production earlier this year.

Following the series of supply disruption, palladium prices briefly hit a record high at $3,016 an ounce on 5 May but fell in the months after on lower autocatalytic demand. Car makers such as Toyota and Volkswagen announced production cuts because of the semiconductor shortages.

Johnson Matthey’s palladium supply and demand forecast predicts the precious metal is expected to have a deficit of 829,000 ounces in 2021.

Although supply has increased this year, the overall demand growth this year is expected to exceed supply, leading to a deficit this year. Global production is projected at 6.75 million ounces in 2021, up 9.6% from the previous year, and palladium output from recycling increased by 14.4% year-on-year. The overall demand is anticipated at 11.15 million ounces, up 11.4% from 2020.

As 90% of mined palladium is a by-product of other metals, this has made visibility into supply and accumulated above-ground stockpiles extremely limited, said PGMs processor and trader Heraeus in its palladium standard report published in September.

Palladium is mined as a by-product of nickel in Russia and of platinum production in South Africa. As a result, Heraeus’ palladium supply and demand forecast differs from Johnson Matthey’s data published in May. Heraeus expects global palladium production to increase by 6% yoy to 6.77 million ounces in 2021 and recycling output to rebound by 15% to 2.76 million ounces. The total palladium demand is forecast to grow by 9% to 10.03 million ounces.

According to Heraeus, the disruption in the automotive sector caused by the global semiconductor shortage is expected to last into 2022.

“Automotive demand has been repeatedly revised down as the post-pandemic recovery in light-vehicle production has been hampered by a shortage of semiconductor chips that now looks set to drag on into 2022,” wrote Dr Ralph Grimble from commodity consultancy SFA Oxford in the Palladium report.

The report cited that an estimated 3.7 million units of light-vehicle production were lost due to the shortage of chips, which is equivalent to 517,000 ounces of palladium not used in the autocatalyst.

Dr Grimble wrote the lost production and lower demand “[is] going to be worse than that by the end of the year.”

As a result of the weaker automotive demand, analysts have cut their palladium forecast for the next 12 months.

According to a Reuters poll conducted in late October, analysts and traders have lowered their price forecasts for palladium this year to an average of $2,050 an ounce in the fourth quarter, and $2,150 an ounce in 2022.

Amid the on-going problem with semiconductor shortage and recovering production from Russian producer Nornickel, Heraeus forecasts palladium to average at $1,950 an ounce over the next six months.

“By-product metals such as silver and palladium typically either boom for longer (than their primary sister metals) or bust for longer given this in-bred [supply] inelasticity,” said Heraeus.

Several analysts have downgraded their palladium price forecasts in the next six to 12 months because of the weak automotive demand related to semiconductor shortages. However, analysts’ forecasts can be wrong and have been inaccurate in the past.

Remember to always do your own research. And never invest money you cannot afford to lose.

Unlike gold, palladium is both an industrial metal and safe-haven asset. Rising demand from autocatalytic applications due to stricter emission standards is expected to support palladium demand in the medium-to-long term, but vehicle production constraint has weighed on prices.

Whether it’s a better investment than gold or not will depend on your investing goals and portfolio composition. You should do your own research and never invest what you cannot afford to lose.

Rate this article
Rate this article:
72% 28%
Ready to get started?
Capital.com Download
The difference between trading assets and CFDs
The main difference between CFD trading and trading assets, such as commodities and stocks, is that you don’t own the underlying asset when you trade on a CFD.
You can still benefit if the market moves in your favour, or make a loss if it moves against you. However, with traditional trading you enter a contract to exchange the legal ownership of the individual shares or the commodities for money, and you own this until you sell it again.
CFDs are leveraged products, which means that you only need to deposit a percentage of the full value of the CFD trade in order to open a position. But with traditional trading, you buy the assets for the full amount. In the UK, there is no stamp duty on CFD trading, but there is when you buy stocks, for example.
CFDs attract overnight costs to hold the trades (unless you use 1-1 leverage), which makes them more suited to short-term trading opportunities. Stocks and commodities are more normally bought and held for longer. You might also pay a broker commission or fees when buying and selling assets direct and you’d need somewhere to store them safely.
Capital Com is an execution-only service provider. The material provided on this website is for information purposes only and should not be understood as an investment advice. Any opinion that may be provided on this page does not constitute a recommendation by Capital Com or its agents. We do not make any representations or warranty on the accuracy or completeness of the information that is provided on this page. If you rely on the information on this page then you do so entirely on your own risk.
Share Article
Price overview in 2021 Supply and demand in 2021 Short-term palladium forecast downgraded FAQs